Sudama are special NPCs in Nioh 2. These corrupted Kodama are not naturally aggressive, but are very materialistic. Find and interact with these small spirits to trade items when in-game.

Pronounced “sue-DAH-mah.” A Kodama corrupted by the Dark Realm or Twilight is transformed into a uniquiet spirit known as an aratama. Fortunately, the Sudama does not show a predilection for violence, as its original form never bore ill will towards man. Instead, it displays and unusual attachment to all manner of material belongings. If you don’t mind relinquishing something you own, toss it to a Sudama and see what happens! 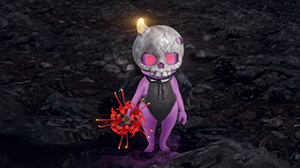 While the Sudama show great interest in human possessions, each one can favor vastly different things. A sudama that receives an item to its liking will demonstrate immense happiness, and has been known to gift its benefactor with a precious item in return. The converse is also true – one who presents a Sudama with something it despises will incur its monumental wrath and invite punishment for their transgression. To lose one’s life in this way would sadly and surely be some cosmic joke. As with all other things in life, pranks on a Sudama should be carried out in moderation.

All Sudama Locations in Nioh 2

Find the sudama and trade to receive items:

An Error in Calculation

Prisoners of the Stones