This is my guide how to defeat the final boss. I’ve beaten him 6 times(monsoon and no artifacts) and i think the fight is pretty easy for range characters but because people are having trouble with him and think is he too strong i am making a guide. Also this is for range only because i play only with range so i dont know if it works. You can try it but i dont think it will work.

Alright,if your reading this then you probably died to the fourth stage of the last boss.You think its impossible its a bad design for a boss and it should be changed.Thats what i though after i got destroyed the first time but after i killed him on the second time i think the boss actually has a pretty good design.The fourth phase is something very different from anything else in the game and thats why a lot of people dont know how to deal with the situation that or they are too tunneled vision on the boss.The fourth phase is a shocking change of power level and you need to adapt really fast. In the start of the phase he is much stronger then you. This means dont face him straigh up. He is really really slow in that phase for a reason instanly run for cover instead of trying to burst him when you dont have the damage.As i said he is slow moving so if your far away in cover he cant catch you.The fight is all about cover and slowly getting your items back.It’s not a dps test,it’s not how many good items your giving.

How to Defeat Him

I mainly play rex and i think he is the best choice for the boss but this should work with any range character.On phase one and three with rex you can simply root him.For some reason he doesnt ignore it like every single boss in the game.If he comes close just push yourself with your utility skill and run until you have your root back up.Then just lay on him.He cant move and cant hit you so it’s just point and click from then on.The only danger is his bullet burst(which shouldn’t be a problem with rex cuz of his sustain) and his little triangular attack(this one is dangerous and should be avoided).There is also the stomp but yea that should be obvious how to dodge it.With other characters diffrent from rex just keep distance and keep yourself in the air as much as possible,he cant really hurt you there except with the burst and the triangles.Second phase just stay in cover focus the little gunships.

I found 2 ways to kill this phase.

The first way is to be on the 3rth loop, have 120 items and burst him before he can take your items.

The second way is to instantly take cover on the sloped platforms. There he cant hit you with anything. 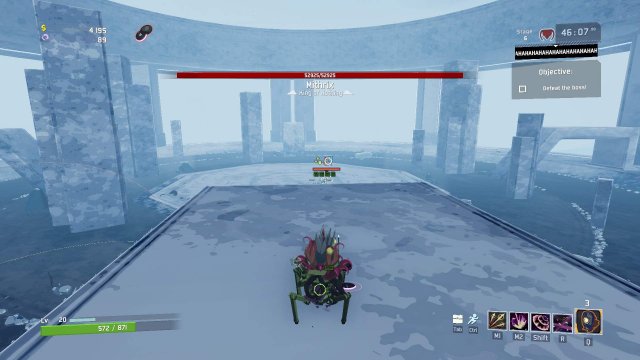 From there he will shoot you with his little burst of projectiles. That has a cooldown so to speak and then he will do his little ball stomp move. When he does that peak him from the edge and start shooting him. 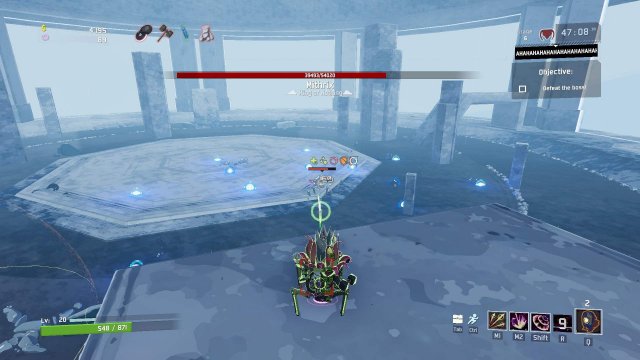 After that go back in cover and wait his projectile burst. Do this until you have the dangerous and essetial items out of him (when you deal damage he will drop your items one by one.It’s actually pretty cool beating your items out of him). From there just end the deal. Again for this phase i think rex is the best because you will be shooting him from a long range and his bramble volley has no damage fall of so you can deal high damage even from a far but in anycase even if you dont do much damage he still will give your items back. If your lucky with his movement you can find an angle where you can shoot him and he cant shoot you back in that case just lay on him but you still should be careful. 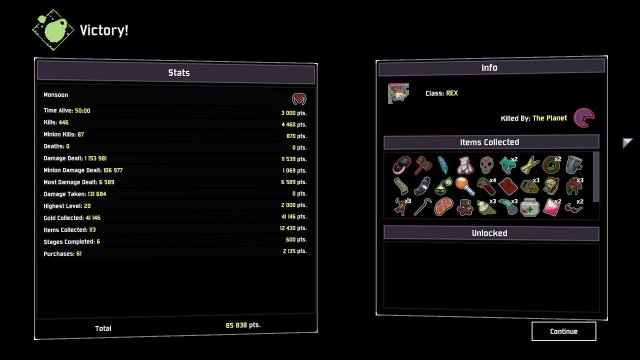 I’ve done it multiple times and it doesnt matter if you rush it or do it slower, if you have a good build or not. And in my opinion you dont need build specifically for him. You can go around and pick up every item like me and still win. If you really having problems with him you can play on lower difficulty or use artifacts such as command and sacrifice. In the end this game is about having fun. If you dont there is no point dont let nobody tell you how to play and on what difficulty you should play.

Risk of Rain 2 – How to Unlock All Characters

Other Risk of Rain 2 Guides: How to Unlock REX. Beginner’s Guide (Tips and Tricks). Altar of Gold, Gilded Coast and the Aurelionite. How to Restore Your Unlocks. Shrine / […]

Risk of Rain 2 – How to Become Immortal

Other Risk of Rain 2 Guides: How to Unlock REX. How to Unlock All Characters. Beginner’s Guide (Tips and Tricks). Altar of Gold, Gilded Coast and the Aurelionite. Shrine / […]