This guide covers some basic information that should be useful to new players. This includes tips for scoring, when to push a creature, effective creature placement, and a few other miscelaneous items. Many of these are either briefly touched upon in the tutorial or not at all, so this should help you to be a better and more effective teammate.

Greetings, I have been playing Gigantic since the recent Arc beta and have 50+ hours in game at the time of writing this guide. I am by no means a master, but I am above average on several of the heroes. There are many intricacies to the game that could very well take hundreds of hours to master, that said, there are others that can be learned quickly and will increase your effectiveness significantly if you are a new player. This guide will cover things like the intricacies of the power scoring system, when to push a power node, map awareness, creature placement, and basic gameplay tips.

Being aware of your immediate surroundings, like that Tripp you just saw who ran around behind one of your points is not good enough. You need to keep an eye on the area map too! It provides a lot of useful information that is usually a good idea to be aware of. 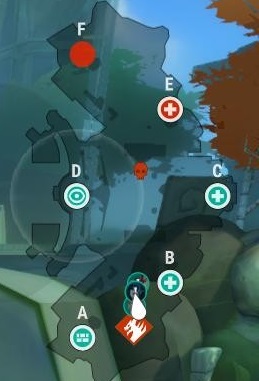 How to Read the Map:

Other Heroes and the Map:

What Creatures to Summon Where and When

There are several creature families in Gigantic, all (well, most…) have their uses. But all are situational! That means summoning the wrong creature on the wrong point or upgrading to the wrong level 2 creature can actually be a significant detriment to your team. Once you upgrade to lvl2 you are stuck with it until it dies.

So, you summoned a Bloomer on a forward point and now you have 1 Focus and that lvl1 one Bloomer could be a lvl2 Bloomer in just a few seconds. *whacks you with a newspaper* Bad! For a forward point you want something with a bit more bite and ability to defend. A Cyclops or better yet a Cerberus would be way more useful. Not only did you just waste Focus on something that can easily be killed, now your teammate with 2 Focus and Shadow Cerberus equipped can’t summon a much more useful defender creature. This section has advice on creature strengths and weaknesses as well as placement.

Scoring power to cause your Guardian to rampage and attack the other team’s Guardian is the heart of the game. Unfortunately, some of the intricacies of how power is scored can be a little confusing to new players. Why did the other team’s Guardian rampage when you had more power before orbs were collect? What happens when you get killed during an enemy team rampage? This section should help to explain those ideas and others.

When to Push a Point and When Not to

This section could also be title – “When to push your luck and when not to”. Because that is what it boils down to. A cost benefit analysis should be running in your head whether you are tying to get a kill, trying to kill a creature or trying to steal an orb. This section offers tips on when you should push your luck and when it might even be to your advantage to die so long as you can score power.

When you should push your luck getting a kill:

When you should not push your luck:

These are of course recommendations; it is up to you and your best judgment when to push your luck in other situation. That is part of learning the game over time.

I’ll wrap up this guide with kind of a grab-bag of useful tips that I wish I would have known when I started playing. They are not really in any specific order or groupings, but should be useful when you are just getting started. This section will likely be added to in the future as more topics come to mind.

A Charnok guide for beginners and players who don’t know how to build him. Other Gigantic Guides: Gameplay Tips for Beginners. Voden Guide. Crowns and XP Guide. The Build (Skill […]