One strategy I came up with for the strategy “How to Deckbuilder” which relies on the Thornfruit starting relic.

Guide to Obtain How to Deckbuilder Achievement

This guide is about one approach you can take when tackling the achievement, “How to Deckbuilder,” one of the rarest achievements found in game.

If successful, your final boss-fight should look like this: 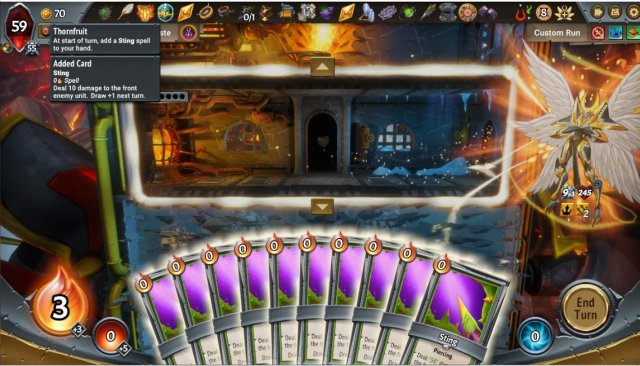 Right off the start, pick the following mutators:

Pick the Awoken/Hellhorned combination with their exiled heroes. (The achievement should be doable with the basic Hellhorned champion, but the Queen’s Impling does more damage and can combo with stuff like Implosion to help with early game).

Use Covenant Rank 0 to go easy on yourself.

At the start of the game, keep rerolling until you get the core artifact to this strategy:

Start off by yeeting all your Rootseed starter cards with Yeetpocalypse.

Always pick routes with Artifacts (Herzel’s Hoard). Your second best bet is Unstable Vortices to get rid of even more cards.

Skip on all cards, with a few exceptions: 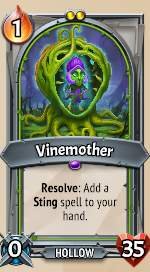 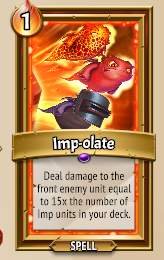 Imp-olate, which gives you a whooping 75 damage right off the bat to help smooth out your game before you can super-boost your Stings.

Pick up all Artifacts (even ones that seem useless, since this would remove them from the drop pool), with the  Volatile Gauge as the obvious exception.

Avoid challenges which give your opponent Armor or Health Restoration, as those are particularly difficult to get through with just Stings and weak units (Obviously, if you got Thorn Casting early, it makes the Armor ones a cakewalk).

Feel free to improve your Imps or Stewards with particularly-strong enchantments like the Largestone, which makes them a valuable asset at beating some of the stronger enemies.

The Boss Artifacts don’t usually matter but I went for +1 Ember and then +1 Slot for my runs, since the early Ember helps when your deck actually costs something to play, and +1 Slot allows you to play more Imps on the same turn.

Right before the boss on Floor 6, the Crystal Caverns should yield a random event which gives you the artifact, Frozen Nostalgia (At least it happened to me in all 3 of my attempts):

Before Floor 7, you should have a mostly-empty deck with the exception of some of your Imps and either Imp-olate or Vinemother.

At Floor 7, you have a chance to earn 400 coins if you enable the Seal. Make sure to do so as Floor 8 will have a Trinket shop, your last chance to get your missing Sting relics.

If you have Imp-olate, also make sure you have the requisite cash (375 coins to get rid of 5 cards with the Guild Marker, 500 without) to remove the rest of your deck.

If all goes well, you will go into the final fight with the following relics:

These 4 are the only required relics to beat the final boss fight, but the following relics will be a nice icing on top:

Before you go in, double-check that your Deck is completely empty. You won’t get another opportunity to yeet your last card even with Yeetpocalypse.

At the actual boss fight, start by Stinging enemies at the highest floor. You can skip low-attack targets and let the Pyre handle them, if it has enough HP.

This is only one of the viable strategies to approach the challenge, with another one being Pyre-centric (with Heaven’s Gold and Vapor Funnel). However, I find this strategy to be fairly RNG-consistent with getting the key Artifacts somewhere along the way and having a far smoother early-game.

Best of luck to those who want to attempt this! For the record, I cleared the challenge in around 5 runs with one of them failing because I thought I can get away with 1 real card on Floor 8.