Compact production chain layouts for most common products that need to be made indefinitely.

Since the game exists on a square-ish grid mapped to spherical surfaces, the grid is mostly square but exhibits ‘grid crush’ closer to the poles.

Many buildings have two different bounding boxes in practice- how closely you can squeeze buildings together, and how close you can place belts.

Regarding grid crush vs layouts: 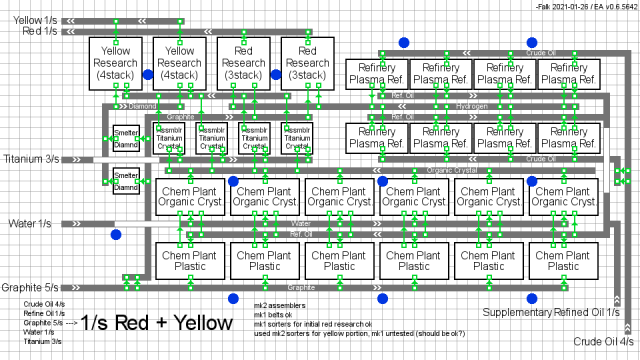 The feedback loop for Hydrogen is cool, but virtually useless in the game right now. When starting Red Research, the game needs more Hydrogen than Refined Oil which makes the loop appealing, but this lasts about a few hours at most and then the game swings over to needing far more Refined Oil than Hydrogen for Yellow Research, Sulfur etc.

By the time it swings around to needing Hydrogen again late-game you can have a couple dozen Gas Giant orbiters for a virtually infinite supply as fast as you can use it up.

It does have its use at absolute endgame, but hilariously enough it’s for getting an infinite supply of Energized Graphite after Coal runs out. 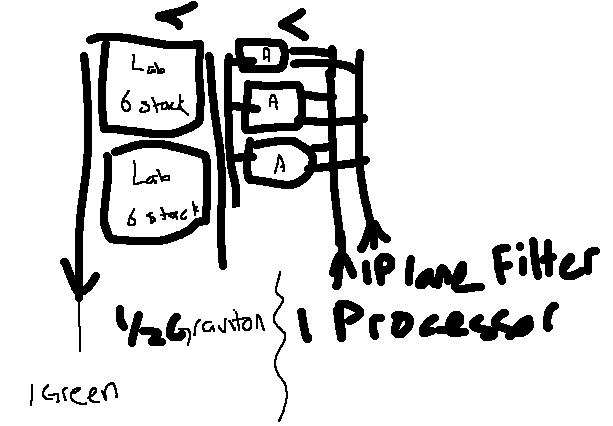 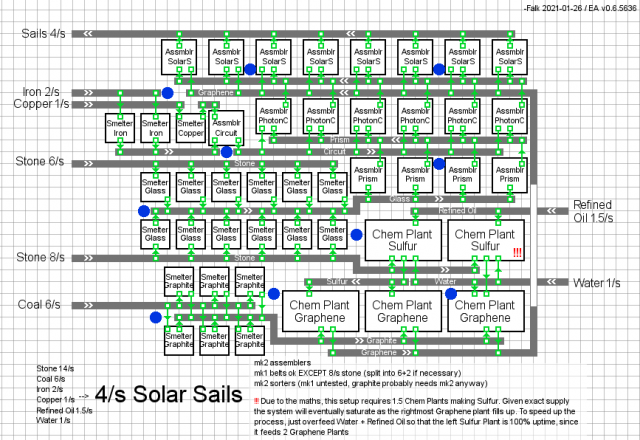 4/s is plenty to get a swarm going. If you have enough guns to shoot them all into space it should result in ~6k active sails in the swarm, going up to ~10k and beyond as research extends their lifespan.

As Crude Oil is an infinite resource but a finite rate (which is clearly shown on the map display*) one of the most useful mid-game tasks is to tap every single node and siphon the oil to a single location, whether a massive processing plant or a main bus or a belt running completely around the world. Since there’s only one thing Crude Oil can be processed into, that gives an understanding on the upper cap for Refined Oil the planet yields, which also then translates into how much Sulfur, Organic Crystals (and eventually Graphite, if/when Coal has completely run out) combined, which then helps plan what can be produced at the same time from all the major branches off Organic Crystals (Titanium Crystals) and Sulfur (Titanium Alloy, Graphene).

*My understanding is Vein Utilization does affects the rate for Oil, unsure if direct +10% stacking addition per level. 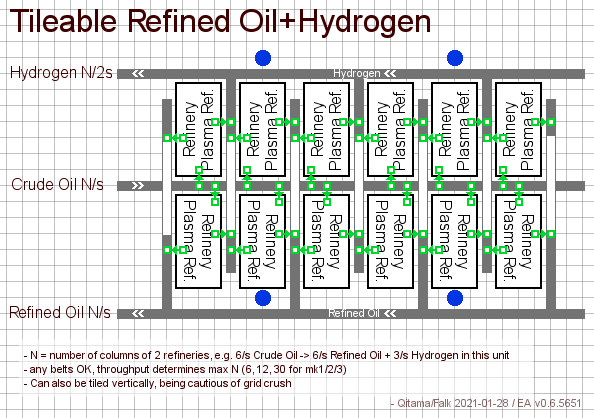 Extensible setup based on belt speed.

Turbines are used in a lot of medium and lategame recipes as a part and thus make for a good candidate for manufacturing en-masse on a different planet. Pick one with lots of iron ore. 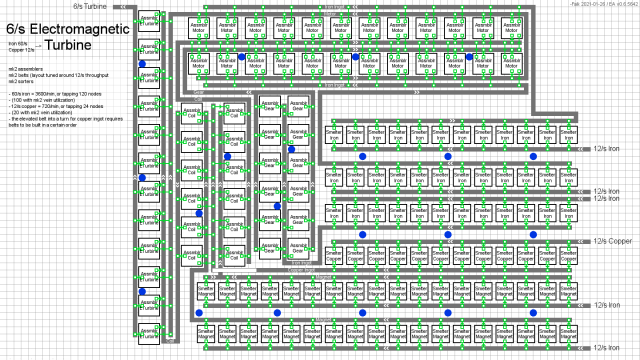 Large-scale processor manufacturing meant to be made on a planet with lots of silicon for exporting elsewhere. 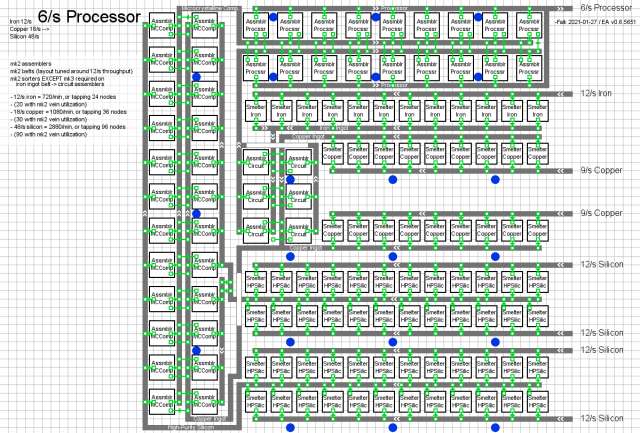 Replied regarding queries in comments, thought I’d placeholder in the guide itself so it doesn’t get lost when comments scroll.

Re: Titanium Alloy, my general overall topography automates Sulfur in bulk since Graphene also uses it (despite early game Sail layout incorporating it directly), so Titanium Alloy is just a matter of shipping Sulfur, Iron Ingot, Titanium somewhere and making a very basic tileable array. This is after Logistics is automated so this can be plopped down anywhere.

I’ll probably get to raw mats -> alloy at some point with correct ratios, just not so soon while I work on other things.

In the meantime this is what I’m doing if it helps.

Full credit goes to Zanthra for this layout. Used with permission. 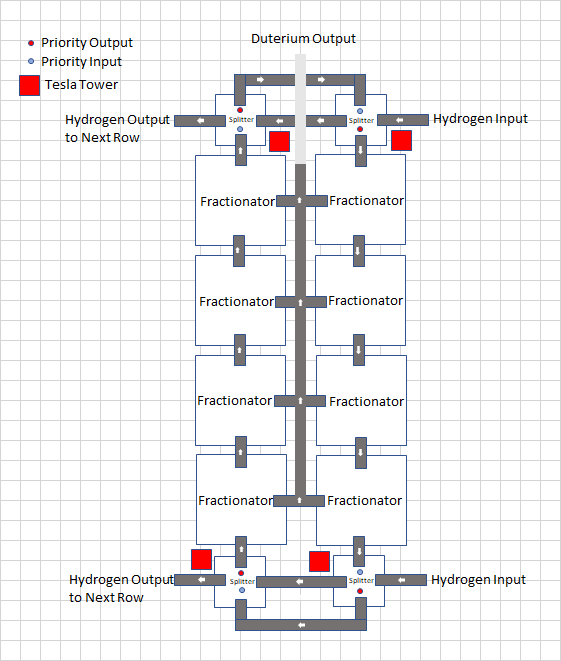 Tileable both horizontally and vertically, with each unit processing roughly 2.4/s Hydrogen into Deuterium with mk3 belts. One space of padding is needed when tiling vertically to fit the Tesla Towers.

Particle Broadband is a bit of a weird bottleneck since automating some makes mk3 assembler production much easier, but at the same time the large number of Assemblers can also make use of mk3’s higher production rate. 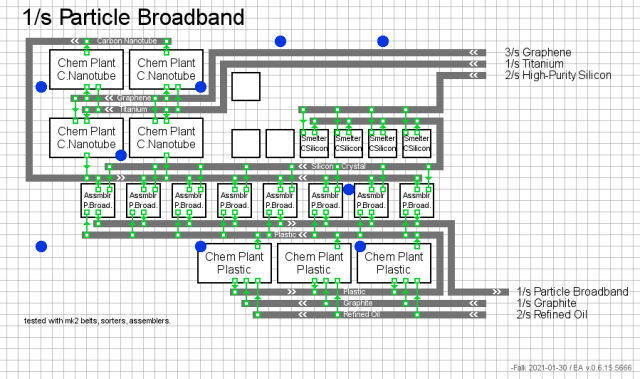 Followed by a direct upgrade (leave space on the left) to 3/s layout.

The reason the plastic exits downwards and loops around is that with mk3 assemblers, for a good part of the belt each Plastic Chem Plant is making 0.333/s but ends up trying to feed two mk3 assemblers that use 0.375/s combined, eventually underfeeding them while uselessly backing up plastic production towards the left of the row. Having them all exit onto a belt before hitting the first Assembler rectifies that. 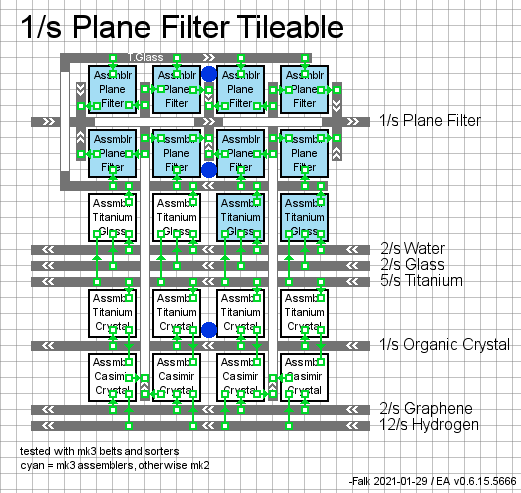 Hopefully this helps to make the ridiculous number of assemblers neater.

This is probably way too much power draw when first teching into Green research.

Remember 1/s Green only requires half as much Graviton, which is half of this layout.

I hate splitters. I hate having to carry yet another stack of ♥ around. I hate that they’re bulky. I hate that this layout uses it in the most inelegant fashion but if it works, it works.

I’m pretty sure there’s a better way to do this, but for the sake of filling in the gap in absence of anything better, here’s the layout I went with for scaling up. 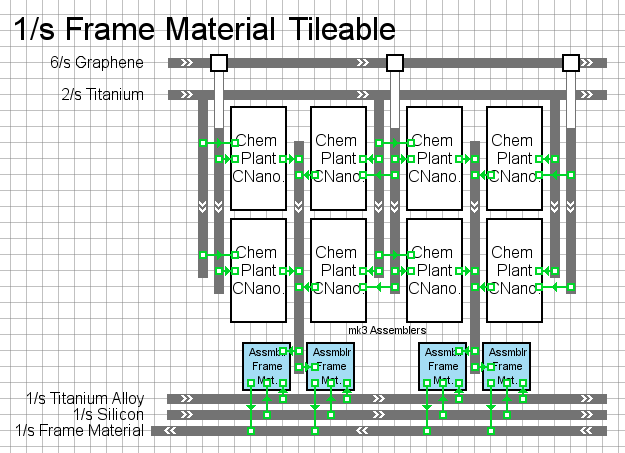 Gonna take a moment to appreciate we’re now mass-launching rockets into space to build a megastructure that literally drains the sun and yet still using mk1 power poles.

Probably best to scale up slowly with this one. See also: Frame Material and Plane Filter. 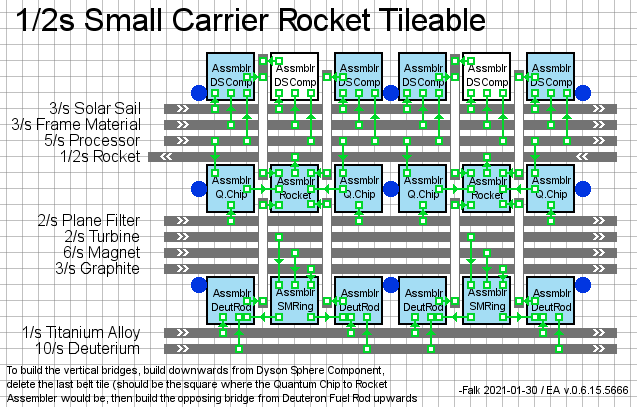 Also if it helps any, what I did was assign a big open area to be my rocket building area, divided by the equator (where my railguns also are).

The four main sections represent quads and extend outward as much as power and incoming supplies can handle, with more stuff coming in through the supply line north and south and topped up by offworldlogistics (processors, turbines, etc).

(If you’re wondering why my Plane Filter tiles right to left, this is actually why, lol- the rocket quadrant tiles “left to right” because it’s flipped upside down with “up on the diagram” pointing south since it’s on the other side of the equator).

This is a relatively bad location (blocked by ore and some other stuff lol) but I built here off my frame material layout experiment location to illustrate.

The spaghetti in the center can probably be cleaned up a lot but it works so I don’t feel the need to touch it for this run.

I generally only group buildings together for the mall. Parts/products do exist in storage boxes but are generally all over the map closer to where they might be needed, which admittedly is probably a bad idea vs having it onhand to quickly grab stuff for handcraft newer buildings.

Here are layouts for the stages of the mall I use, showing roughly how much empty space to leave for e.g. the Motor Assembler that feeds into mk2 sorters.

As with Factorio, it’s a very good idea to keep the inputs for these completely separate from other production lines. As tempting it may be to e.g. pull the ends of the lines here to start making more parts, it usually ends up a bottleneck or other problem. Just set up more miners/etc to make new additional lines for indefinite manufacturing.

The inputs generally consist of parts that want to have been automated en-masse by that point. Putting down a Logistic station requesting them keeps things neat (hence the groups of 3). In terms of input throughput “A full belt” should be good enough for the lower-tier parts. It probably is worth upgrading the mall with mk2 belts, mk2 sorters and mk2 assemblers when they become available.

As with Factorio, good idea to limit the storages to a few stacks so the Mall isn’t constantly burning parts/energy which is impractical to use all at once anyway. 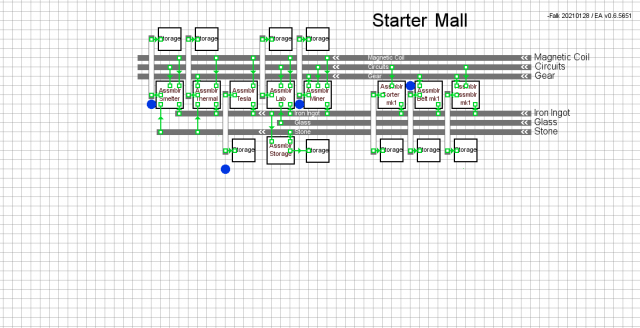 The input belts are grouped by (iron + copper), (iron), (stone) as sources to make it easier to plan where the input parts are being made as early game belt availability is a bottleneck. Additionally, Magnetic Coil and Circuits being grouped on the outside makes it convenient to pull for Research temporarily before setting up a more permanent Blue production line. 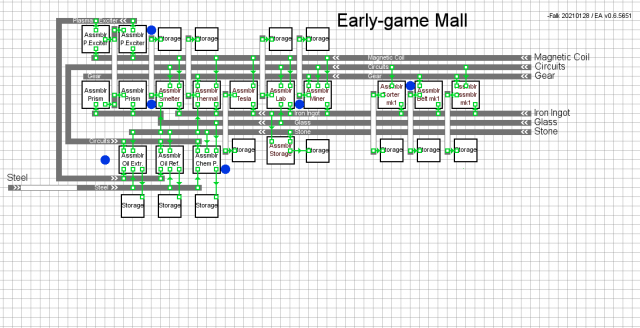 I somehow missed water pump- will probably go back and add it later. 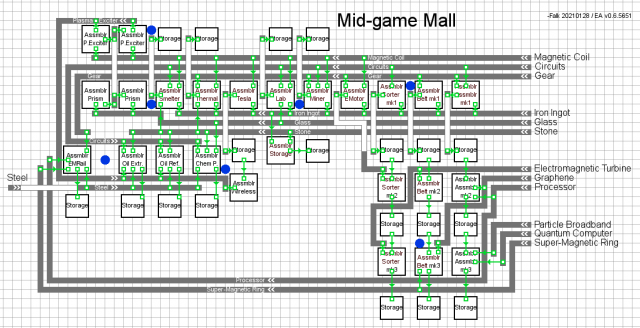 From this point automation is up to what gets used most often. Good candidates are

These are my own notes- was asked by a couple folks to post it but I don’t plan to really maintain it like the layouts themselves lol. How suitable they are depends on your own playstyle. I generally do not main-bus except for oil and oil products as a little concession to hydrogen management and disposal.

Hopefully they help SOME folks though!

Plan on interplanetary mass production and shipping of:

Become the master of sorter and belt with math. ContentsGuide to Math Analysis of Sorter Efficiency on BeltIntroductionBackgroundBelt Slots and Sorter DelayExtended Sorter Delay and EfficiencyProbability vs Expected DelayA-Factor EstimationExpand […]

Dyson Sphere Program – How to Restart the Game Without Losing Progress

Easiest way to restart the game, not even hard, many do it by accident. Guide to Restart the Game Its the Simple Things (How to Warp Out) I shall tell […]

This guide shows how to make each Electromagnetic Matrix Efficiently. Each design will be tile-able, and make 60 parts/m. If you tile each design 6 times, you can fill up […]