Achieve victory while playing as the western roman empire on very hard.

This campaign is typically regarded as one of the hardest in total war history. It will require that you know practically every trick in the book to win. The situation is also quite unique compared to every other total war game. Instead of starting with one or two settlements and trying to grow out you instead start with a lot, but its all falling apart. It is, as game warns you ; very hard.

Fear not though! In all my hours of playing Total War it is my favorite campaign. Resolve to find all your strategic, logistical, and economic grit and lead the Roman empire out of the darkness! Roma invicta!

An excellent Youtube series to compliment this guide is the Legend of Total War playthrough as the Western Roman Empire. He is a much better player than me, and he plays the campaign masterfully.

I tend to pick Paganism, as many of the settlements already are Pagan, and more family members are pagan. Whichever religion you pick you must do the following on your first turn :

One of the most important things to realize is that if you destroy an enemy utterly they have no chance of coming back. You must strike the various small barbarian tribes before they grow to insurmountable numbers. Attack while the iron is hot! Don’t turtle too much.

The celts must be eliminated, and quickly. This can be done with the armies you start with in Britannia and some Mercenaries. Their troops are vulnerable to ranged attacks and they generally don’t have good cavalry. Eliminating the celts will ensure that Britannia is left unaffected and will continue to pour money into your coffers. There is no reason to abandon it.

These savages must be exterminated as quickly as possible. They start with only one settlement and don’t spawn a horde when they are conquered. It can be done with a couple Comitatenses, archers, and Limitanei.

They are a bit harder to kill, as when they die a horde will spawn. Additionally their starting settlement is harder to get to. Fortunately the franks do not have any of those nasty horse archers. They also tend to spam heavy cavalry / infantry. When you do capture their capitol a horde will spawn. Refer to the horde guide for dealing with hordes.

The Saxons will not spawn a horde when killed, but they are more out of the way than the others. They are also not very dangerous as they tend to only spawn generals and heavy infantry. By the time you can attack the Saxons you should have plenty of archers, spearmen, etc.

These guys are a total pain in the ass, as their settlements are far apart from eachother. Fortunately they don’t pose much of a threat if you lose all of Africa to rebellions. You can then crush them at a chosen date later when you have the opportunity.

6. The Goths (and the Ostrogoths).

These ones are actually really hard to kill, as they are very out of the way and their units are formidable. Fortunately, you can complete the entire campaign without finishing them off. If however they give you no choice you know what to do.

Those Damned Hordes! (The Big Tribes)

The more threatening barbarian tribes are numerous, and if all the hordes spilled into Roman territory at once you would have no chance. Fortunately, they are likely to fight one another and therefore only attack one at a time. You may also get lucky if the Eastern Roman empire is unable to repel one or two of them.

Above all, make sure to pick the location of battle yourself through careful choice. Do not let them dictate your strategy. It is YOUR territory they are intruding on, after all.

The trick with defeating large hordes is to keep them concentrated in one location on the map. Every single turn you can distract them by sending out a single cheap cavalry unit. This cavalry unit will make them aggro, you will be able to retreat. This will waste their movement for that turn. If you do this consistently enough it will give you enough time to slowly chip away at the horde. Take engagements with individual horde armies when you can separate them from the herd.

If the horde does manage to all attack one settlement make sure not to let them take it without total hell. Fortifying any town center with spearmen, archers, and a general can usually kill 3 to 5 times more men than they consist of. Remember that although you may lose a settlement, the Horde only has so many members. The horde can only replenish if they decide to settle down (or hire mercenaries, which the AI never does). They can only conquer so many settlements where they lose 3,000+ soldiers.

Make sure that when you win a battle and they route, you chase them down and kill as many as possible. Having cavalry is absolutely crucial for defeating a horde. Roman heavy infantry can be nice in choke points (like in settlements), or in forests where they are protected from arrows. However in open plains against horse archers they typically stand no chance. Foot archers can go toe to toe with horse archers, but barely. Siege units are too expensive / slow to feasibly fight a horde.

The caveat is bridge battles. If you can manage to fight a horde on a bridge with onagers, archers, spearmen, and heavy infantry then you can absolutely slaughter a horde in open combat. Do not opt by default to defend a settlement in a siege battle, as that takes away your initiative to dictate where the fighting happens.

You can also use night battles to your advantage. Night battles will prevent the enemy from calling in reinforcements. This can allow you to fight one battle at a time if you have a large army that is capable of going toe to toe with one horde army at a time.

Do not make any diplomatic dealings with the hordes, as they cannot ever be trusted. Opt instead to exterminate. Secondarily, don’t attack without provocation. You wan’t to make sure that your reputation is not ruined by aggression. However, once the fight begins show no mercy.

Lastly, and perhaps most importantly is to pick a good general with a lot of stars to lead your army that goes toe to toe with the horde. Keep your generals alive as they are incredibly valuable, especially if they have high command.

As for the particular different hordes, the strategy to beat all of them is basically the same. However, the huns in particular are incredibly difficult to defeat in open battle. The battle of attrition against them will be most difficult. You’d best hope they settle in the Eastern Roman Empire.

This is an example of using the horse sandwich technique. It will make practically any unit route instantaneously. 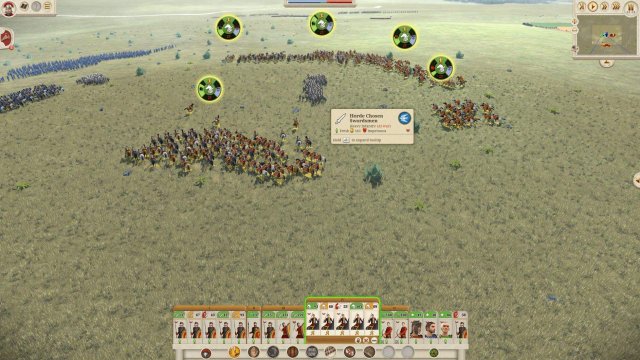 How Not to Go Bankrupt

Strategy and tactics in real time battle are mostly dictated by the unit composition you have chosen. To this end, pick unit compositions on a per army basis by what you expect them to do.

Armies that are made to defend settlements should have mostly spearmen, heavy infantry, and a few archers. One or two heavy cavalry units can be good too. Defending a settlement should (if you cant hold the walls) consist of camping in the center with tons of heavy infantry. The AI will have an extraordinarily hard time dealing with this, as their units will be exhausted by the time they get there for a big city. The legio spearmen are also fantastic for defense, especially in towns, bridges, and other choke points. 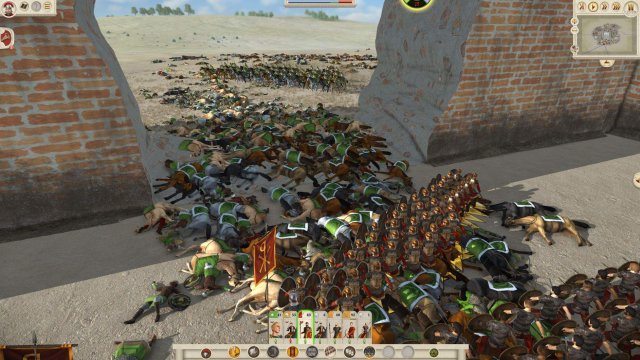 Armies made for aggressive tactics (open battle) should be majority cavalry, specifically sarmatian auxillia. Sarmatian auxilia is incredibly important, as they are the only heavy cavalry unit you can recruit in a reasonable amount of time that can actually go toe to toe with the hordes. They only work if you have them in huge numbers (8+ units of them). When you have that much Sarmatian Auxillia you can snowball huge clumps of heavy cavalry which will devour even spearmen when surrounded properly. You can also chase horse archers to the edge of the map and promptly slaughter them.

Limitanei should only be used if you need to fill some final slots in your army or as a garrison. They cannot be reliably depended on for fighting big scary enemies.

The Foederati spearmen infantry are cost effective, and great against cavalry. They should be your go to unit to use against generals and horses and general.

Comitatenseis are your bread and butter heavy infantry. Your armies that proactively go after barbarians should be ~40% comprised of them.

Legionary first cohorts are incredibly powerful but unfortunately can only be recruited in the Urban barracks. The urban barracks can first be bought in Rome at a steep price. They are however totally worth buying. They also provide a morale boost to nearby units which makes them a must have.

Archers are absolutely necessary to compliment any army. An army without archers will be defenseless against horse archers.

This is a fairly typical battle roster that can fight in the open field quite well. Horse archers are incredibly good, and should be the primary mercenary to recruit.

At the very end, you will have to fight the Eastern Roman Empire (If they survived). They will be quite formidable, and the only advantage you will be able to leverage against them is if you have a much stronger economy. Fortunately you don’t have to fight them for long as by the time you reach this point you should be very powerful.

In the end, if you lead the Western Roman Empire to glory on very hard nobody will be able to question your skill in Rome Total War or your E-peen! So do it! Its incredibly fun!

Total War: Rome Remastered – How to Be OP

A guide on the art of being way too powerful.  Guide to Be OP The OP Unit-Phalanx Hoplites are very powerful, and if they aren’t flanked or attacked in the […]