You just started playing and keep losing in singleplayer ? This guide will teach you how to easily win with the following nations: Germany, France, Romania, China, Brasil, Italy, Spain. If you learn to win with those nations you can win with almost any other nation. Each section has both specific advice as well as general advice.

This guide assumes you have finished the in-game tutorial with Italy.

Unlike other Paradox games where the larger army usually means victory, Hearts of Iron IV is much more complex. Although it can be successfully played by massing infantry, at least in singleplayer, a few tricks will make your singleplayer experience easier and also teach you some basics of the game.

Since you’ve finished the tutorial you already know how to move and produce units and how factories work, but the game has a lot more mechanics than that, I will not even scratch the surface here, I will only teach you what you need to know for an easy singleplayer victory.

The game is easy to learn and hard to master, once you get to know how divisions work in-depth, how supply lines work, and how air and sea combat works as well, you will discover a whole new game that’s especially fun in multiplayer. That being said, let’s learn how to beat the singelplayer.

The AI plays poorly and doesn’t do most of the things I will mention below, giving you a huge advantage over him.

Reduce your army to one division and then train it to farm army experience.

This may sound like a joke but it isn’t. Unless you’re playing Germany, Italy or Spain. As soon as the game starts, select your whole army and delete everything except for one infantry division. If you play with nations that have colonies such as France or UK check for troops in colonies too. Once you are left with only one division, assign it to a general and start training it. 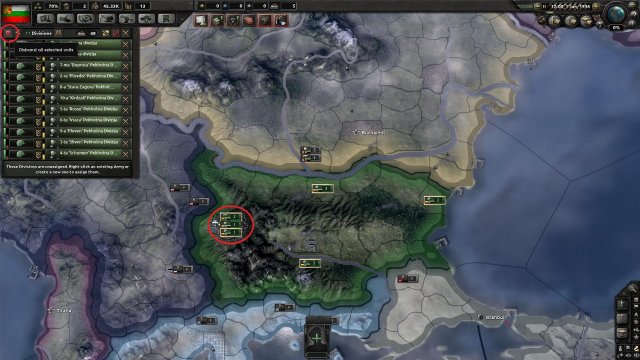 To quickly do this, select your whole army then hold SHIFT and click on the unit you don’t want to disband. Keep the infantry division that has as much battalions as possible, if you don’t know what a battalion is you’ll find out in the Division Designer section. 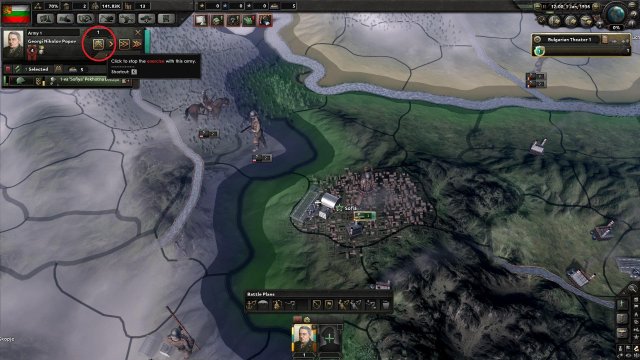 You don’t lose manpower or equipment, when you disband your divisions their manpower returns to the manpower pool and their equipment to the equipment section.

You don’t need to do this with Germany because you need troops in the field for focus trees, with Italy you can gain army experience from the war with Ethiopia and with Spain from the civil war. 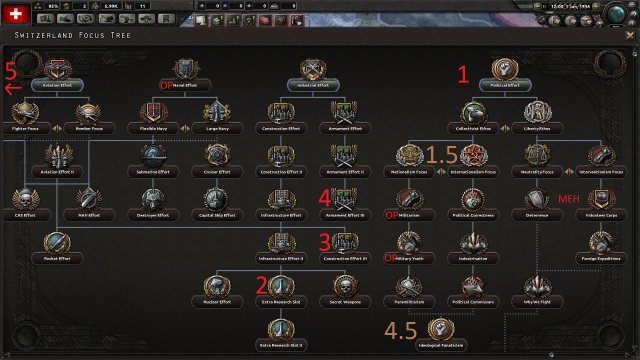 Start with the Political Effort focus for early Political Power. If you want to go Fascist/Commie go to Nationalism / Internationalism focus so you can get an early Fascist / Communist influence. If you don’t, follow the industrial path right away until you unlock another Research Slot. The research that other one that gives you 2 extra civillian factories. Then complete the military factories focus trees. Then if you’re fascist or communist follow the politica focus trees until Ideological Fanaticism. If now, start with the military focus tree right away, the equipment ones reduce the time you need to research infantry equipment and the land doctrine ones reduce the research time for land doctrines.

Research is basically buffs for your nation. Different nations start with different techs already unlocked but the difference is so small you won’t even notice. 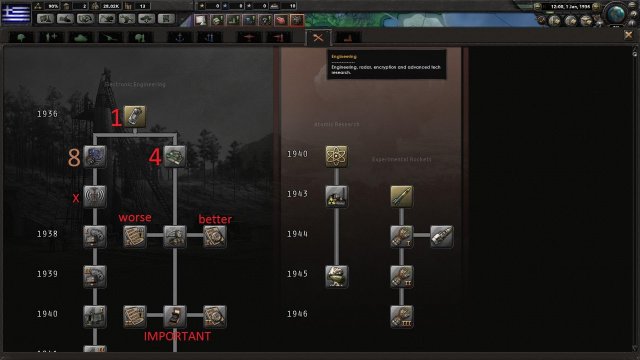 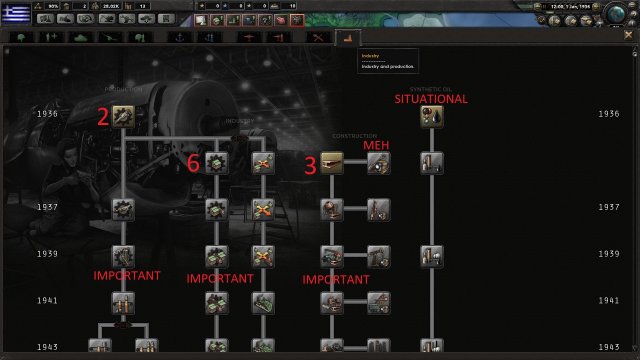 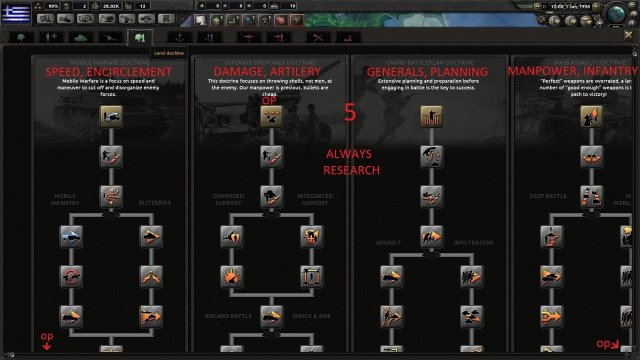 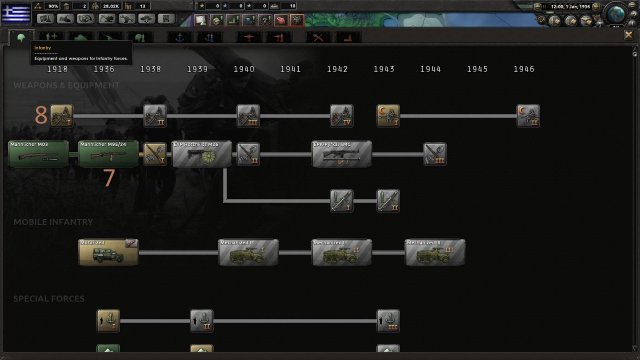 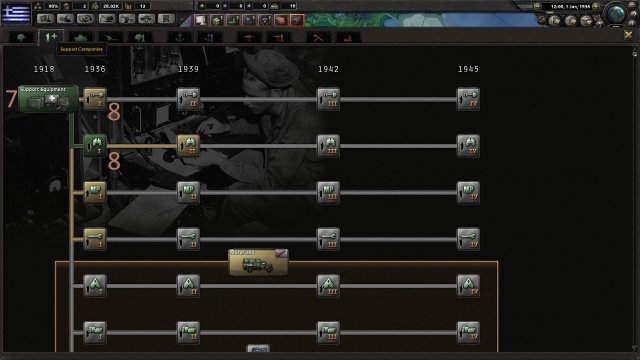 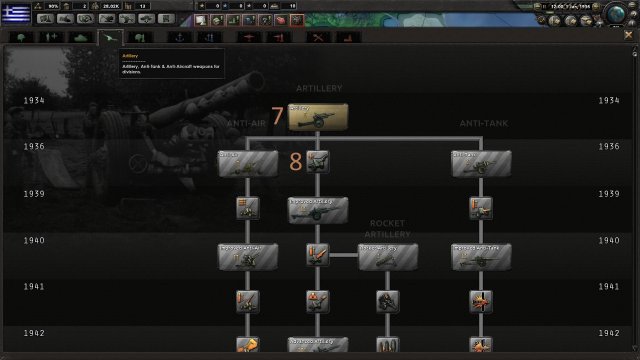 General guidelines after you finish the plan above:

Mobile Warfare is when you want to outmanuver the enemy and also has that juicy +2.00% then +3.00% at the end. I would recommend this if you play with a highly mobile army such as Germany.

Superior firepower is the most useful focus in 90% of the situations. But it doesn’t give you that +5.00 manpower like Mobile Warfare or Mass Assault.

Grand Battleplan is intereting and powerful if done right but rather rigid and if you don’t use generals well you have basically little to nothing. I don’t like this one because even if you use the generals right I’m still sure that the Superior firepower one is more useful. I would recommend this if you know what you’re doing and have everything prepared so you won’t have a new surprise front. The strength of this focus is on preparation.

Mass Assault is basically the Soviet Union in World War II, lots of troops that are despendable and don’t need much care, don’t need that much supplies and can survive longer without them, and you get that +5.00% really fast but the military focus also ends really fast. I would only recommend this if you play with a minor nation with small manpower and you desperately need manpower.

Once you reach 150 Political Power you can hire a minister. Each country has different types of ministers to pick from. If you don’t find the mentioned minister for the country you picked skip the step. 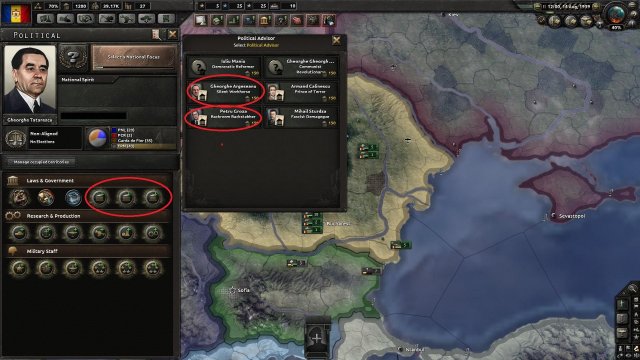 You can also check if your country has Old Guards in Navy and Aviation. They give you +0.20 more political power. However, they are rare. I only know of Czechoslovakia who has an Air Old Guard and Poland who has a Navy Old Guard. If you have both an Old Guard and a Backroom Backstaber, hire the Old Guard first. 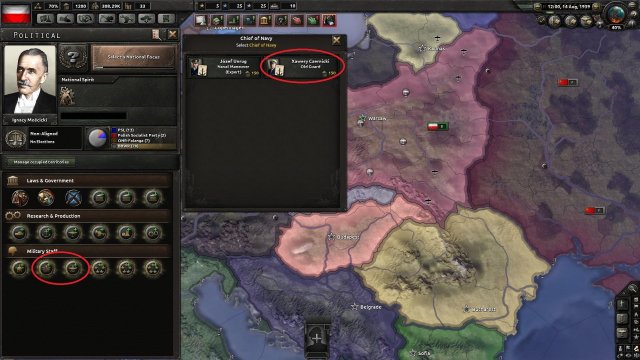 After you got all extra Political Power politicians you should now hire politicians that influence facist / communist / democratic ideology if you want to change ideology.

Hire a Military Theorist now. He gives you more army experience. Every contry has a military theorist. 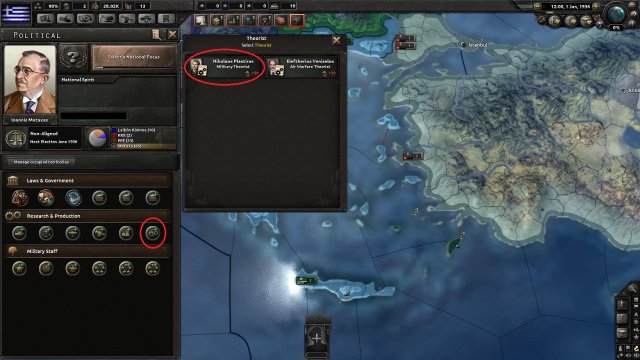 Now Industrial Concerns. This allows you to research industry faster. 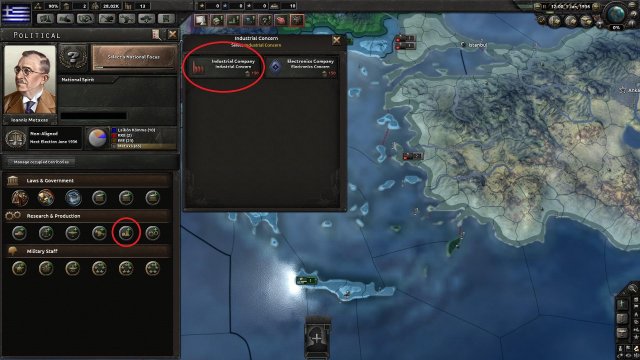 Now start with the army, first the Chief of Army then Military High Command. After that at least for the purpose of the singleplayer it becomes less important, you can pick the Infantry Equipment research reduction then the tanks, navy and air. 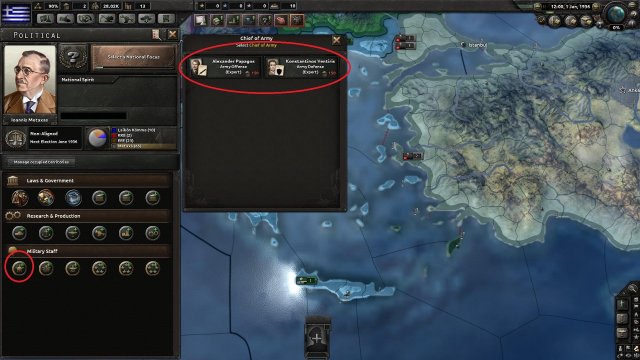 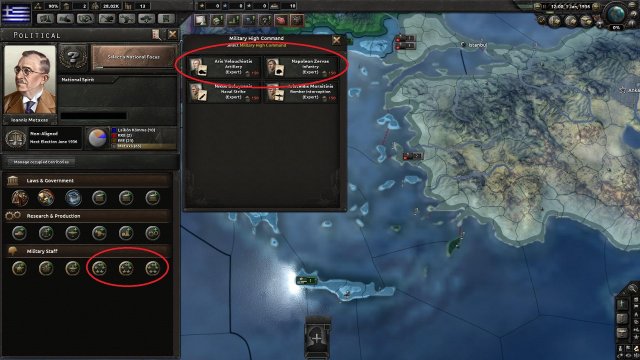 I left this one for the ending because it’s the most important yet the most ignored law by new players. It is even more important than Silent Workhouse – Economy Law. It makes wonders for your industry. It increases your construction speed by +20% (a lot) and descreases the consumer goods, the less consumer goods you have the more Civillian Factories will work in building new factories. By far the most important law. You will want to reach War Economy as soon as possible.

However, there’s a catch. Unless you’re communist or facist you will need: 5% World Tention for Early Mobilizaiton, 15% World Tension for Partial Mobilization and being at war for War Mobilization. In some singleplayer games, if you’re lucky the world tension will reach 6% after a few 70 days or so, keep your political power so you can pick Early Mobilization as soon as possible. Unless you’re playing Japan, at the end of 1937, Japan will declare war on China which will increase World Tension over 15% allowing you to pick Partial Mobilization. 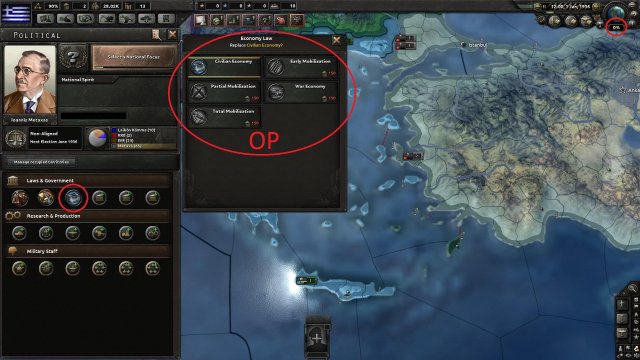 Also, whenever you’re out of manpower you can increase the Consciption Law (top left) for more manpower. The quality of your units doesn’t change based on the conscription law. When it comes to production I usually start with a few Weapons and a bit less Infantry Equipment then a lot of Artilery. If I notice I don’t have enough weapons or not as much as I need to train the troops I want I will add more Weapons / Infantry Equipment factories. It’s all about having a nice balance.

Notice the White/Red line in Production picture, that’s Production Efficency. When you make a new producation line the production efficency starts at 10% and gardually increases over time. The more Production Efficency you have for an item the more it is produced for the same number of factories.

If you are missing some resources needed for production the item will still be produced but slower. This shows how much equipment you have for each item. Everything that happens in production goes here. When you train new troops part of what is here goes in the hand of those new troops. What items and how much a division needs is mentioned in the Division Design.

If everything so far only gave you an advantage over the AI, this will make you wipe the floor with the AI because it’s one of the most important mechanics of the game yet one the AI doesn’t care about. Almost as if the devs wanted this to be a game simple in singleplayer yet complex in multiplayer.

Here is where you spend all that army experience you’ve been farming so far.

A Division (1 unit on the map) is made of regiments (columns) that are made of battalions. Regiments don’t affect the game mechanics at all, but it’s nice to know what a regiment is.

You can rename, duplicate and change equipment options of a division for free.

You can mark divisions as Reserve, Regular or Elite – it affects the order they get their equipment.

Support brigades have no effect on width or speed. Tanks need infantry to counter low organization.

Recon and Engineer are worth it for almost every division. Anti-air is useless in both support and front.

Your division should always have a Combat Width of 20, 10 or 40. (remember the magic numbers)

If your Field Marshal has “Offensive Doctrine” ability then you can have a Combat Width of 22 or 11.

You can experiment with Division Designer and learn from the internet a lot, but for the purpose of winning World War II in singleplayer you only need to know 2 infantry divisions: A 7 – 2 offensive one. 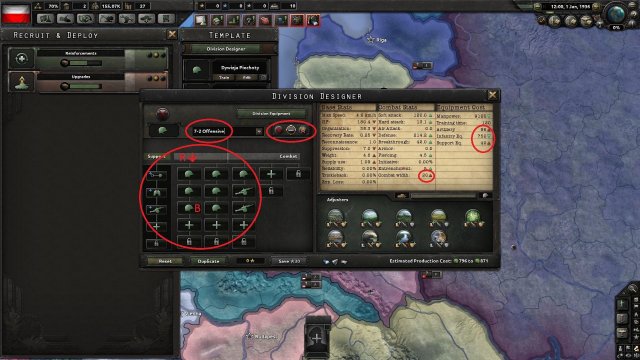 And a 10 defensive one for France and China in the early stages of the war. With these divisions your units will be superior to the AI’s units.

After you make your new divisions (the division you change should be the same division type as that only unit in the field you used to farm army experience, so that that division will change too) stop the training and start recruiting units of this division. Make sure you don’t do this within a few months before the war starts because you won’t be able to train as many divisions as you want right away.

How to Win with Various Nations

Additionally, if you want more allies before attacking Poland you can go for “Plan Z” focus tree and influence Netherlands, Denmark, Norway and Sweden.

Hello, in this tutorial I will explain you easy strategy for blitzkrieg as German Reich. Tutorial In the beginning we must build some military factories, and collect 50 political power […]

A small guide on singleplayer infantry divisions. Guide to Division Templates Basic Universal Templates 20 width Infantry Division If you are not new, or you watch any HOI youtubers you […]