Land Doctrines play an important role in warfare, often directing our playstyle and shaping the form of our army. But also there’s always some kind of questions and confusion towards “What’s the best land doctrine?” or “What should I use for this situation?” In this guide I’ll show detailed information about Land Doctrines, their effects and bonuses.

The Big 4: All Land Doctrines

Hearts of Iron IV gives the player a choice between 4 different Land Doctrines, each one of them with distinctive army approaches, making them effective on certain army builds and playstyles:

Also, every single one of them have its own internal paths, remarked as Left (L) and Right (R) from now on. 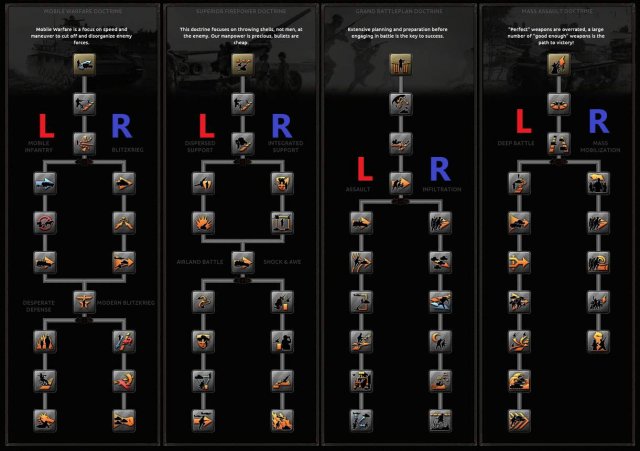 To make a detailed understanding of doctrines, we’ll be analyzing this topic as the following:

Mobile Warfare concentrates almost entirely in a highly motorised/armored army, using the speed and blindage of these divisions as a spear to break through the enemy lines.

Grand Battleplan is based around a defensive stance using infantry and a safer offensive style with plannings use.

Mass Assault Doctrine – A Weapon for Every Person

Mass Assault is made for a large army mobilization, manpower becomes a weapon.

A short, easy and funny guide how to form the Byzantine Empire in Man the Guns. 10 Easy Steps to Achieve Roman Restoration! After many tries, I finally did it. […]