A detailed guide on becoming a Child of the Moon as well as what abilities lycanthropy grants your character. 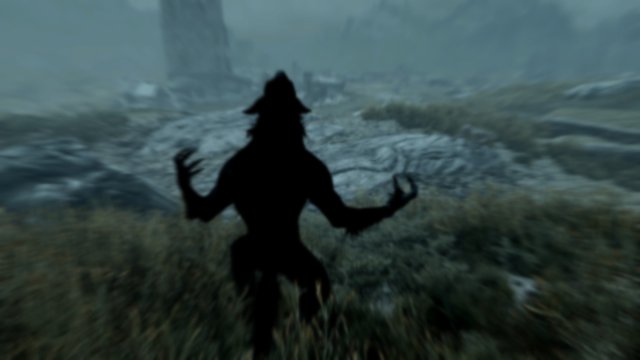 For those who don’t want ot be spoiled for the Companions questline keep going through the questline, the game will show you how to become one when you get to a point. You can skip this section of the guide until you get to the part of the Companions Questline involving Werewolves.

Spoilers for the quest where you encounter the Werewolves:

After you find out the Circle of Companions are Werewolves in “Proving Honor”, the next quest “The Silver Hand”, will make the place follow Skjar into a hidden cave under the forge by the Jorrvaskr. When inside Alea the Huntress has transformed into a Werewolf, Skjar will then speech about the history of their gift of Hircine.

He will ask for the permission of the player to proceed and he will cut Alea’s arm in her Werewolf form and her blood will pour into a basin to which you must drink from it. After drinking it, the character will blackout and become a werewolf out whiterun. In this part the player can stay within the area away from the guards and citizens because going out will make them hostile to you, however you will not get a bounty nor be hostile to the citizens and guards of Whiterun after the transformation.

After the “The Silver Hand” quest the player is free to be a werewolf.

Spoilers for End of Companions Questline:

If you have been cured you can turn back into a Werewolf by simply asking one of the Circle members of the Companions, Alea, Farkas or Vilkas (however if you cured Farkas or Vilkas they can’t give you beast blood anymore). After that you cannot ask to become a Werewolf again due to disrepsect to Hircine of curing your Beast Blood.

Powers and Abilities in Human Form

Even though the Werewolf Form is the bigger part of being a Werewolf, there are small changes to your character in Human Form.

When you’re a Werewolf your character (if Male) will appear a little bit hairier on the chest, arms, and legs as well as guards of any hold will have a random chance to say “you smell like a wet dog” as a greeting to your character.

Werewolves in their Human form have a 100% resistence to diseases, including Sanguinare Vampiris (Vampirism). Werewolves also cannot get the “Well Rested” sleeping bonus nor the “Lovers Comfort” or “Father’s/Mother’s Comfort” sleeping bonuses. 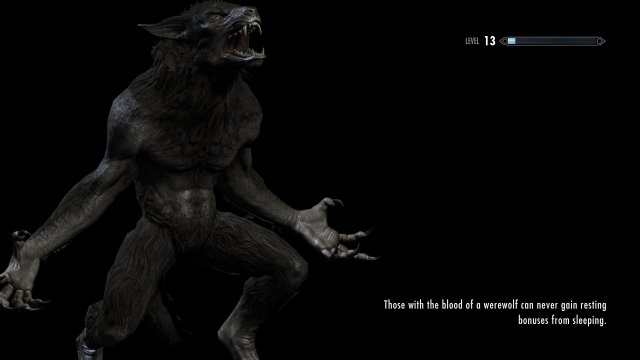 And finally in Human form werewolves gain the power of “Beast Form” in which once a day (unless you have the Ring of Hircine) you can transform into a Werewolf. Note: Transforming into a Werewolf in front of people will grant you a 1000 gold bounty even after transforming back so you must transform somewhere hidden.

The Ring of Hircine is a ring with the gift of transforming the wearer into a werewolf, under it’s cursed form it transforms even non-werewolves into werewolves.

It is aquired through the quest “i’ll Met By Moonlight”, which can be started by speaking to Sinding within the Falkreath Jail in the Falkreath Barracks. During the quest the player automatically equips the cursed ring of hircine forcing a transformation into a werewolf at any random time, completing the quest Hircine himself will lift the curse on the ring and so the ring will be normal.

This ring is unique as it can grant you an extra transformation a day (unlimited if you re-equip it).

The Skyrim Special Edition comes with the Dragonborn DLC already installed and this adds a pack of werewolves on the island of Solstheim, to non-werewolves they will tell them to go away but if the character is a werewolf they will greet you with open arms.

Powers and Abilities in Werewolf Form 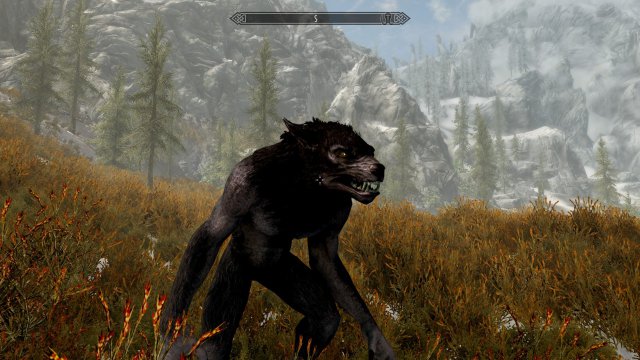 The whole part of being a Werewolf is the ability to (temporarily) transform into a humanoid wolf in which is a very powerful and strong beast that possesses supernatural strength, speed, and stamina along with their sharp claws and razor teeth.

All werewolf powers and abilities can be enhanced and improved by the Werewolf Skill Tree, which is only accessed within werewolf form.

When not in combat in Werewolf Form, the character has their health increases by 50 and their stamina by 100. Stamina regenerates at a 20% rate from the base 5% regeneration rate, carry weight is enormously largened so you can sprint across the land even if you are overencumbered.

A downside is you cannot regenerate health unless you feed on a body of a human (or animal if you have the Savage Feeding perk). 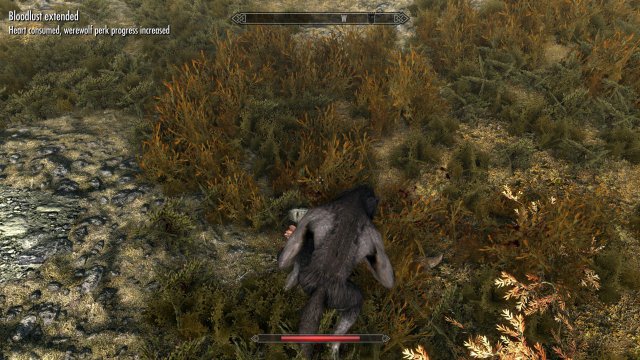 While in Werewolf Form, the character has very powerful attacks with their claws at a base 150 unarmed damage, there is a 20% of every swipe of the claw will send enemies into a ragdoll and get knocked back. A Sprint and Claw attack is an almost insta-kill dealing massive damage and knockback.

Like dual wielding the werewolf can swipe it’s left or right claw as well as do a dual attack swiping both claws to deal massive damage.

Another major feature of a Werewolf is their ability to howl in which has a supernatural effect on the world.

The default initial howling Werewolves start out with is the Howl of Terror, whenever a Werewolf howls people passive or hostile will flee from the werewolf for 60 seconds unless they are above a certain level, and nearby wolves will aid you,

After completeing the Companions Questline there is a quest given by Alea the Huntress to send to character out to retrieve three totems: Totem of Brotherhood, Totem of The Hunt, and the Totem of Terror, in which all three change the default howl to do a different effect. The Totem powers can also be upgraded in the Werewolf Skill Tree.

Majni, the leader of the Frostmoon Pack on Solstheim, can sell the character four rings that can give the character abilities in werewolf form by wearing them just before transformation.

With the Dawnguard DLC Werewolves have their own Skill Tree which is accessed by pressing the button you binded to Character Menu, then you will open up a single unique skill set which upgrades your werewolf abilities.

There are two ways to cure lycanthropy (three if on PC).

The Simplest way to cure your lycanthropy is to become a Vampire Lord, if you do not know how check out the other guide Vampirism in Skyrim.

Another way to cure your lycanthropy it is quite a tough trek. You will have needed to complete the Companions Questline so those who have not completed it come back to this after you have done.

After you completed the final quest “Glory of the Dead” of Companions Questline, and cured Kodlak of his Lycanthropy you can get another Glenmoril Witch head and put the head into the fire within Ysgramor’s Tomb and defeat the wolf spirit, then your character will be cured.

If you’re on PC you can use the Console Commands by pressing the tilde “`” key left of the number 1 on your keyboard, and entering “player.removespell 00092C48”, or “showracemenu” and cycling through the races and back to your characters original race to select, as well as the “changesex” command cures your lycanthropy.

Console commands can be used to spawn enemies, add items into your inventory, make you invincible, free camera and so on. How do I open my console? You open up […]

The Elder Scrolls V: Skyrim – How to Get the Masque of Clavicus Vile