The fine details of how the game determines the percentage chance for a shot to hit.

Disclaimer: This is a quick and dirty guide written because I couldn’t find the information elsewhere and had to go figure it out for myself. I do not 100% vouch for its accuracy.

When you fire a shot, the percentage chance to hit is determined by three things.

Let’s look at them individually.

The base chance to hit is 75%. That is, if you have a pilot with no gunnery skill firing a weapon with no bonuses at a mech with no evasion and no other modifiers, it will hit 75% of the time.

Then for the third point, which is where things start to get more complicated. All other bonuses and penalties to accuracy are combined into a single number called shot modifier, which you can see if you mouseover a weapons chance to hit when taking a shot (in the bottom-right corner of the screen). A higher shot modifier means a more difficult shot, and a resultantly bigger penalty.

Positive shot modifier (i.e. a penalty to hit) can come from enemy evasion pips (+2 per pip), firing at light mechs, firing a weapon outside of its optimal range, indirect fire for LRMs, recoil for autocannons, etc.

Negative shot modifiers (i.e. a bonus to hit) can come from weapon accuracy bonuses (all energy weapons, or weapon+ with accuracy bonus), TTS mods, arm-mounted weapons, being inspired (morale above 50%), taking a precision strike, or being at higher elevation than your opponent.

However, overall shot modifier can never be negative. Even if you have multiple bonuses and no penalties, you will still end up with a total shot modifier of 0, which means no change to the overall accuracy. 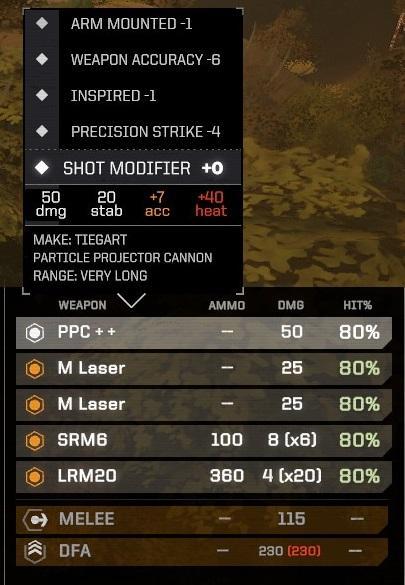 To put it another way, your maximum possible chance to hit is determined exclusively by your gunnery stat. For example, if you have a gunnery skill of 6, then you will never see an overall chance to hit that’s above 90%, no matter how many bonuses you stack. All other accuracy bonuses can be used to offset penalties but will not increase your hit chance above your max.

This is not a full tactical guide, but just a brief overview of some of the consequences of the accuracy mechanics, especially the non-intuitive ones.

All the information in this guide was gained purely by playing the game, paying attention to all the different numbers and trying to make sense of them. I haven’t actually checked the code and I absolutely don’t have access to any privileged information. I am a fallible human being capable of making mistakes, and would welcome any (polite) corrections or additions.

I have also not attempted to verify that the percentage hit chances given by the game are accurate. I am assuming that if the game says 80% then that actually means 80%. If anyone actually wants to run a statistically significant test of this then I’d love to see the results, but I’ve no interest in trying that myself.

However, one thing of note is that the game only ever reports accuracy to the nearest 5%, which makes it harder to be sure about some things. Does the gunnery skill actually add 2.5% chance to hit every level as it claims, or does it add 5% every second level? Who knows? With the game only reporting accuracy in 5% intervals, it isn’t obvious.

Finally, sometimes, the numbers just don’t make sense. I have had shots (images below) with the same mech, pilot, weapon and shot modifier on the same turn have different % chance to hit, so there is obviously something else going on inside the game, though I don’t know what. Possibly it’s a hidden range modifier? Maybe a hidden luck modifier? I don’t know. What I can say is that I have never seen the numbers deviate by more than 5% from the predicted value. 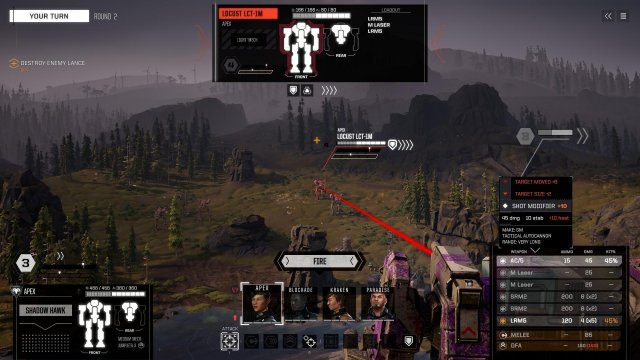 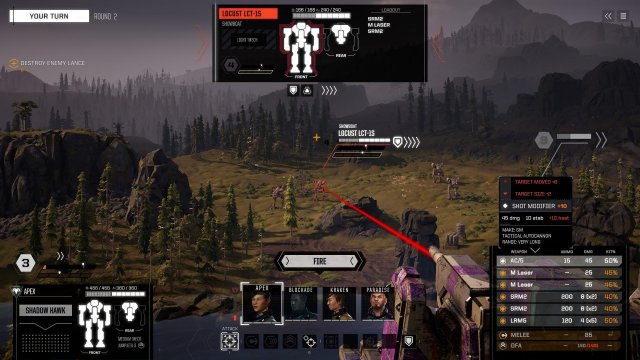 Brief guide with general advice on how to navigate the Mechbay and customize Mechs. Other BATTLETECH Guides: Beginners Guide (Combat Tactics, Pilot Skills, Contracts, The Argo). Understanding Hit Percentages and […]

This is a general guide to the amount of enemies you will face on different contracts. Other BATTLETECH Guides: A Comprehensive Guide. Mechwarrior Skills and Classes. Mech Classification. Introduction Note […]