This guide shows part of the game near the end after building a reciever and several antennas.

Spoilers ahead be warned!!!

This guide shows the near end of the game, it shows what happens when you finish building the antennas and reciever to locate a signal somewhere in the middle of nowhere. 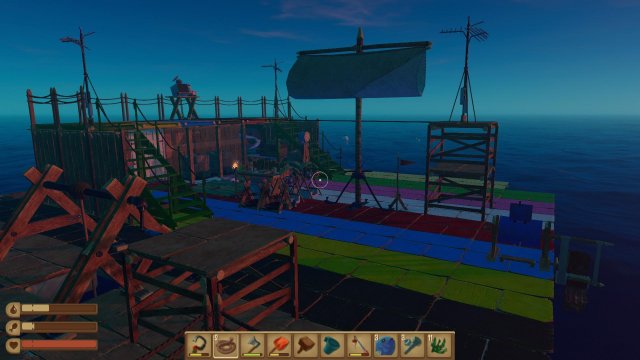 First, you will need to make your equipment. 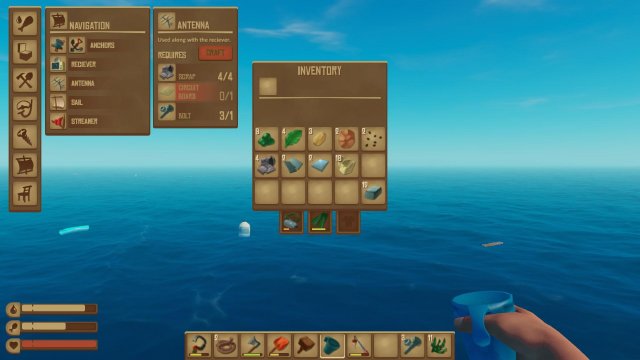 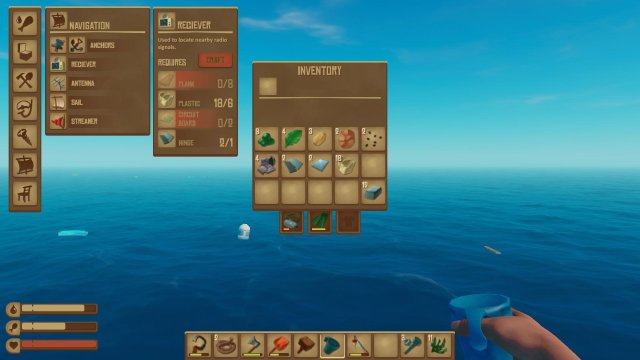 Second is the reciever, you only need 1 of these, to make one you will need: 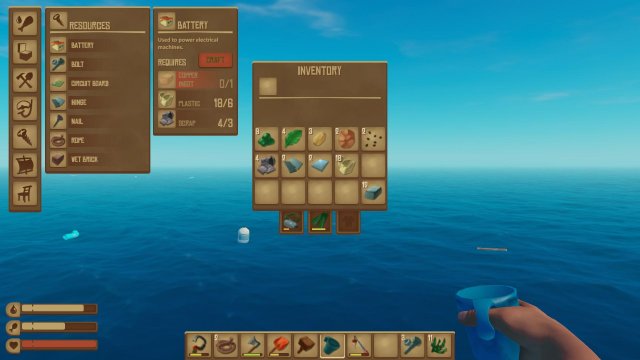 Lastly, is the Battery, you may need more than one if you leave the reciever on too long. To Craft one:

When placing the reciever and antennas, make sure that they are all on the same altitude otherwise they will not work. Any mistakes can be corrected by simply holding X on the object to pick it back up.

Here is a quick checklist to help you make them work: 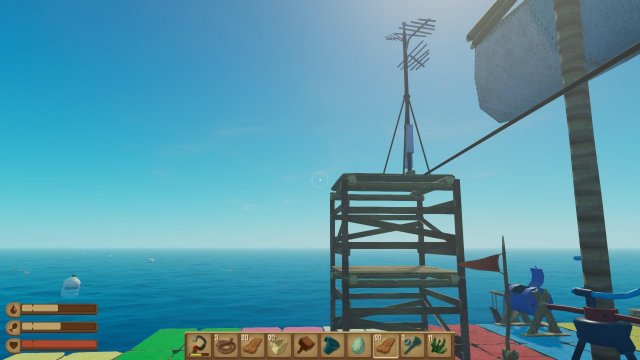 After you have successfully built your reciever and antennas, place the battery on the right side of the reciever into the slot. You can then power on the reciever. upon turning it on you will see a green dot placed around the edge of the circle, this is your goal. The middle of the sonar is you and will take into account the direction the reciever is placed. 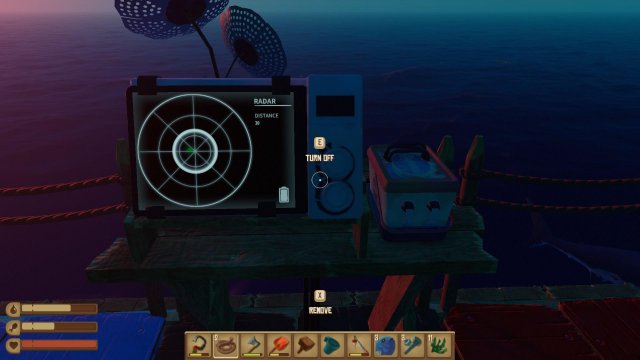 For Example: You place the reciever, power it on, and the dot is on the left side (or West) of the sonar, you can literally turn that direction, in this case 90 degrees to your left and sail directly into that direction. The distance from the object is shown in meters on the right of the sonar.

To help get there here are a few tips: 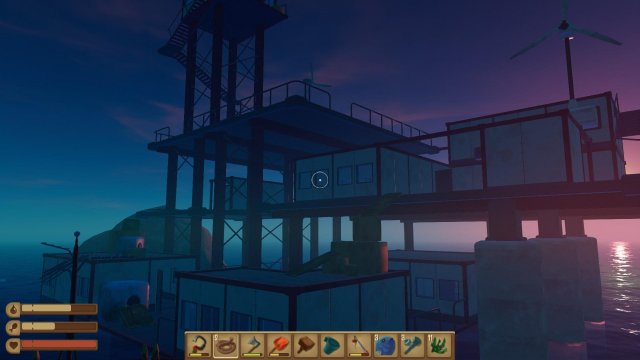 Now that you have reached your destination, you will have discovered the largest structure you have come across, The Rig.

The Rig is abandoned but still holds some supplies for you to scavenge.

Board The Rig from this entrance if possible. 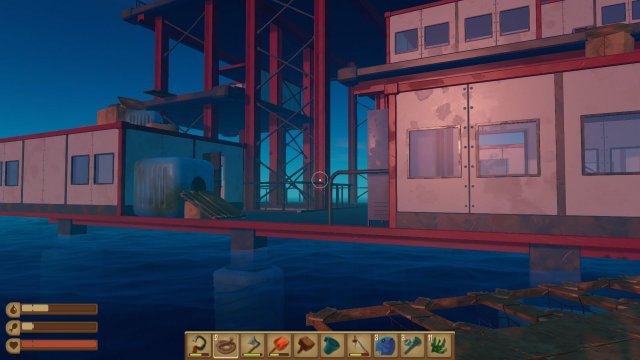 Then follow these screenshots to get to the top. 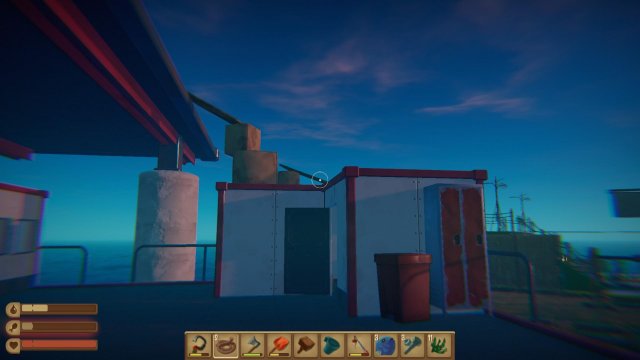 Jump up the red barrel, then the lockers then up to upper level. 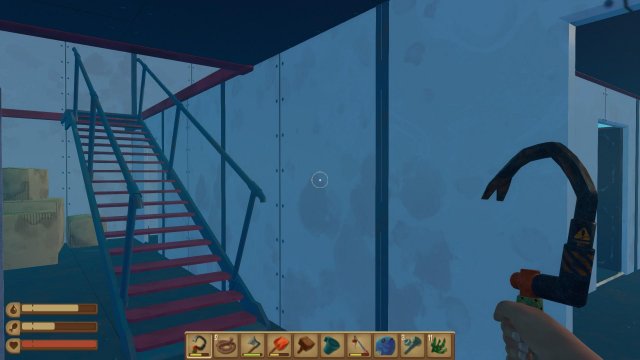 Once on the upper level head into the building and find these stairs up to the roof. 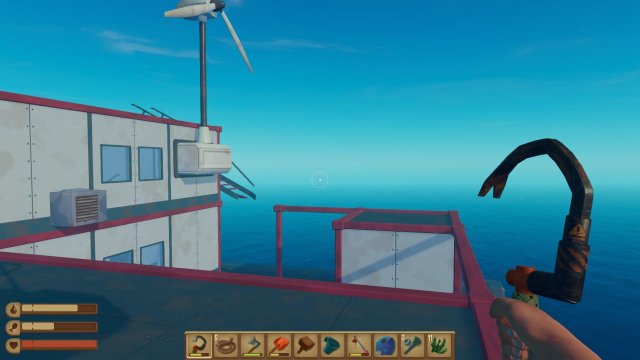 When on the roof go across the red beam on the right and the jump over to the broken metal catwalk along the side of the building. 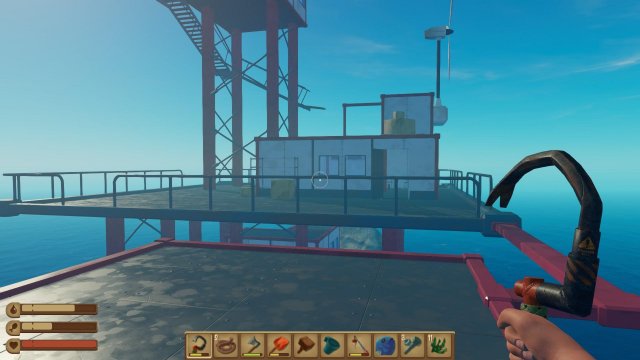 Then walk along another red beam then onto the boxes on the left side of the door into the building. 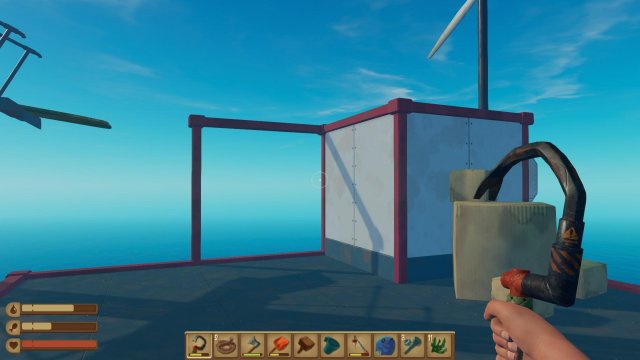 You can then jump up the boxes onto the small roof and then across to the towers catwalk. 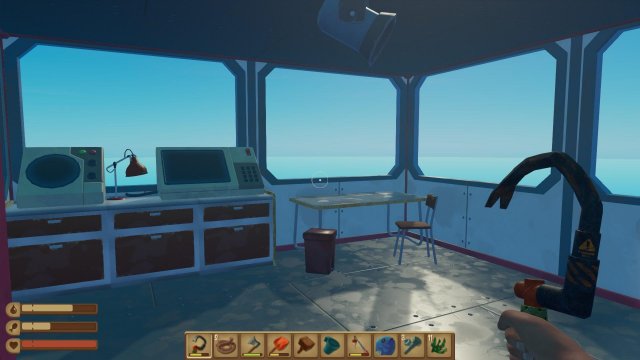 After heading to the top of the catwalk you will find the inside of the tower.

There isnt much in the tower apart from a crate on the floor and a map. 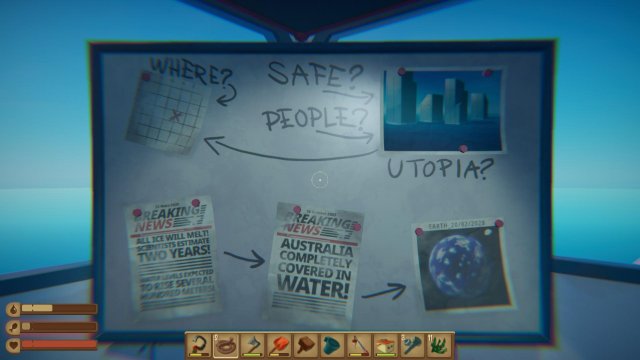 This map shows some of the games lore, there a couple newspaper clippings that tell about the rest of the world. One newspaper says that Australia is “completely covered in water” and the other states that “All ice will melt” hinting that the cause of all of the water is from global warming.

Next to the Newspaper is a picture of the globe where you can see that the world is covered by water and hardly any land is visible.

Lets get on to the most interesting part of the board, the so called “Utopia” there is a picture on the upper right that shows what looks to be buildings in the water that resemble skyscrapers. whoever has left this board must have gone out to find this place in hopes of better survival, there is a mapped grid on the left of that shows that it is located at H? numbers are not visible on the Y axis of the map but we do know that it is located in section H on the X axis.

How to access the island tiers with as little building as possible. Other Raft Guides: Beginners Guide. Survival Tips. End Game (Spoiler). How to Get Sand and Clay. ContentsGeneral InfoGetting […]

Raft – Useful Tips Before You Start

Some observations I made while playing that I wish I’d known from the start. Things I Wish I Knew Before Starting Hello, and welcome to Raft! If you’re reading this, […]