Follow me leveling through the game from 1 to 13 and learn how to level fast and effectively while still trying several areas, different fish and types of angling. How to catch the biggest fish early to mid game and how to distribute skillpoints to maximize your leveling speed.
You will also pick up some very useful tips and tricks from the guide – especially if you’re new to the game.

This guide is about how to level from 1 to 13 in an effective manner, while fishing varied and in different areas. It contains quite a few tips and tricks, I have picked up or learned from others while playing through this game with several characters in both difficulties. The videos are uncut and unedited – you get to follow me every second of the way; when I catch fish and when I don’t. It is divided into 8 episodes of different length, but I have tried to keep every episode limited to at most 1 hour. It is mainly useful for beginners, especially the first 2 episodes, but I expect there to be at least a few tips and tricks, that can be useful for even experienced players.

The videos are uploaded in 720p due to my rather slow upload speed. I can upload them in 1920p, but at most one per day and preferable by night – should someone request it, I will of course do so.

I have strived to make the guide equally useful for players both in normal difficulty and in real difficulty – in fact some tips apply only to one difficulty or the other; as a consequence I have put very little emphasis on the skill Hunter Vision. The guide also dosen’t contain anything about fly or ice fishing. I really don’t do either on my primary accounts, and I wouldn’t have much advice to offer.

If the guide becomes well visited, I could possibly add more episodes, but I feel that once a character reaches 13 and has plenty of funds, the game is pretty much just about getting bigger and bigger fish. Personally, like in most games, I prefer the initial parts of a leveling game; looking for better gear and struggling to ‘kill the monsters’. Once the gear is in place and the game becomes a grind, I tend to loose interest and start a new character.

I hope you like the guide and find it at least somewhat useful – it didn’t take long to play the character to 13, but it took quite a while to add subtitles and upload the videos. All the leveling was done in local games to make the videos less cluttered by information – see the note about local vs. multiplayer below.

Nothing is shared in a multiplayer area. The fish you see and catch aren’t the same as other players see and catch – they spawn on your end, so to speak. Furthermore you don’t even have the same time of day or weather as the others. You don’t get more or less experience or money for any particular fish than you would in a local game.

Multiplayer areas simply allow you to interact with others in chat and to share your catches in a textual form. You can even stand on the same spot as someone else and not interfere at all.

People are usually very friendly and helpful in multiplayer games, and I highly recommend using them. Given the increasing popularity of UFS, they may become crowded though at some point.

Episode 2: Introduction of the Strawberry Bomb

Note on the Spawning of Fish:

Fish spawn continuously – if a certain lake has 10 pike, regardless of how many you catch, there will always be 10 pike in the lake. Moreover if you catch and release one, it will spawn at a different size. This is easily verified by simply creating an area with a small pond and a single fish.

The size of the fish that spawn seems to be determined only by the level of a player. For example say a player is level 10, say he/she visits a lake that holds pike and say that pike spawn in sizes {1, 2, 3, …, 10} kg each size equally likely given the level of the player. If said player uses a hook-size that only allows him to catch pike of size 8 kg or above, he will quickly run out of available targets in the lake, and be forced to either reload the area or aim for smaller targets (Only 30% of the fish are initially able to take his/her hook, and for every one he/she catches the number will drop until there are no fish left able to take the hook). Even if said player releases fish he/she would like to catch again, he/she will run out of targets. Because of this, you may find, at lower levels especially, that you simply run out of big fish in a given area.

If you find yourself in a multiplayer area with another more experienced player, you may find that he/she catches a lot of very big fish. But whatever you try, you cannot catch fish that big. This is simply because fish of that size may not be available to you at your level; at least not in the same amount. You could even be using the very same gear and techniques and still get very different results. It doesn’t mean that he/she is very skilled whereas you are not; it is simply how UFS functions. You can always choose a local game, if such things might frustrate you.

Episode 3: Chasing Striped Bass and Catfish – Rounding off with a Few Trout

Episodes 6 and 7: Return to Betty Lake and Return of the Strawberry Bomb

Episode 8a + 8b: A little bit of everything

There is nothing to learn from this episode. You can laugh at my incompetence – especially in 8b, but learn something – doubtful.

It took roughly 7 hours to level from 1 to 13 while playing varied. It could have been done quicker, but I feel like watching me grind would be very boring indeed. And I had loads of fun doing it.

And what then do you do after 13, you may ask me. Well – to be absolutely frank, gaining levels after 13 is a grind. There is no point in denying it. You can try various types of angling – like ice or fly fishing. You can try to assemble all species you are able to catch. But at some point you will need to grind to get to the higher levels.

There are ways to catch Marlin even as early as 14, but none that I will use. I encourage you to check them out though – they may be for you. Having just reached 19 on the character, I play most, I have tried catching Marlin by now – and I can tell you: it’s well worth the time you spend grinding. 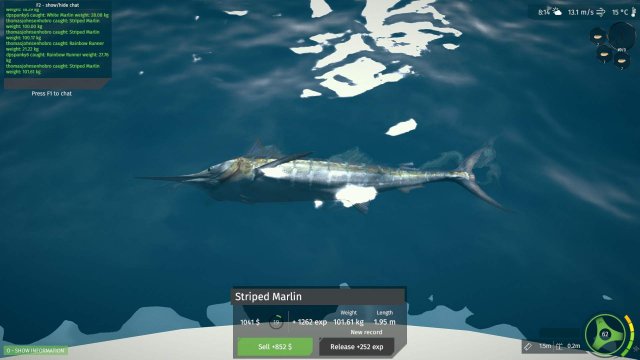 But how then do I grind, you may ask. Well as I see it, there are 4 potential things to do:

I suppose you could target big Striped Bass, which are very easy to catch and land. Big fish aren’t that common though. Sometimes I go to Powell Lake and catch 120 kg fish in 10 mins – and sometimes it’s 20 kg in 10 minutes.

If you go for Mirror Carp, you could try using a stand and 3 rods with electronic bite indicators. Once you get used to all the keys used, you can set one up in 30 secs or so, and you will catch quite a bit more. With this strategy, I recommend a #6/0 hook instead of a #7/0 – there simply aren’t enough of the very large Mirror Carp to catch. Use corn if you also wan’t to catch Grass Carp. You can also rig one or more rods for pike with cutbait or catfish witk marshmallow., if you so choose. This is slighly faster than just one rod with #7/0 and respawning, but you aren’t able to do other things while fishing (too much action).

If I should rate them, I would probably say that 2 is fastest followed closely by 1 and then by 3 and 4. The most fun is probably 1 or 4 and the most action packed probably 4 or 1. The thing is that, as far as I can tell from the numbers I have been crunching, in UFS a 20 kg fish pays x money and y experience regardless of difficulty or place it was caught (or at least either has a very very small impact). A record fish doesn’t appears to pay extra either. Possibly a fish, that unlocks an achievement does – I haven’t checked that yet.

Before you begin grinding be warned – I will estimate, that it took me somewhere around 8-9 hours to level from 18 to 19 on Mirror Carp alone. That seems like a long time, but considering you can do other things, while you play, and comparing it to the grind of other games, I don’t find it overwhelming in any way.

This guide will take you through the steps to catch fish on the starter lake using lures. Fishing the Starter Lake with Lures Guide This guide is for New players […]

Here I will show how to catch chanel catfish. Catching Catfish Catching catfsih isn’t easy but after reading this and watching film you will catch him immediately. Catfishes are swimming […]