This guide explains how to level up Bounty Hunter role without doing too much. It will also save you time in the long run.

You do not need Reinforced Lasso for Legendary Bounties as they do not break out and escape like normal bounties.

To really start getting major EXP gains and money you need to complete a Legendary Bounty until it becomes a 5 star bounty. That is just how the payout scaling in the game works. Any base Legendary Bounty EXP is 1000 but with a 5 star bounty it gets multiplied by 1.5 making it a total of 1500 EXP. It does not matter the amount of targets a Legendary Bounty has. The EXP is always the same. Money varies per bounty, but it is not based on the amount of targets as well. So it is better to take bounties with a single target to make it easier on yourself. The more targets you have the harder it is to bring ’em in and the chances of killing them are higher. Most level 5 bounties require them to be captured alive.

Before you start the mission equip any damage boost/recovery cards or healing cards (healing cards can be very useful during PVE fights like these as enemies have good aim and hit rough). Don’t forget to bring a few healing tonics just in case. This is also a good opportunity to level up your ability cards with mission and kill exp. 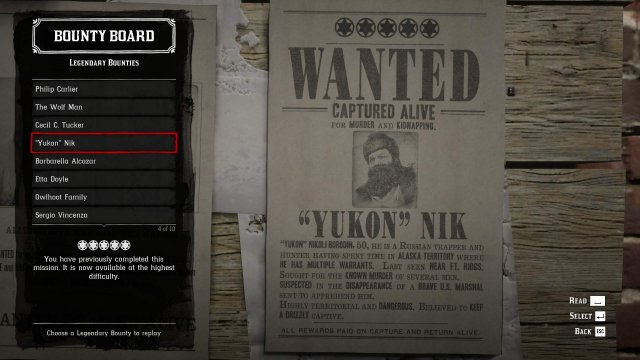 This mission is my favorite because it is the easiest to play and it is the best for EXP because it has a lot of goons to kill but they are not too hard compared to other missions and the map layout helps you combat them, and they got nice loot.

So you want to do this bounty mission every time it cools down after 48 minutes of you having completed it. You should start a timer of 30 minutes from the start of the mission to know when to turn it in for maximum gold and cash rewards. Because if you want to get full 1500 EXP you need to wait 30 minutes for any in game mission, including Legendary Bounties. You will also get 187.5 dollars for Yukon and 0.4 gold bars if you spend 30 minutes in this bounty.

First, go on the cliff overlooking the Yukon’s fort and hide behind this tree. It is the largest tree up there, perfect elevation to snipe everyone down. The cliff is on the way towards Great Plains. 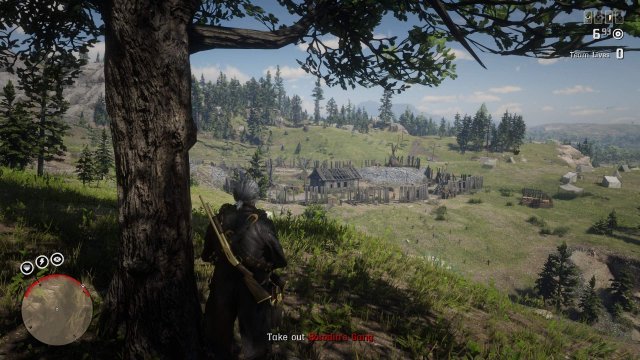 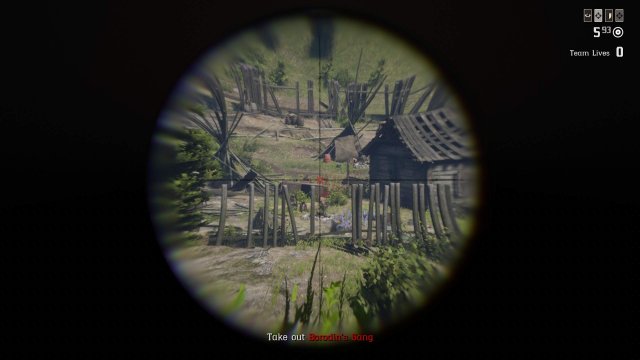 After most enemies are down, make your way to the fort and kill remaining enemies, beware of dogs in front of the shack. Do not let bears out of the cages yet or “You’re tearing me apart, Lisa” is bound to happen. 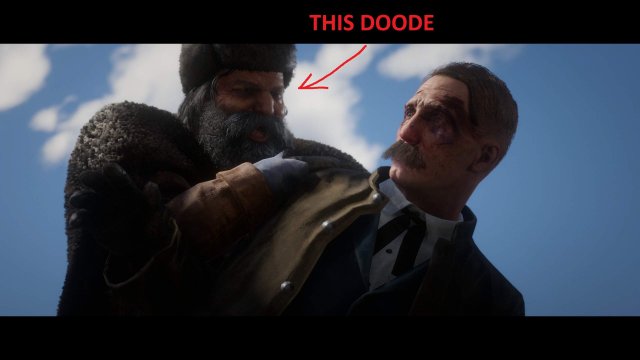 Once all enemies are down a cutscene will play and Nik will come out of his hut with a hostage. You gotta shoot Nik several times in the sawed off shotgun. If you hit the hostage, do not worry, who cares if he lives. Anyway, shoot him around 3 times with a navy revolver in the sawed off and he will drop his gun and lie wounded on the ground. Tie him up and bring him inside the shack. If you can’t wound him and end up killing Nik instead just use lasso to tie him up, either tackle with it or throw, but be quick or he will kill you with shotgun. 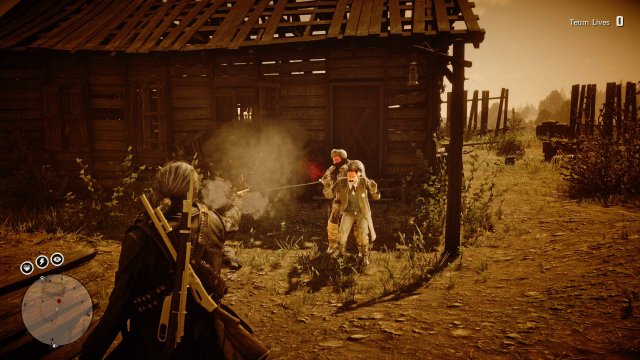 There is a total of 3 waves of goons during this mission. You’ve already cleared 1 wave. The 2nd wave will arrive soon after you tie Nik up. I like to put him in the hut so I do not accidentally target him with right click like you would target a horse for interaction sometimes, during a firefight, which is very annoying.

So you gotta do everything fairly quick, not to be ambushed by those guys.

Anyway, hide in the shack, it will be your outpost of defense against 2 final waves of poachers. Go in 1st person mode as it is easier to shoot in that mode when you are in confined spaces. You can use both shotgun and sniper rifle from inside the shack. It is a perfect defense spot. It has 2 doorways and doors close. When doors are closed enemies usually do not attack you or even come inside. So try having only 1 door open at a time. You can shoot through windows, and holes in the shack, enemies won’t usually do that or will miss horribly. Proceed to clear the enemies. If the fight is too hard you can let the bears out by shooting the locks on the cages. They will help you kill the enemies and run off or die in the process. Bears won’t enter the shack so you will be safe in there and you can even kill the bears from inside the shack. Bears will steal your non-role related combat EXP. 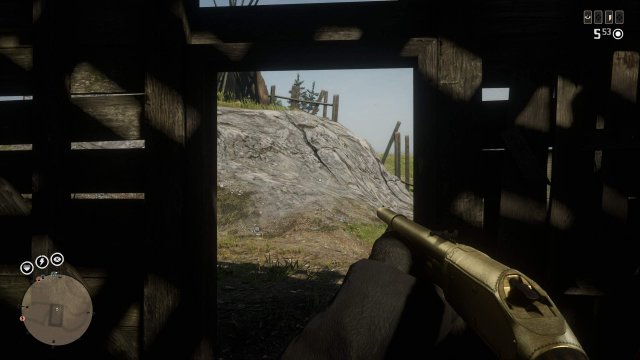 Once you’ve dealt with this 2nd wave of enemies you probably think you are safe. Well you’re not. Leave Nik inside the shack and venture outside the red borders I’ve shown on the pic below. And run back to the shack very very fast as more enemies will come to fight you in the same fashion as during wave 2. Wave 3 is likely to catch people leaving with Nik off guard on their horse in a field without the protection of the shack. 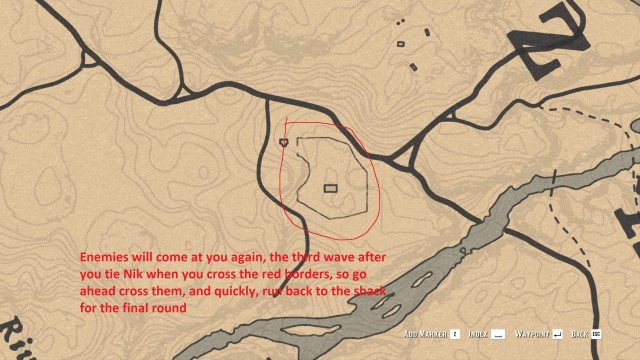 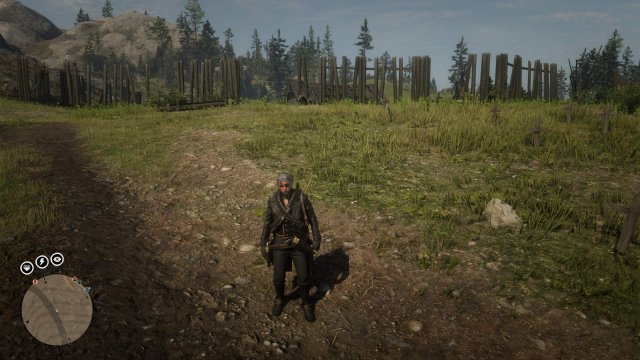 Picture with me standing shows approximately how far you have to go before turning back, and running as fast as you can inside the shack. Do not waste time, once you reach the red border the enemies are already coming for you with aimbot aim and numbers. That is especially deadly on final difficulties. But this bounty is still the easiest and best to play.

They do not immediately show up so that may deceive you into thinking you did not go far enough but I suggest you venture out and run back inside. Overtime you will get an idea of how far you have to go before returning to the shack.

Once all enemies are dead and looted, pick up Nik and go to Great Plains, there I suggest you hunt animals for EXP and Meat, especially good if you find an entire herd of Bison which I find there very often. By the way, legendary missions are always in a complete solo session so animal spawns are always good. Your aim is to make sure you spend a total of 30 minutes in the mission from the start to get maximum rewards and then turn in the bounty in Blackwater.

Once bounty is turned in there is 48 minutes cooldown so feel free to just forget about leveling Bounty Hunter role for 48 minutes and do something else as the EXP you get for regular, even 3 star bounty missions is small and not worth waiting 30 minutes for, to get the full reward. More so, most regular bounties start count down when you approach the target and only last for 15-18 minutes, sometimes even less, like 7 so they do not allow you to collect bonus for full 30 minutes.

Once you’ve done this bounty several times you will understand that it is very easy. It will become muscle memory for you when you complete it and it won’t be a challenge.

This guide describes steps required to play in free aim lobbies. Making Your Game Free Aim There are different type of lobbies in RDO: Aim assist lobbies (normal and narrow).In […]