A detailed list explaining the roles, cards and playstyles of Buck.

Buck is a high-health flank champion that utilizes his leaps to initiate or retreat from fights. He wields a Shotgun that deals up to 570 damage on a full meatshot, a recovery tool and a netshot used to engage and slow targets for easy shots. His ultimate, Buck Wild, resets all of his cooldowns and doubles his inhand damage for 6 seconds, giving him a massive advantage in 1v1s with squishy targets.

Buck should be used to single out a solo target, like a squishy champion or a damaged tank. To successfully engage an enemy, here are the steps you should take to ensure you deal maximum damage:

For Buck’s ultimate, you should follow the same steps. Make sure that you have full health before you start to engage because Buck Wild does not give you any crowd control or damage reduction while in use. It is okay to burn out your abilities before the fight; you will regain your cooldowns immediately upon activation.

Pros and Cons to Buck

Ensnare is Buck’s default legendary. Ensnare increases your shotgun’s damage significantly when landing a netshot on a target, dealing 60% bonus damage while the target is slowed. Meatshots will go up from 570 damage at most to over 900 (not counting headshots), letting you two/three shot most targets depending on how many points you put into the Tangled card (3 points gives you enough time to shoot three times while the target is entangled); It is also worth equipping the Concussion card and putting in atleast 2 points so you can have netshots available every 10 seconds instead of the standard 12.

When running the Ensnare card, it’s best to rush Cauterize first to ensure that your targets cannot outheal your massive burst damage. After you’ve built up atleast two levels of Cauterize, I would recommend going for Kill-to-Heal next.

Ensnare in conclusion is a very solid choice and can output massive damage assuming you can land your nets and have a build to accommodate this playstyle. 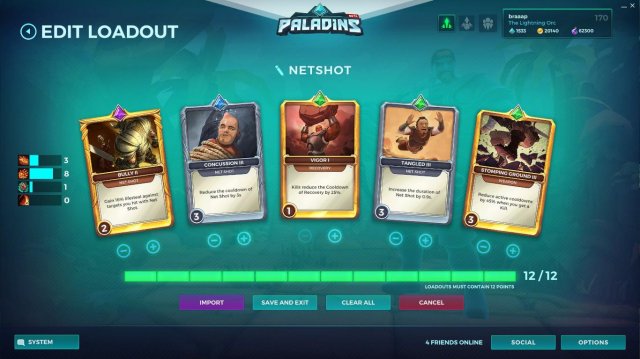 Bulk Up gives a good health burst to your recovery option as well as granting an additional 15% bonus damage while active. Having a lifesteal/recovery oriented build will give you rapid sustain that can reliably be used up until Cauterize III. Bulk Up is also the perfect option for when your team lacks a support (or atleast a support that can reliably heal you from afar).

It is best to stack Life Rip first when using this card for the most sustain possible. Note that this card is still affected by Cauterize, lowering your burst health aswell if you are affected before activating recovery.

The way this card works is rather counterproductive late game; as soon as the enemy reaches Caut II or III, the burst healing is nullified and so is your damage boost if the enemy decides to invest in Haven. When you do use it to engage in a fight, you won’t have the valuable burst heal to use later when you’re out of combat to quickly re-engage the enemy, making this legendary worthless as a result. If you’re looking for a good damage boost, run the Ensnare card instead. 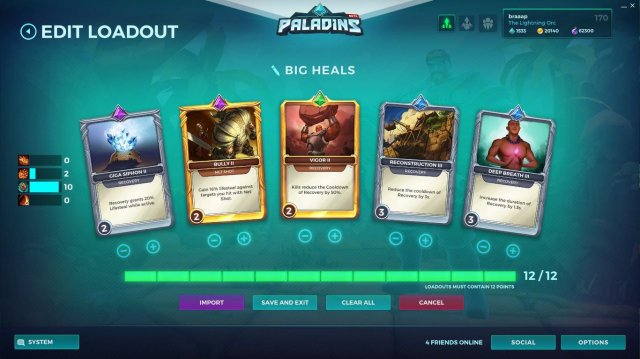 Bounce House is a legendary card that turns your leap into a disorienting weapon, as well as a great initiating/finishing move. Utilizing the knock-up aspect of this card, you can push enemies into environmental hazards or set them up for an easy shot with your inhand damage. Not much else can be said about this card other than that it gives Buck another reliable damage option.

I would recommend stacking Cauterize with this card, even though your leap won’t apply the reduced healing. Cauterize will prevent the enemy from healing up mid-fight, letting you get in decent damage before ending your opponents with a swift stomp.

Bounce House, along with Ensnare are both solid options, both dealing good damage to compliment your Shotgun’s rather low DPS. The difference between these cards is that Bounce House is a more readily available, constant source of damage while Ensnare is a massive burst damage boost for a short duration. Either card is a viable option, and should be equipped based on your playstyle. 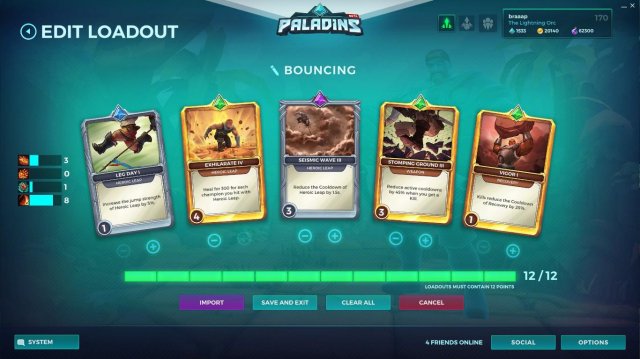 Where Buck Stands as of Now, Conclusion

After the hyper-mobility legendary nerfs some patches back, Buck is one of the few remaining viable flanks left in the game with his strong, low cooldown leaps.

The biggest problem facing Buck is like his flank counterparts, his hyper-mobility card Bounce House was nerfed to where it is now. The current Bounce House, while still a good option, still doesn’t compare to having two jump charges.

Overall, Buck is a solid pick that can deal reliable damage while packing reliable mobility. His low DPS Shotgun can be alleviated through his abilities and legendary cards/builds, and he’s got some good 1v1 game with other flanks and damage champions. Not much needs to be changed about Buck now other than buffing his Bulk Up legendary properly (perhaps slightly reducing Cauterize while active).

Paladins – Who is the Best Tank (Top 7 Tanks)

This guide is a brief summary about the top tanks in the Steel Forged patch of Paladins. Other Paladins Guides: Buck Guide. Lian Guide. Cassie Guide. The Drafting Guide. Five […]

Paladins – Evie Character Guide (How to Play and Defeat)

In this guide I will show you how to play and defeat Evie. This guide is made out of my preference and experience that helped me win, it is entirely […]

This is a brief drafting guide based on the last open beta patch Paladins has had: OB70! Other Paladins Guides: Buck Guide. Lian Guide. Cassie Guide. Who is the Best […]