Introduction: (What makes Cassie special, who are her main targets?)

Cassie, the infamous damage champion, able to seemingly delete her targets within a blink of an eye.

Cassie is a damage champion, she has a slightly below average healthpool of 2300, armed with a crossbow. All shots fired are projectiles, meaning it takes time to travel in the air. Compared to, for example Drogoz, Cassie’s shots will travel much faster, but it’s something to keep in mind and can take some getting used to. An important thing to note is unlike other projectiles such as Maeve’s knifes, there is no falling curve. In addition, there is no damage falloff, meaning Cassie will do just as much damage from halfway across the map as in someones face.

Ability Overview: (A run through of Cassie’s abilities, when to use them, and how to maximize their impact.)

Your crossbow shoots an arrow that deals 680 damage, with a 0.75 second firing speed.
Everytime you land a shot, you gain 4.2% ultimate charge and with a fast projectile speed, this is an easy shot.

Blast Shot shoots an arrow that explodes on impact dealing a 450 damage AOE attack and does reduced damage to those nearby. This results in gaining 3% ultimate charge on hit and anywhere from 0.5% to 2% for anyone else hit.

Rolls 50 units in the direction of movement. You can still be hit while rolling.

Send your bird into the sky for 8 seconds. This will reveal enemies to allies, yourself and grants CC immunity and 30% Movement Speed. Keep in mind that this ultimate will be cancelled if Cassie dies, and that the reveal has a global range. (You will not be able to gain ultimate charge for the duration.)

Exaction allows you to deal 30% bonus damage for your next shot after using Dodge Roll. This used to be the primary cassie talent that everyone used but has since fallen astray. This is a great talent for Cassies who favour mobility and close ranged combat, a good pick when going up against a multitude of flanks, or on small maps.

Just Breathe takes no damage falloff one step further. All Crossbow Shots deal upto 30% increased damage once they’ve traveled 70 feet. This allows cassie to play further back and is an excellent counter to an opposing Kinessa or Strix. This is a good pick on maps with long tunnels like Stone Keep, Timber Mill, Splitstone Quarry.

For many the current Meta loadout, Impulse adds buffs to your Blast Shot. Increases the damage of Blast Shot from 450 to 700, as well as reducing the cooldown by 2 seconds. Paired with a loadout, this Talent allows a Cassie to melt through lower health champions, as well as output high damage onto clumped up enemies on point.

After hitting an enemy with disengage, subsequent shots will deal an additional 10% of their maximum health in damage for 6 seconds, affecting your main attack. Big Game can be a great pick when going up against teams with bulky double frontlines (Eg. Inara and Makoa), and can dish out insane damage. It should be noted that without loadout modification, the cooldown for Disengage can be long (12 seconds). This talent can also be paired with a max KB loadout on maps with Environmental Hazards, such as Fish Market. 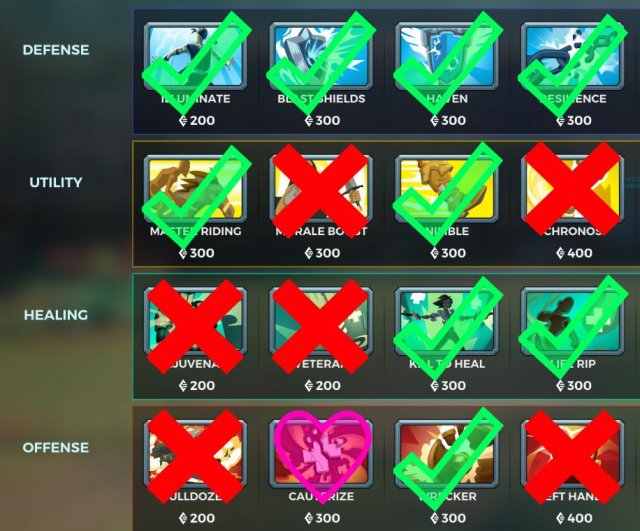 Kinetics and Blast Shower are essential; however the other three cards and their levels are of course up to you. Drain Life can be effective, however Cauterize diminishes its bonuses. Somersault is an extremely effective escape mechanism. Quiver is somewhat a bad habit for me, I can’t really play without the added ammo, however if you can avoid this, it might be an idea to swap it for something more useful.

Although I don’t frequent Dodge Roll Cassie, and it has been nerfed massively, I would recommend using this loadout on close quarter maps, such as Brightmarsh (mostly).

This loadout isn’t entirely serious, it’s a lot of fun to use. I wouldn’t recommend it in Ranked, however in Casual on maps such as Fish Market or any others with a multitude of environmental hazards, it can work. Again, you can exchange cards such as Blast Shower for Megaton (Increases Blast Shot KB), however this can be inconvenient. Removing Raze can make this an effective loadout paired with the Big Game talent for any map.

Hints and Tips: (Tips on how to use Cassie, special circumstances, etc.)

Cassie’s ultimate: Scout, can be a great way to escape from a high knockback attack or any CC, such as a Torvald ultimate (not that his ultimate isn’t already negated by 100 things), or even something such as a Seris ultimate. It’s important to keep in mind that this might not be the best usage, as using ultimates to save only you can let the team down. The ultimate also offers a direct counter to Maeve’s ultimate: Midnight. Your allies will still be able to see the locations of enemies, negating the main effects of Midnight (Still got to watch out for walking off the map on Fish Market!)

Remember, when using a Blast Shot loadout to maximise the amount of people you hit at once; this will mean your cooldown is reduced, as well as giving you a burst of healing. You can fire a blast shot almost simultaneously with a normal shot to deal 1350 damage within milliseconds.

Ranked: (Cassie in ranked, when she is banned, who she might counter.)

As of OB69, Cassie is regularly banned and considered a High Tier Damage Champion. If you can pick her up, it is highly recommended, just remember to keep the map in mind and what your opponents have drafted so far.

In this guide I am going to show you some tips & tricks on how to become a better flanker. Other Paladins Guides: Buck Guide. Lian Guide. Cassie Guide. The […]

Paladins – Viktor Character Guide (How to Play and Defeat)

In this guide I will show you how I play and defeat Viktor. Whether you wish to follow this guide or not is up to you as I am just […]