Electricity, Wiring, Generators and Traps, I’ll make sure that all of this is covered.

What you need to start using Electricity.

Q: Waaah!! Why can’t I connect this wires waaaah!!!

All object are only allowed to recieve one IN connection, while some are allowed to give as many OUT connenction as they want to such as relays, this pic will explain it. 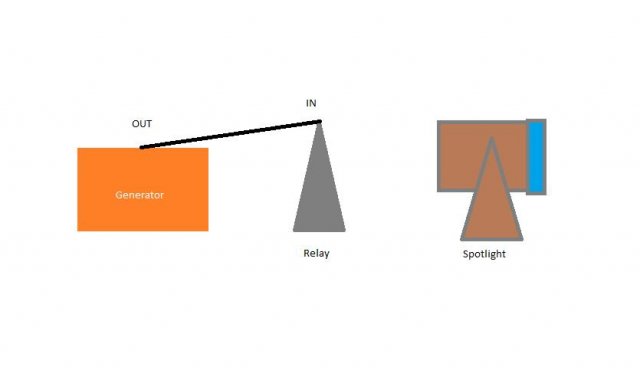 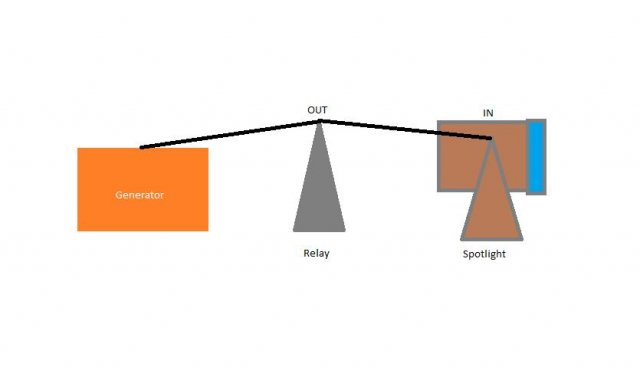 Incase you got confused from previous question and haven’t read this guide, well don’t bother looking, the Generator is all that you need, batteries are optional!

Battery Bank’s recipe can only be brought from traders, and it’s not scavengeable at all, and it’s chance of even appearing in the trader’s inventory is really really frickin low. so If you really want that schematic, then you better start visiting them every week until one of them start selling the schematics.

Battery Banks are used to store energies generated by the solar bank to be used during the night, in which the solar bank is un-craftable and require you to buy it from traders at a very expensive cost.

Now if you’re to stingy to buy the electrical objects from the trader (which they sell plenty of), you might want to craft them yourself (which require you to invest lot of skill point). The only skill worth investing in is ranged traps and melee traps (other stuff unlocked by those are buyable at a rather fair price).

Now to the easy part, if you did not brought the DIY perk, you now feel confused and thinking of how to get the components required, well don’t worry, I’ll list all of them and where to get them.

Note that you’ll have to use wrench, otherwise you’ll get only scrap iron.

Q: Is using electricity worth it?

Hell yeah it is, no risk, no effects on heatmap, and makes your defenses better in many ways.

Now the thing about relays is that they only take one IN, but give as many OUT as they wishes to (jk they do have limit, but you’re not likely to reach those less you done it purposefully), It’s main uses are just to simply exend the reach of your cables.

When you begin starting to have tons of wire hanging around and that it looks annoying, you better start exending them in several different way like, to build pylons and pretend that it’s a power line, or sort the ceiling lamps by placing the extra relays on your roof. There are many ways to hide your cable, but it’s purely aesthetic and would actually burden you with more power consumption from additional relays.

Here’s something you want to know about Speaker.
Does it attract zombies?
Nah.

Camera controls can only be done by spotlight and turrets, they can only be aimed when powered, and the secret thing about the cam control is that it doesnt really affect your turret’s aiming degree, but it will allow you to use your turrets manually like some kind of machine gun on a tripod.

How? Learn it’s perk from sceience skill.
Where? Get it’s engines from disassembling cars that lays around the road.
Why? It uses gas that regenerates from gas station’s pum, and work 24/7 which is good for starter bases.

How? Learn it’s perk from book brought at traders.
Where? Same with Gen-bank, you can get car batteries from disassembling cars.
Why? Bat-bank let’s you connect multiple generators as a mediator to increase the alloted power output of a wire network, also works well with sol-bank.

How? Buy em from traders.
Where? Solar Cells are also brought from traders.
Why? It works daily, as long as it’s not roofed, doesn’t consume gas, and less requirement to maintain it.

Well, it’s a switch, kinda like work relays, let’s you manage whether you want let power to flow to a network manually, such is deactivating traps when you’re repairing you base.

This special relay allow you to manually set time on when power will flow to a network, thus activating it. Best be used to save power on light if your base has windows.

Mostly used to activate dart traps and alarm, difference is how you want to camoflage them, tripwire are invisible and can be hidden behind a door.

Those two are a bad pair with any traps other than dart trap, trust me.

Basically and advanced trigger that look for selected targer (which happen to be chosable) between you, friends, stranger, and Zombies, and you can pick more than one.

Take and Gives only one IN and OUT, you can link in as many fence post as you want and complete a circle by forming the last post adjacent but opposide to each other.

It is much more preferable to separate the electiric lines if possible due to them breaking easily by police zombies, or any other disgruntled zombies.

Dig their base one block lower, and you’ll have it hit even crawlers too, but leave thems standing flat and you can crouch below them to navigate around.

More DPS than turrets, ammos are cheap, but it can aim for♥♥♥♥♥♥ so you’ll have to position it to where it’ll score a headshot, wich instant kill common zombies, or two hit the toughther one.

Same abilites as motion sensor, your camera direction given to it won’t have any effect, and it’ll have it’s maximum shooting radials, it also somehow stealthy, and will never raise your heatmap.

Smg turret will attemp to shoot at a small accurate burst and will always go for headshot, while Shotgun turret will drain off it’s buckshot to deal maximum damage to nearest zombie.

Leave some of them inside your house on stranger targeting during pvp, since it’s the second best anti player weaponry, only to be beated by candy tin lanmines hidden in grasses.

7 Days to Die – How to Make Zombie Corpses Stay Longer

This is a simple guide, how to edit a XML file, to stay zombie ragdoll longer. Guide to Make Zombie Corpses Stay Longer Finding the Right XML File to Edit […]

7 Days to Die – How to Survive Your First Horde

A detailed and comprehensive breakdown of each perk available, what it does, what it unlocks and how to attain it. ContentsGuide to PerksIntroductionAttributesRequirementsPerception AttributeStrength AttributeFortitude AttributeAgility AttributeIntellect Attribute Guide to […]