Evil Urn: You will encounter Evil Urns in many ACT V locations. If you click on them, elite pack will be spawned nearby. The type of monsters is always picked from the current pool of monsters for that location. Elite packs are good opportunity for experience and loot, but some elite packs can be very dangerous. Many ACT V location have Blood Lords and they are very dangerous monsters. So if you click on Evil urn be ready to fight immediately as elite pack can basicly drop on your position or very close to it. 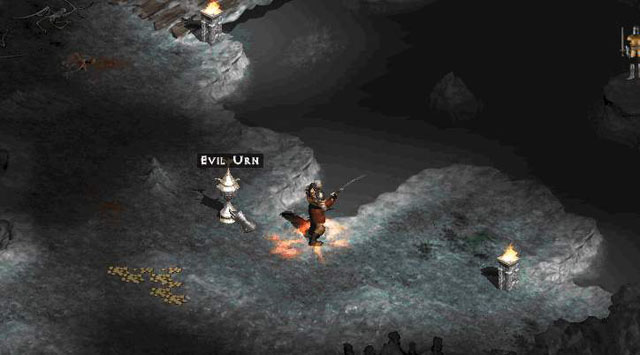 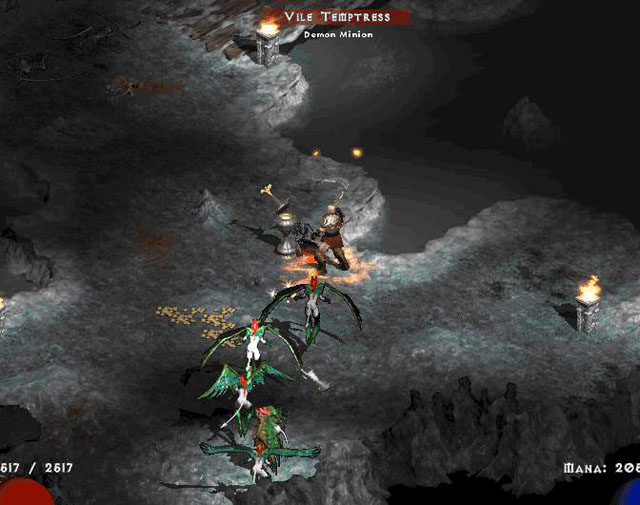 Death maulers: They can deal high unexpected damage. They can fight at melee range but they also have range attack. Its harder to notice as it is underground attack and not classic projectile. The key is to keep moving because they will hit you with range attack only if you stay in same place for a moment. 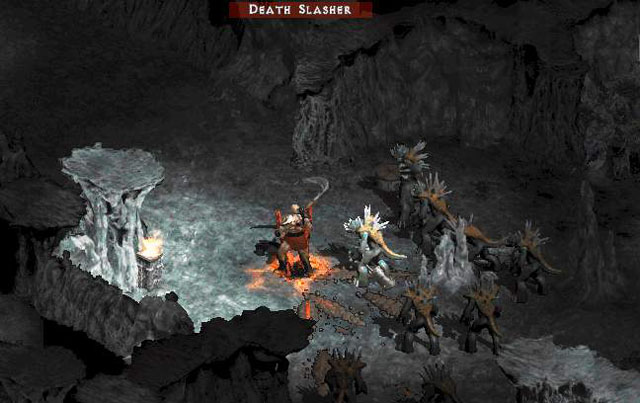 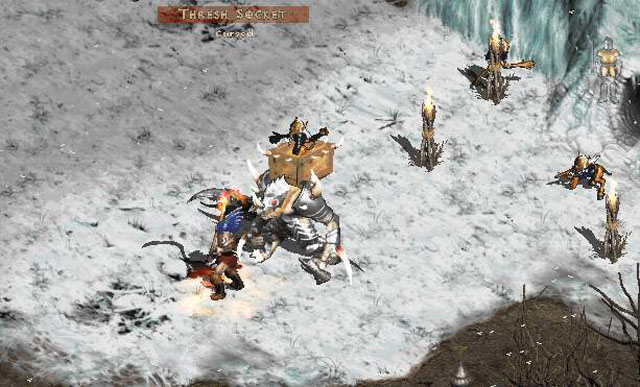 Abominables: Abominable are Wendigo type of monster. They have attack with cold damage and can stun you, if more of them catch you at the same time it might be hard to get out and survive because of constant stunning. 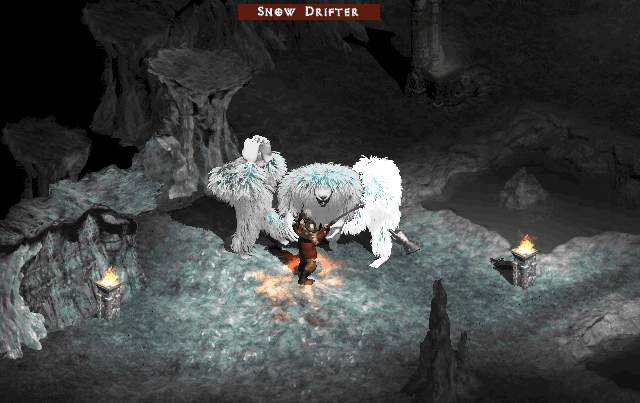 Reanimated horde: They have charge attack and that can be dangerous in certain situations. They also sometimes come back even if you kill them so be carefull to be around their dead bodies at low Health. 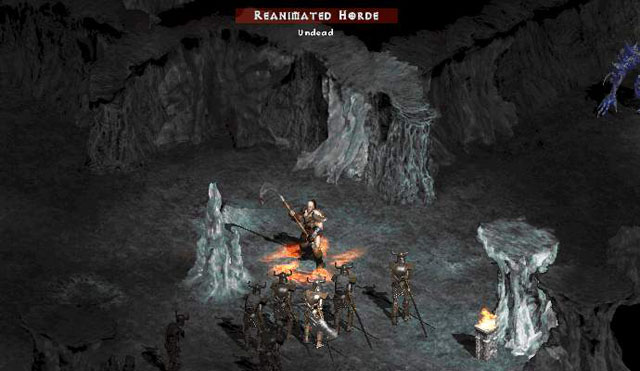 Frozenstein: Super Unique Abominable with pack of minions, Mana Burn and Cold Enchanted. Abominables have stunning attack and on top of it is Frozenstain´s group Cold enchanted so this encounter is definitely dangerous for anyone who is fighting at close range. Frozenstan is located at the end of Frozen River and you need to go pass him to save Anya. Dont try to face several of his minions and him at the same time at close range or you will be unable to use your skills because of mana burn and stuns. 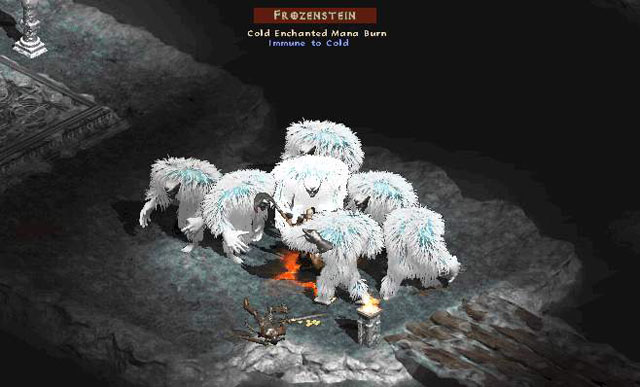 Succubuss: Very annoying and nasty monsters. The use mostly range attacks but can also use melee attack and both of their attacks always hits. They have also two curses: Defense Curse which will lower your defense if you have more Life than Mana and Blood Mana curse which they will use if you have equal or more Mana than Life. If you cast spells with Blood mana curse on you, the amount of mana required for skill is also taken from your Life. 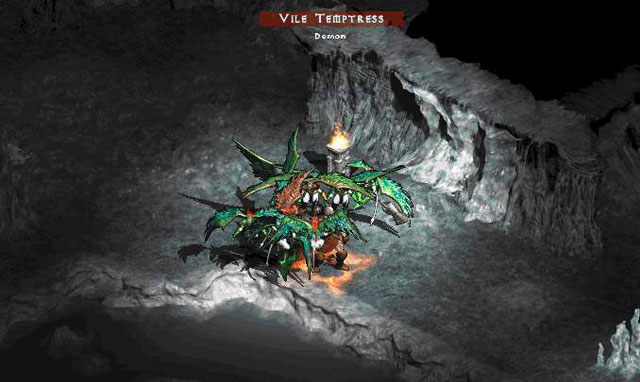 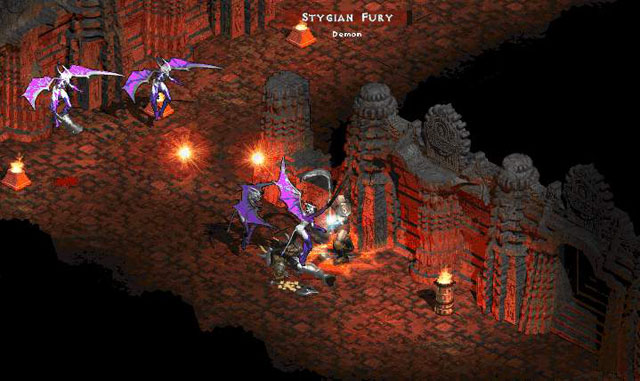 Blood Lords: One of the most deadliest monsters in game. They are big armored dual wielding minotaur-like monsters who can use frenzy attack capable of dealing huge amount of damage and it will also make them faster. If you face more of them and they hit you few times to charge their frenzy, you will die very fast. Use mercenary as bait, some crowd control skills when you fight them. Be extremely careful if you see pack with ability like Cold enchanted, extra strong, or with some auras boosting their damage. Also I suggest to not activate evil urns in locations where they can spawn. They also cannot be frozen or chilled. 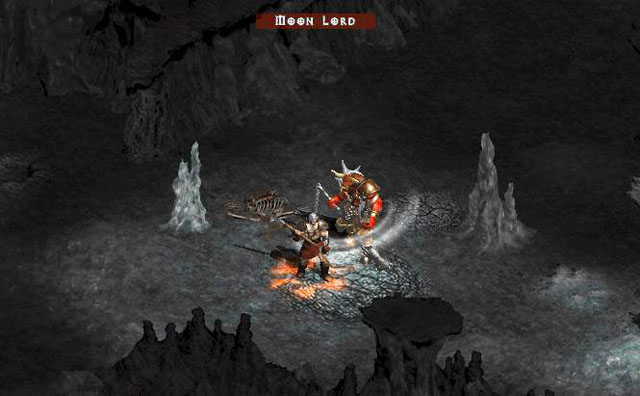 Bonesaw Breaker: Super Unique Reanimated Horde with pack of minions, he is Extra strong and Magic Resistant. His pack can hit harder because of Extra strong ability but they are usualy not so hard to deal with. Bonesaw can be found in Glacial trail in room with golden chest. 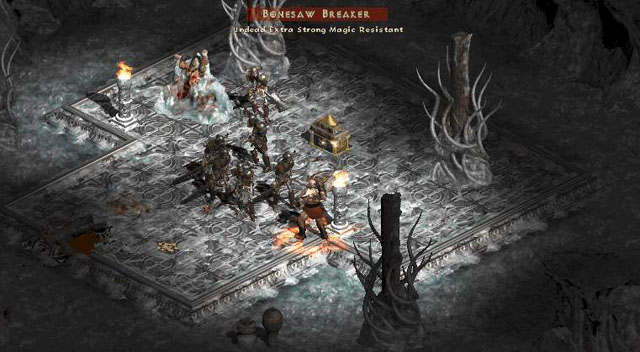 Snapchip Shatter: Super unique Frozen Creeper, Cold enchanted and Cursed with few minions. Frozen Creepers are annoying monsters because of their Arctic Blast and Snapchip is Cold enchanted on top of that. He can deal some solid damage with his Cold nova if you are cursed. He can be found in optional dungeon Icy Cellar. 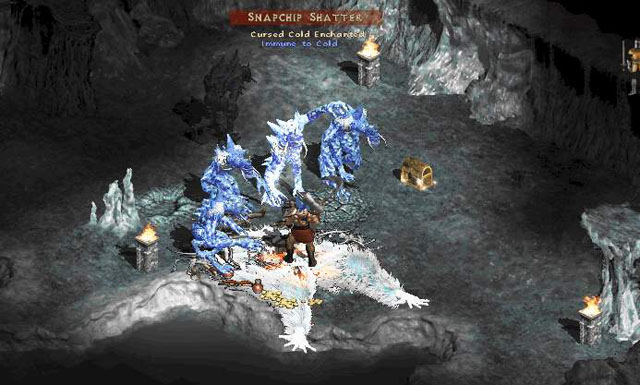 Pindleskin: Quite famous Super unique monster mostly being used for MF on hell. He is from Reanimated horde family with several minions with him. They have charge attack and Pindleskin is also Fire enchanted and if your fight takes too long, other skeletons laying outside of his place will be revived and will attack you from behind. Pindleskin can be found in Nihlathak temple if you enter to Red portal casted by Anya after you save her. Ancients: 3 Barbarian guardians at Arreat summit, they are basicly super unique monsters but they dont have any abilities on Normal difficulty. They can be found at Arreat summit where you can go from Ancient´s Way and you have to beat them to progress further. Fight is not easy and best way is to be properly leveled up when you face them. You will activate them by reading the book in the altar and once you do that, you cannot go back. But you can cast teleport and they will be place back into statue position and you can reset the fight. So if you are in danger, you can cast teleport to save yourself. 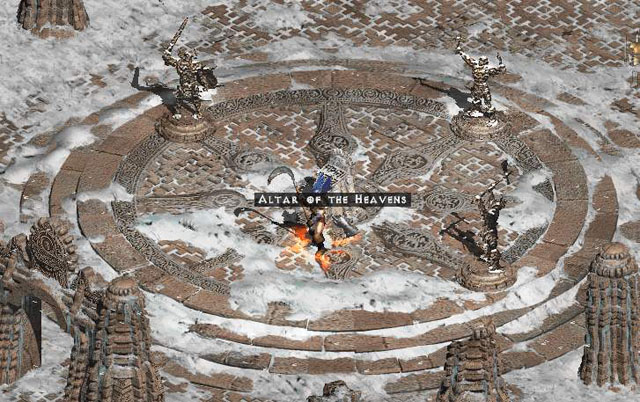 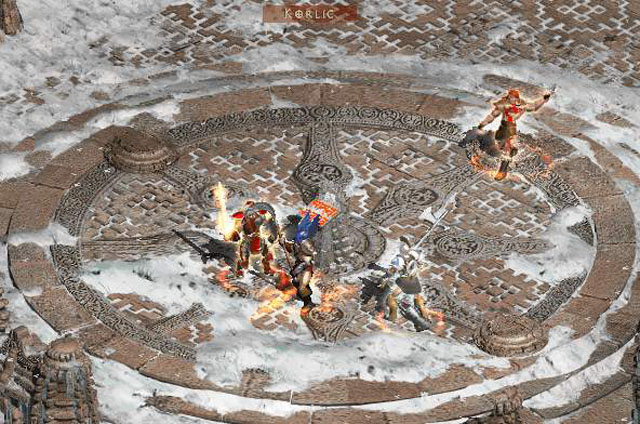 Achmel the Cursed: Achmel is super unique monster spawned by second Baal Wave in Throne of destruction, he has few Greater Mummies with him and bunch of Skeleton mages with cold attack. If that is combined with Decrepify curse from Baal, you will be horribly slowed. Achmel will be poison immune and he can cast on you very strong poison so try to have antidote with you as poison effect can last long time. Or you can just go to town after you kill them to heal yourself. Bartuc the Bloody: Super unique Monster spawned by Baal in third wave with several Council members who can cast Hydra skill. Bartuc is always Lighting enchanted dealing a lot of damage with that ability. Just kill minions first and let Bartuc as last to kill. Your mercenary will be probably dying against them a lot because of fire dmg from hydras. 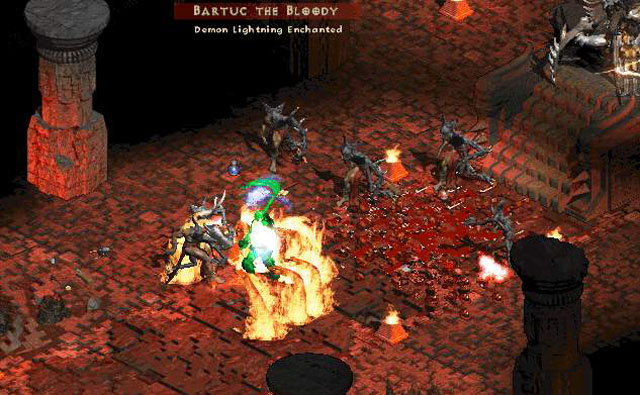 Ventar The unholy: Super Unique Venom Lord spawned by fourth Baal wave, Extra fast. Similar encounter as the one in Chaos Sanctuary, but less dangerous as you already have higher level, damage and probably more fire resistance to deal with venom lords better at this point. 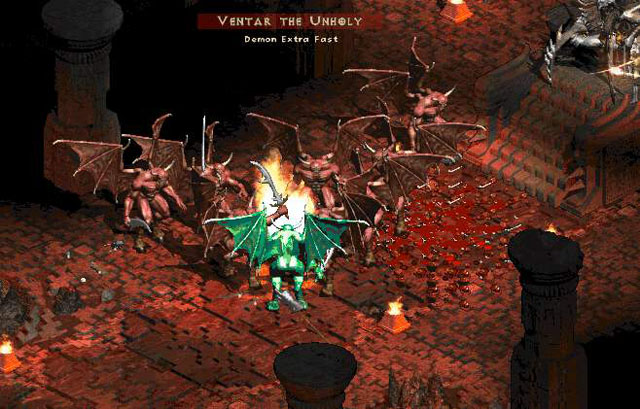 Lister the Tormentor: Super unique Minion of destruction, Spectral hit. Lister with his minions is spawned by last fifth Baal wave. Minions of destruction are very dangerous enemies, mostly for characters fighting at close range. They have a lot of HP, strong and fast attacks and have knockback attack. Basicly nightmare for any melee fighter. Dont ever let them surround you or you will never get out of it. Usualy it helps to lure them one by one away and kill them while they are not together. If you dont want to fight them at all, you can lure them away from Throne room to entrance and then run back and follow Baal. That way you can skip the fight if you are not capable of killing them. Baal: Final Boss of ACT V, but not so dangerous to be honest. Fight is more long than dangerous and you will die only if you dont pay attention to your life. Baal can cast various skills but they are mostly annoying than deadly. He can clone himself which makes the fight more dangerous as its not fun to be hit by two Baals at the same time. Usualy it helps to wait some time in town and clone will despawn. He can spawn Festering Appendage, tentacle-like creatures who cant move but deal some physical damage. You should keep clearing the area from them so they wont do some additional dmg to you. He can cast Defense curse or Blood mana curse with same requirements as I explained at Succubus encouner. Then there is Mana Rift draining Mana and doing magic damage, Incineration Nova shooting fireballs and Hoarfrost, cold wave spell with big area of effect, chilling you and knockbacks you. Baal also can deal a lot of damage with his physical attack at close range so keep that in mind.