This guide will help you build a a tanky assault!

Guide to the Assault Tank Build

So why would you build an assault that tanks? Because you can. Don’t ask if you should, ask if you want to. 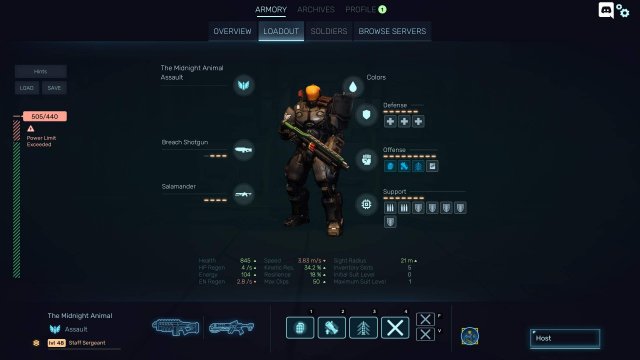 So it is simple.

Take a Breach Shotgun and a Salamander. You can swap out the salamander for a grenade launcher if you want, but the Salamander works just fine. The Breach Shotgun is actually fairly important for this build. Lots of damage, very efficient in dealing with crowds of trash.

So you want to place starting points into grenades and light weapons. Only one rank to the grenade for now. Max light weapons, then max cohesion if you have it. If you have Discipline, just take one point in that to start the stacks. No more in needed, so max your grenades or flame burst or what have you.

The Good and the Bad

So this is the closing segment. What is this build good at? What is it bad at? How much can you solo? How do you function in a team?

You stay alive and you clear trash like an absolute professional. This is your bread and butter. You are difficult to kill and deal damage incredibly consistently.

Big ticket enemies. Enemies with lots of armor. They will give you trouble. You are not equipped for that. You can manage, but it will take some time.

While this build can get pretty far on its own in normal, even a little in hard. It is best as a member of a diverse team. This build is meant to survive hordes, and punish trash. You have some minor armor strip, but you are not the boss killer. You can help because you have some pretty good damage out put, but your role is to be the King of the Garbage Dump. You are Lord of the Trash. They bow to you, bloody and quiet. If you get your hands on some nanite revival sticks, hold onto them because you can wade through death to get to a fallen team member and then clear the area while they revive.