This guide describes two ways to build the Techadept on higher levels, named the Flamer Tarantula Specialist and the Necromechanic Skirmisher. I had two requirements creating these builds- it has to be effective in clearing 10+ difficulty missions and it has to be fun to play.

With the arrival of the Season of the Void Brethren comes another balance package of greater volume, this one is focused on the Tech Adept class.

Construct weapon items are gone as we knew them, replaced by a simple resource-based upgrade system. Two module types have been removed which means less inventory management, but a larger pool of Godlike enchants on the remaining modules compensates. Weapon items’ powerful Godlike enchants like “Electric arcs on melee hit” or “Chance to trigger a Fabricator Scatter Field” are now available in two main enchant-pools (defensive and offensive) on Construct modules instead.

Another substantial change is the complete renewal of the class-specific passive trees of the Tech adept.

You’re not required anymore to spend passive points to unlock construct weapons (they come by reaching a fairly low level requirement), but certain skills which affect construct behavior (like charging, or extra aoe attacks) still remain optional and can be specialized towards. There are more passives to chose from, more ultimate passives to reach and a new requirement system in work: instead of following certain paths of passives, you only have to reach a set number of minor passives to be able to chose ultimate passives from the tree.

The list of changes are too long to be discussed here in detail, but other more significant ones are going to be covered in the guides below.

Here are two build variants I use to play the class at higher levels.

This kit is based on the new turret-arrive mechanism – this does AoE damage, slows/knocks down, and receive bonuses from any affix with physical or AoE bonus. Combining its effect with the new unlockable passive ability “Inextinguishable Promethium” (which gives Tarantula Flamer’s attack a Flee tag) grants you the tools to keep all enemies under constant crowd control.

Important note: The impact damage of the turret arrive is calculated from the TA’s own stats, including the character’s AoE dmg bonus and the character’s physical dmg bonus as well, so we’re going to try to increase these two stats as much as possible.

Starting on a map you can basically set up any Alpha weapon to use it’s extra slot to summon your Kataphron Destroyer, then immediately switch to your secondary set, a Voltaic Axe Beta from where you can summon the rest- 3 Flamer turrets and a Gamma turret.

Any Alpha weapon for primary, Voltaic Axe Beta as your secondary weapon- you’ll use this during combat.

“+x Shield Charge gained for every point of Dataflux spent” – You can find this on an Archeotech Purity Seal, or Ancient Relic Technomartyr Girdle. That’s the only enchant I consider essential on really high level. Seasonal Enchants like the Static-Flux Armor’s “+x% chance to trigger Thunderbolt of Authority” works nice too. I use the “+X HP Regeneration for every Vulnerability stack Inflicted” Godlike on my Relic Innoculator.

Other than that, you should have damage bonus for AoE skills, Debuff-based damage bonuses HP and max. Dataflux Enchants. 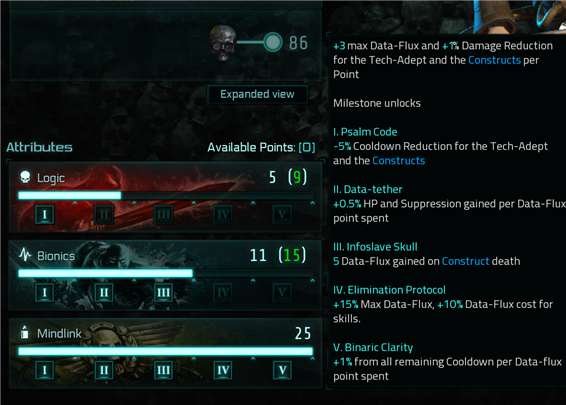 Support tree’s “Invigoratng Faith” is a must for every TA build in my opinion.

Basically these are the main pillars you can build towards when developing your character if you would like to use this AoE-smash/heavy cc playstyle. It’s viable on 10+ difficulty missions, fun to play and is quite safe.

This one uses an ideal mix of Constructs and a steady Energy shield while maintaining a high heat damage output from long ranges. Spamming Necromechanic Raiment’s active skill is going to give you movement speed and a stacking damage boost to your Constructs while constantly feeding your shield. This one might be good for players who does not want to diverge far from a classic summoner playstyle, but still want to stay active by managing resources, maintaining high speed and cleartime, Switching between the target designator and the small AoE-dps attacks of the Plasma Caliver as the battleground’s state demands.

I use a Plasma Caliver Beta as my weapon, placed on the second Set-slot of weapons, while using a Plasma Caliver Alpha as the first weapon, just like in the Flamer specialist build. We’re using the extra slot to summon a Kataphron Vanguard when we enter the map or lose our tank during fights.

For Construct slot one, I usually use a Voltagheist Turret, but it can be switched to a Gamma turret if you’re having trouble staying alive on extremely difficult missions. Psiloi combustors with Meltaguns or Lasguns are equipped as second, and a Kataphron Destroyer with Flamer and Plasma Cannon on the third.

Plasma Calivers for weapons. Use Technomartyr Girdle for the extra summon slot and Necromechanic Raiment as armor.

“2%HP and Suppression gained per point of Focus spent”- I got this on my Ancient Relic Armor (Necromechanic Raiment of Unity). My Eye Implant has the “Adds a Vulnerability to the target based on the damage type on Critical Hit” enchant . Any further enchant you can get your hands on, which applies Vulnerability (The seasonal Signum for example, or the Superheated Discharge Passive on the Heat Attacks tree) is welcome. The Ancient relic item “Technomartyr Girdle of Calculation” gives you X Shield Charge for every Data flux spent. This is rather important to have, works really well with your spamming of the Repair Constructs skill on your armor. Seasonal Enchants affecting Thunderbolt of Authority are usually a good choice as the rest of your godlikes.

This is another build that uses Mindlink as his main attribute 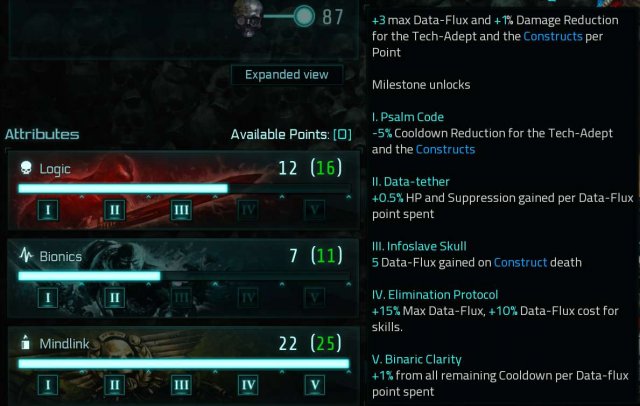 This guide will present the concept I use for most of my builds lately – aura-based, shock enrage. I’m explaining the core mechanics (as I understand them), and present one […]

Once you’ve reached Level 8, If you visit Merciful Agony MCXII, you have the option to purchase additional Attribute Points and Skill Points for some Credits and Fate. Where to […]