How to not die with 45 animatronics trying to kill you!

Which Animatronics Do I Leave Out and Why?

Funtime Foxy is generally considered to be the worst animatronic to deal with, and I definitely agree with this. In order to stop funtime foxy from killing you, you have to move your camera to his stage at the right time, this ruins the strategy that I will discuss later, about stopping plushies with cam 02.

Toy freddy plays his own game in his own room that like funtime foxy, requires you to move your camera from 02, ruining the strategy stopping plushies.

Foxy is one of the hardest animatronics to deal with, and without having them selected, bonnie will be on your desk 100% of the time, which is very easy to deal with compared to foxy.

Chica and the Puppet

Without Chica and the Puppet activated, you can ignore cam 04, and can almost completely ignore the global music box, unless you agitate lefty, which I will discuss later.

Starting the Night, and the Inital Cam Flip

To achieve this score, you really dont need any powerups, DeeDee repel is optional, but if DeeDee does actually spawn an animatronic into your game, I usually just restart the night immediately because of how rarely that happens.

The first camflip is the most important for this strategy to be successful. As soon as the night begins I do the following things: 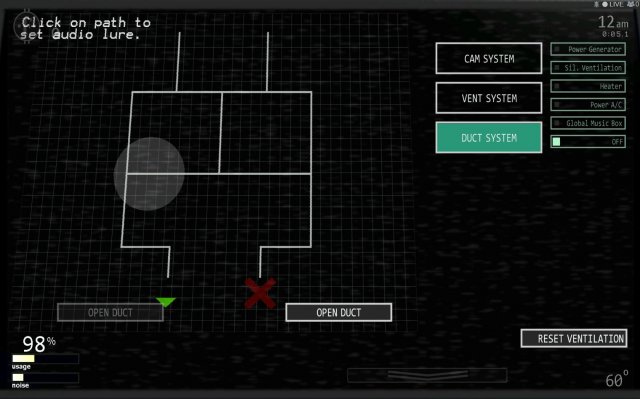 By the time you have done all this, your office will have heated up, so turn on the power A/C to cool it down.

Remember to make this series of camera movements fast, to conserve power, as well as to avoid phantom mangle and phantom BB.

After the Initial Cam Flip

The majority of the night is spent in the office, with your mouse on the left side of the screen, so that you do not accidentally die to nightmarrionne. The power A/C can be on most of the time because you dont need the global music box, and power is generally not an issue because of this.

Things to Watch Out For

While you are stalling in your office, most of the animatronics can not kill you, but there are a few that you need to watch because they can.

If you do not reset the ventilation every 45 seconds, your screen will go black, and you can not let this happen, meaning that you have to do cam flips to reset your ventilation at intervals less than 45 seconds (usually 30-40 seconds).

How to Safely Open Your Camera

Now that you have learned how to deal with 42 animatronics, there are three left that have to be individually dealt with.

Some Things to Remember

Ultimate Custom Night – How to Get 2000 Points Easily

Do you want to get that second office and cutscenes without slight difficulty? Well follow this guide, and you’ll be on your way! Other UCN Guides: Some Animatronics Guide. How […]

Ultimate Custom Night – How to Cheat

I made this guide since I didnt see this kind of guide done yet for this game, and with it, you can get infinite items and a HighScore of 10000, […]