This guide is for new players to decide what to spend their precious training points on including a full guide of the most useful spells and where and what level to train them.

What Are Training Points?

To get training points you can do one of two things: 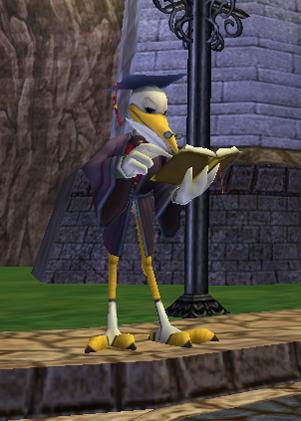 In total there is 86 training points you can obtain in the game, granting a lot of spending power to train spells.

What Spells Are the Best to Pick? 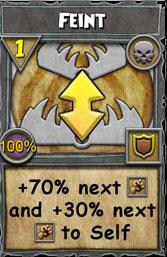 To train a certain spell from a teacher, you will have to train every spell underneath it. To train feint, one would have to train every death spell from Malorn Ashthorn, or Dworgyn the death teacher until they reach feint at which point they can train it. This will cost a lot of training points and can be tedious if you run out of training points which is why the Prospector Zeke quests are so helpful.

If you are playing solo it will be worth while to invest in spells such as tower shield, the level 16 ice spell from Lydia Greyrose, the ice teacher in Ravenwood. To train this spell one would only need to train 4 other ice spells before it, but the tradeoff is worth it. Tower shield is a spell that casts a universal shield spell to block 50% of all incoming damage for one hit, useful if the enemy has a lot of pips and for a pip cost of 0, this spell is definately a necessity for any soloing player.

Another spell worth training up to is reshuffle. This spell is given by Mildred Farseer in Colossus Boulevard, and because this is a secret spell vendor you will not need any spell prerequisites to train this spell. This is a secret shop in the door by the roundabout with Mindy Pixiecrown. This spell is a 4 pip balance spell which reshuffles all of your cards, minus reshuffle, back into your deck to be used again. This spell is useful for every school to learn even if you are playing in a group, as being able to reshuffle anyone at a whim’s notice is extremely powerful. This spell allows people to keep minimalistic decks to increase the chance of drawing spells the user needs to set up for attacks, heal, or shield players. This spell is a necessity for any player playing the game.

Satyr is a life spell obtained from Moolinda Wu in Ravenwood at level 26, requiring a total of 7 training points. Satyr is a 4 pip life spell which heals 860 hit points to any one player. This spell is essential for schools which do not have any means of healing, primarily myth, ice, and fire. This spell comes for free for life school wizards which is a big bonus, but is also useful to the spells mentioned above. Storm, balance, and death wizards have the option of skipping this one because those school come with healing current, availing hands, and hit to heal spells respectively.

Weakness is a spell taught by Alhazred in the Balance school at the krokosphinx of Krokotopia. It is also taught by Arthur Wethersfield in the commons, both vendors require level 8 and 3 training points. This spell is useful in the fact it casts a charm on a single opponent which reduces the amount of damage their next spell will do by 25%. This is useful for support characters, but not so much attackers or healers. It is 0 pip which is also a big plus. 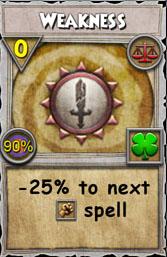 These are spells which reduce the amount of damage taken by a certain school by 80%. All of these spells are available for 1 training point, unless you master in the school of which the spell is, and are accessable at level 10 from Sabrina Greenstar in the Wizard City Commons’ Fairgrounds. 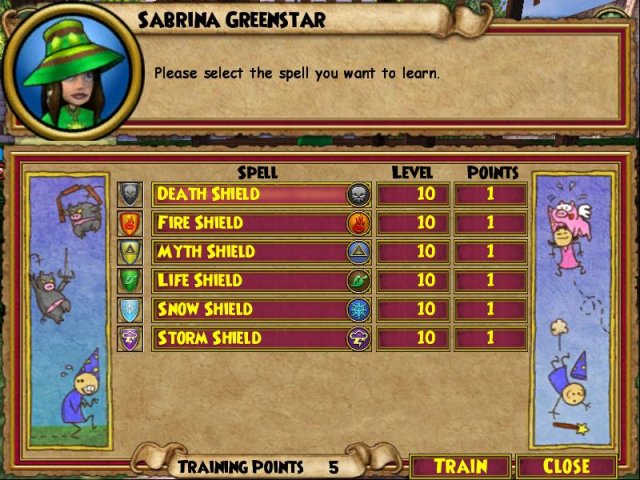 This group of spells is taught by Niles the balance tree at level 15, requiring no prerequisite spells and only costing one pip each. These will always work in conjunction with those spells which exponentially increase the amount of damage output. These blades and trap stack with school specific traps and blades such as storm blade, storm trap, etc. Elemental spells refer to those of school storm, ice and fire, whereas spirit spells refer to death, life, and myth. For attackers, it is useful to train the blade and trap of your school, so a storm wizard would train elemental trap and elemental blade, however support characters would find it beneficial to train all 4 to support any possible school needed, for a total of 4 spells.

The best astral spells to train are the sun spells Strong, Giant, Monstrous, Gargantuan, Colossal, and Epic, each one increasing in power. Astral spells are spells which you enchant normal spells with. For example a spell doing 100 base damage, if enchanted with a Strong sun spell will do 200 base damage before applying all the blades and traps attached. These also exponentially increase damage output and are essential for quick kills in the late game. These spells become available at level 50, 52, 54, 58, 64, and 110 respectively. They are trained from the sun trainer in Celestia base camp for the first three, the next one available in the Sun trial at the end of celestia, in the Drum Jungle in Zafaria, and by Qyburn Stellargaze respectively.

This section refers to potent trap, and sharpen blade. These spells are available at level 86 from the Sun pillar trainer in Three points of Azteca. To get these spells you will need to complete the star pillar trainer quest first then complete the sun pillar trainer. Both of these are given from the dinosaurs in the Zocalo of Azteca at level 84, and 86 (Level 84 is for the star spell, 86 is for the sun spells). These both include a battle 3v1 which could be very difficult but the challenge is much worth it. These spells enchant and trap or any blade with +10% making them unique compares to their default allowing them to stack. By this I mean that a storm blade, which is normally +30% damage to the next storm spell, can stack with the sharpened blade version of this spell, which is +40% damage. Not only are you getting the benefit of the normal blade but also the benefit of the sharpen too which makes these spells TOO GOOD TO MISS! Do not avoid these spells, the challenge is by far worth it. These can be used on any blade or any trap, including feint. These spells are a must have for any wizard.

In addition to these Celestian star spells come the Aztecan star spells as mention in the last section. These are obtained at level 84 in Three Points, Azteca and are school specific, each increasing the school’s damage by 25% and accuracy 5% or 5% power pip chancefor the trade off of 10% incoming damage of the opposite school. These are extremely good too as they serve as an additional blade. 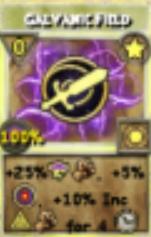 Wizard101 – How to Transfer Your Old Account to Steam

How to Transfer Step #1: Go to the shortcut for opening Wizard101 on your browser, and right click it, select “properties”, then “open file location”. (The directory location for this […]