As usual with status-based shotguns, the most important goal is to reach 100% Status Chance before Multi-shot is calculated. This can be achieved by adding a minimum of +177.8% Status Chance to Exergis (three 60/60 elemental mods without a Riven, two with an average Riven, only ONE with a perfect Riven). Once you hit that 100% sweet spot, every pellet will proc on every shot.

The standard 100% status build. Vicious spread currently has no negative effects on exergis. Ammo Stock, and Chilling Reload are entirely optional, but highly recommended. You can swap Vicious Spread for Vigilante Armaments for an extra ~2/3 procs per shot, and Scattering Inferno can be replaced with Shell Shock if preferred. Be wary of adding more elemental damage than necessary, as it will dilute your proc pool and make Slash/Viral less likely to occur. Adding +Damage% or +Multishot% instead of +Elemental% will raise overall DPS without altering the status proc ratio.

A ++/- Riven with over 117.8% Status Chance and as much Multishot as possible, with a relatively-harmless negative (-Puncture/-Impact/-Zoom/-Ammo are ideal). Ammo pool is reduced to 24 shots on this one, which proves to be more than enough for the weapon’s abysmal effective rate-of-fire. 13 procs per shot with Hell’s Chamber and Vigilante Armaments. 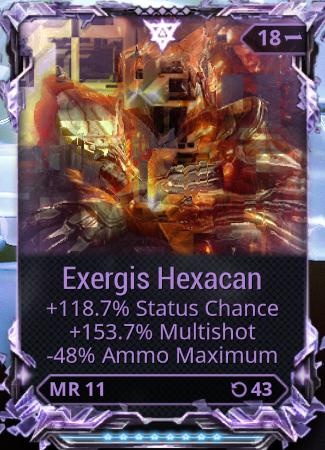 The Riven build. Green stats on the left reflect the improvements over the basic build. The second and third status mods have been removed, and the third elemental type is gone. Slash procs are the priority! Absolutely no more elemental damage than necessary.

No Multishot: 3 procs per shot.

Want to know what abilities affect Demolysts and how? Here’s the place to check. This is a list of every single Warframe ability, how it affects Demolysts, and all the […]

Warframe – How to Defeat the Razorback (Boss Guide)