Hello! In this guide will be about the new Peggasi Oppressor to GTA Online, added in the recent Gunrunning update. I hope you enjoy the guide!

These two images show How much the bike costs, information about the bike, the looks of the bike and the stats of it. 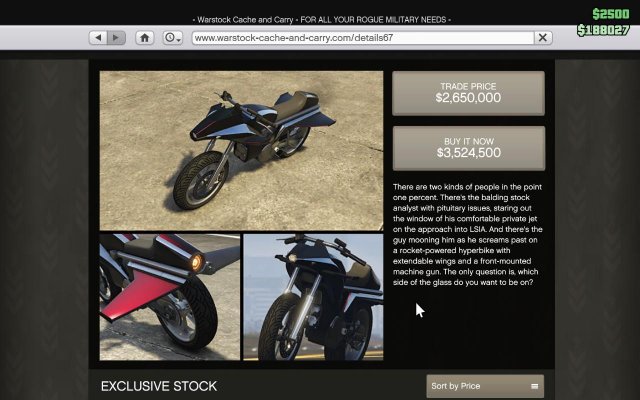 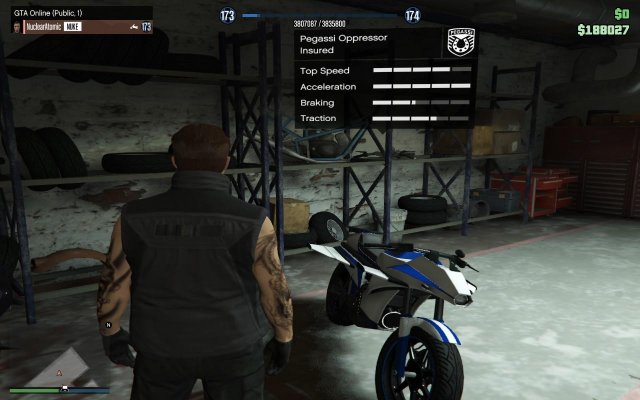 It is much easier and cheaper to get it, especially when you complete two missions, you get $874500 off the original price, I suggest doing just that!

Description of the Oppressor

There are two kinds of people in the point of one percent. There’s the balding stock of analyst with pituitary issues, staring out of the window of his comfortable private on the approach into LSIA. And there’s the guy mooning him as he screams past on a rocket-powered hyperbike with extendable wings and a front-mounted machine gun. The only question is, which side of the glass do you want to be on?

For flying in the air, you need a bit of practise, it will be difficult for your first time using this bike. Personally for me and most people, you have a numpad on the right of your keyboard. For me, I use a Challanger gaming keyboard prime, which has all I need to easily play games on the PC.

I made a youtube video of myself showcasing it and playing around with it a bit, it Is low quality and I apoligise about that, but I just use OBS and have a FPS of around 35. Other than that its just a 6 Minute video of me driving, flying and gliding around.

For upgrading this bike, you will need a MOC centre and the Weapon & Vehicle Workshop upgrade that goes for $955,000 but is worth it if you are going to buy the new vehicles (APC, Dune Fav (Buggy), Half-Truck, Oppressor (Rocket Bike) and Weaponized Tampa.

You don’t have to spend too much upgrading and customizing it but one upgrade you need to get ASAP is the rocket upgrade, which replaces the front miniguns with 20 rockets with homing abilities, this can make you a terror in the sky. The upgrade costs $195,000 but you have to unlock it via the research lab on your bunker computer. There are 45 current total research upgrades you can get, costing $225,000 if you fast track each upgrade from the start, to the end. Costing you a large $10,125,000 if you fast track all the upgrades. The upgrades are completly random.

The Main Uses and How You Can Use Them

The main uses would be Utility, Defence, Support and Attack in my opinion.

Utility as a tool, a fast way to get around while dodging enemies on the ground.

Defence in defending an area, you have the high ground and can dodge incoming attacks eg: homing missiles, RPG’s your main attacker might rifles and miniguns.

Support would be used to help your CEO, friends, MC or VIP push through a crowd of enemies, it has large stomping power of having 20 rockets maximum, you run out you can instantly call another one via MC interaction menu.

Attack the beast called the Oppressor is difficult to take down and will need multiple people to easily take one out of the skies for good. You can tank enemy aircraft with 20 rockets and troops on the ground.

Why You Should Buy It?

Just how much fun it is, you can do multiple stunts on this amazing bike!

Q&A About the Oppressor!

In this guide, I will show you how to get enter a solo session 100% of the time without much hustle. Step #1: Joining a Session Join any GTA Online […]

About the compound entry points and secondary target in the compound base, just need to move all the cameras from left to right or vice-versa during the scope out mission. […]

The famous Bogdan glitch. Step by step. Max 4 million GTA dollars per hour. How to Glitch Step By Step Summary How to do the glitch: Start Act II, Split […]