A guide which covers simple gameplay tips & tricks which increases your survivability long enough and the planning of your playthrough.

Take it Slow: Isolate a target and take ’em out individually and then focus on the next one, don’t risk your life just to kill a group in one heavy strike until you get familiar with the behavior of enemies and gameplay, because the game punishes you severely for small mistakes, play it safe!

Ambush: Double jump your butt out of there or roll away instead of holding your ground preparing to strike them all in one blow, DON’T RISK IT! There are high chances that you will be banged by some enemy you aren’t aware of. Do the same if you are having trouble with an elite guy, but he can teleport wherever you go if you reduced his health to half and also summons his minions along with him. Use equipment and delay them, Ice Grenade is a life saver in these situations.

Someone there?: See some tough enemies infront of you but they didn’t see you yet? Use your equipment or bow and arrow and reduce their health down. Note that the Phazers tend to launch surprise attacks on you even though they haven’t seen you yet.

Instinct: See an exclamation mark above enemy’s head? Its time to roll or block the attack with the shield, timing is everything. Use roll to get behind an enemy and slash ’em up real good.

Breach them doors: Use the doors to your advantage as they can stun the enemies that are on the other side, even large groups as well after which you can take ’em down in one big strike. Careful around the Grenadiers though, they become aware of you when close enough and shoot a projectile through doors, walls or floors!

Strength comes first: Always buy the Scroll of Power from the shop and invest in +1 Strength! The higher the strength the easier you can kill your enemies because as you progress to another level enemies get a lot tougher and current DPS won’t be enough, you may have your own strategy on this one but trust me, once you git gud you don’t really need a health upgrade at all and you will always find one in your journey at approx half of the cost in the store anyways (same case with Skill scroll) But keep in mind that you need higher level weapons as well to further increase the damage stat.

Worst trap ever!: In an intense combat while maneuvering enemy’s attacks, you might end up holding onto the god damn chain and lose health or even die in the process, they’re the worst death traps in the game than the most obvious traps.

Hidden Secrets: Small rocks with a bluish spiral insignia. Break it down and you might find some gold or food. If its below the ground then it summons a portal to a challenge area. It can’t be noticed unless you go really close to it, illuminated by the light emitting from your umm… head? Keep an eye for those rocks.

Never underestimate common enemies: Look out for the archers. They seem so easy to kill and dodge the attacks just by crouching down but when in groups, him and the other common enemies such as Grenadiers and Zombies are a real pain in the butt. They go farther away (except for the Zombie) and gain more advantage over you while you are trying to fend off enemies that are melee based. Just never underestimate these basterds.

Crouch Shot: The bows are the only weapons which can be shot while crouched. The rest of the weapons when used while crouched will only make you stand up and vulnerable to arrows or grappling hooks.

Runes: Ever saw some areas that are too far to reach or there seems to be no other way to get there? You need ‘Runes’ to get there, there are two of them at the moment and once you get it, it’s yours permanently. You can get these runes by defeating special elites in game. Vine Rune is in The Promenade of the Condemned and the Teleportation Rune is in The Old Sewers. Get them as soon as possible and you can visit various areas with good loot at the beginning itself.

Spendthrift: Don’t be scared to spend your gold, because you will die anyways sooner or later and lose everything, but investing it in upgrades will increase your survivability long enough and get familiar with higher floors.

Unlocking: Invest your dead cells mostly in unlocking Health Potions and Gold Recovery upgrades and the rest of it for other smaller upgrades and unlocks. If you completely maxed them out then you could have a higher chance to go to the end, and roam higher floors with ease.

Before you unlock: Don’t just blindly invest in unlocking newer weapons or equipment as they only decrease the chance of spawning your favorite loadout and you may probably regret unlocking it, it may not be your kind of weapon. Read wiki before you unlock them. It doesn’t mean you should’nt try other weapons or equipment, try everything to see what works best for you.

Shorter Paths: There are some shorter paths to get to the end of the game quickly, but its not really recommended as its very risky without proper weapons, equipments, amulet and levels of Health, Skill and Strength. But I’m listing the paths here anyways. Note that Teleportation Rune is required to enter Ossuary.

What lies beneath?: One of the common mistakes everyone makes: Directly jumping down without any idea. Slowly climb down using the chains/pipes to go down and scan for enemies, especially at higher floors. Those Slashers will slice you up before you know it.

Spam Attacks: Be extra careful when you are using heavy weapons or spells such as Broad Sword or Lightning Bolt for example, you only end up getting hit pretty hard by other enemies when they are on either side of your position, you cannot roll, jump or crouch in such state.

YOLO: Save a 3000G for opening a locked door of Second Chance Heart. It can save you in boss fights and when ambushed. Upon activation, you freeze all nearby enemies. Won’t work if you’re cursed. 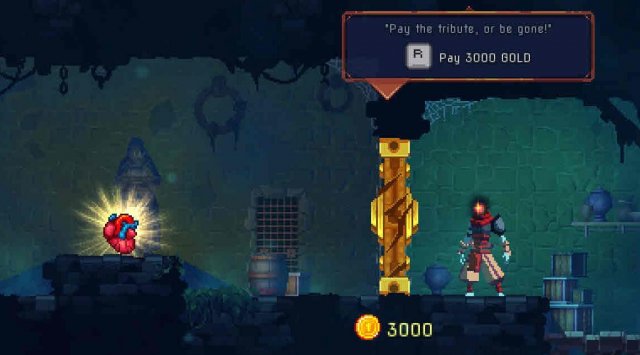 Toxic Pools: While in sewers, if you fall in some acid pool of toxic waste, jump away as soon as possible and you won’t take any damage.

Cursed Chests: These chests drop 3 good items everytime you open it but alas you will enrage the gods and you’ll be cursed. Take a small hit and you’re dead meat, kill 10 enemies carefully and you can lift the curse. So open these only if you encounter them at the beginning levels such as Prisoner Cells or The Promenade of the Condemned. For higher levels, ignore it unless you are well equipped and have higher strength (lvl 6+) otherwise it’s just a deathwish.

Swarm: If you have a lot of flying enemies in your way, try to lure them all your way and use an equipment such as Grenades to take them all out at once. Magnetic Grenades can kill all of them even through walls if placed close enough. Whips can auto aim and can be of real use here.

Defy gravity: You can perform your weapon combo in mid air without falling down.

Booby Traps: Some of the chests might be booby trapped, they spawn ridiculous number of flying enemies and 3+ zombies.

Free on Unlock: You can get a weapon or equipment for free when you unlock it from the Collector. Its level is based on the floor you’re going to.

Double Damage: Some weapons give you a special power called Double Damage and couple that with your strength lvl, the total damage grows leaps and bounds that you could do some real damage to all of the enemies, however keep in mind that their attack damage is doubled on YOU as well! It’s represented by 2x with a skull icon on top your head. 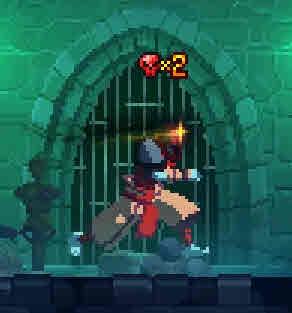 Health Regain: When an enemy hits you, a lot of health is depleted, don’t run away but hit him and others as fast as you can and you can regain most of the lost health.

Pole Weapons: War Spear or Impaler. Keep either one as a main weapon and you can just sweep through the floors with ease, just keep some distance between you and your enemies and spam that attack button. Look out for the flying enemies though, it doesn’t seem to hit them if they are a bit above or below the hit range. Elites aren’t so hard to beat with these, even the bosses. Blueprint for War Spear is dropped by the Mechanical Spider and Impaler is dropped by The Incomplete One.

Sitting Ducks: Use Ice Grenades on enemies that are roaming in a pool of water, the water is still frozen for a longer period than the enemies. Fire Brands or Fire Grenades wont work here unless they hit the enemy directly.

Mist: Many dark creatures that lurk in the mist are almost invisible, you could look for the slight shimmering when they are moving, count how many are there and plan your attack. Estimate the size of the shimmering enemies: The bigger it is then it might be a Slasher or a Catcher, smaller ones are maybe Zombie or Thorny. You could immediately recognize the Mechanical Spider as it spawns craploads of flying enemies towards you. While in Graveyard, AVOID line of sight against shimmering enemies even if there is a gap between you and enemies. A Catcher once grappled me towards him from so far away and I got gangbanged by both Slasher and the Catcher inside the mist ;-;

Don’t use: Sandals and Whips, just don’t, unless you maxed out their damage levels.

Other Dead Cells Guides: 100% Achievement Guide. All Blueprint Drops and Locations. How to Unlock the Hidden Achievements. Tier List: Primary and Secondary Weapons. All Weapon, Skill, Mutation and Rune […]