Facing the various boss enemies in Valheim is sure to get your adrenaline rushing. Every boss poses a unique threat and only by defeating each one are you given materials needed to help progress the story, as well as its Forsaken Ability. 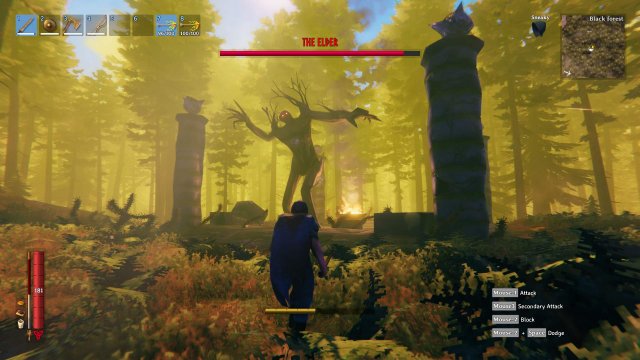 How to Summon The Elder

The Elder is the second boss in Valheim and can be found in the Black Forest biome. As with Eikthyr, you’ll need to find a ceremonial site and offer a sacrifice to summon the guardian of the Black Forest.

Step One: Explore the Burial Chambers

While you can naturally explore and find The Elder’s summoning site, there’s an easy way to mark its location on your map. This requires exploring the various Burial Chambers scattered throughout the Black Forest.

Within some of the Burial Chambers you’ll fine a runestone that registers the location of The Elder on your map. Press ‘E’ on this runestone when you find one and check your map for the updated location. 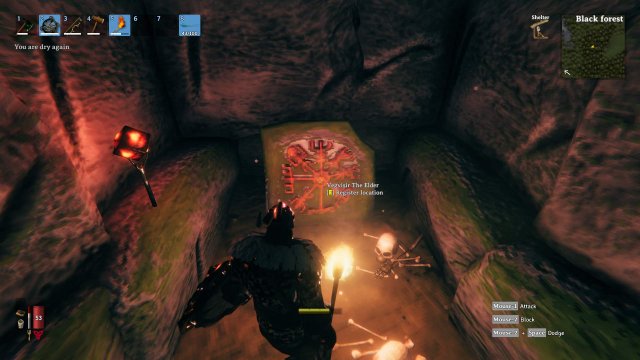 Once you’ve discovered the location, make your way to the site of The Elder by navigating to the icon on your map. 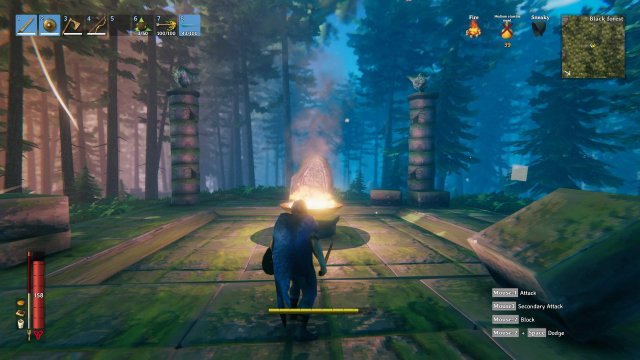 You’ll arrive at a site with four large columns and a fire burning in the center. On one of the sides is a runestone with information needed to summon The Elder.

The message on the runestone reads “BURN THEIR YOUNG” 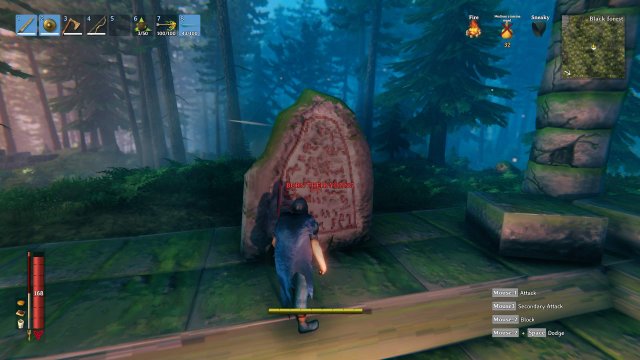 So, you know you’ll need to hunt something else and burn it in order to awaken The Elder. If you look around the ceremonial site, you’ll notice some odd-shaped items atop the four columns. This is a reference to the item you’ll need to collect: Ancient Seeds.

The next step is to gather the Ancient Seeds. These can be found by destroying the Greydwarf nests scattered throughout the Black Forest biomes. You’ll need a total of three Ancient Seeds to summon The Elder. 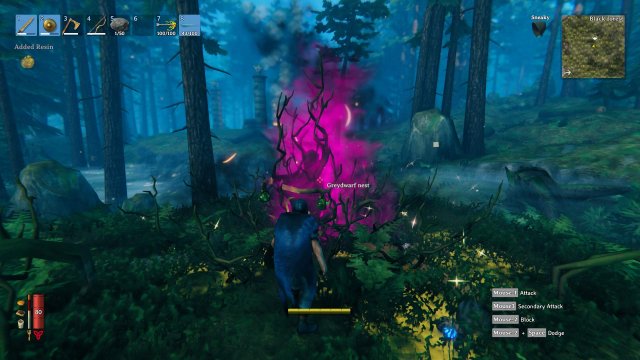 These are small, tree-like objects radiating purple smoke. The easiest way to destroy these are by running up and hacking at it with your weapon, or firing arrows at it from afar. You can take the hint from The Elder’s runestone and burn it with your torch or fire arrows, as well.

Each Greydwarf nest is guaranteed to drop an Ancient Seed. You can also get them as rare drops from defeating a Greydwarf Brute or a Greydwarf Shaman.

Before you take on The Elder, make sure you’ve got your best gear. This boss is significantly more difficult than Eikthyr. Bring some friends to help, if possible.

Ideally, you’ll want a full set of Troll Leather Armor or Bronze Armor, as well as powerful melee weapons or an upgraded Bow. It’s also recommended to bring (a bunch of) Fire Arrows, as The Elder is made completely of wood and doesn’t like fire. Don’t forget to eat, too! If you’ve got access to meads, it’s wise to bring along some Minor Stamina potions, too, as you’ll be doing a lot of running and arrow-firing.

It’s also a good idea to build a set of portals to easily get back to the arena and grab your dropped gear if you’re not successful. Alternatively, you can build a home (complete with a bed) in the forest somewhere close by to set your new spawn point upon death. 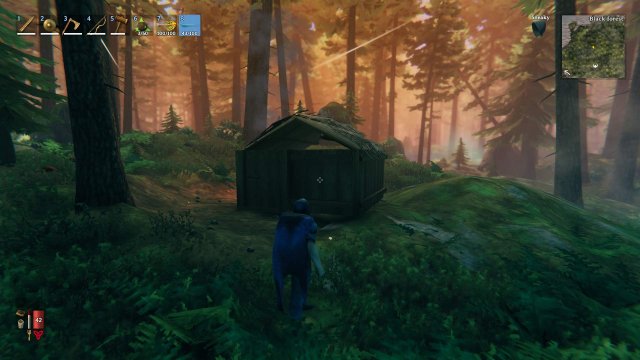 Once you’ve acquired three Ancient Seeds, head back to the ceremonial site on your map. 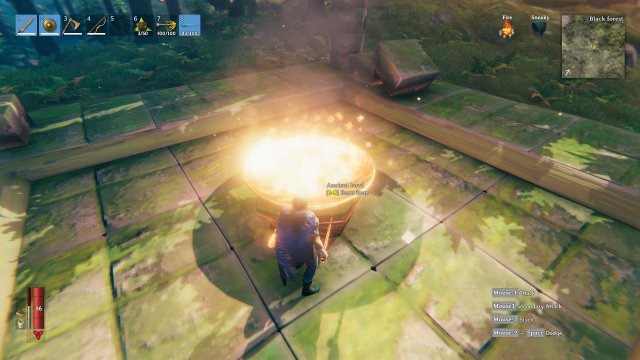 Approach the fire in the center and add your Ancient Seeds to your hotbar. Throw them into the fire by selecting whichever slot you’ve placed them into. Run to a safe place as The Elder will spawn shortly afterwards.

How to Defeat The Elder

Valheim’s second boss is no joke, so be ready for a difficult fight. To start, The Elder is a giant hulking tree and significantly more intimidating than Eikthyr. 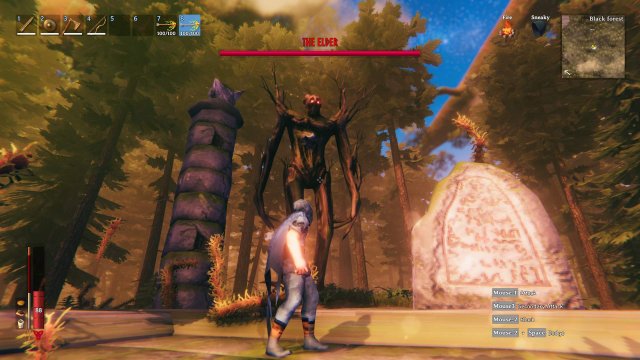 It utilizes a mix of both melee and ranged attacks, so you’ll constantly need to stay on your toes to make it out alive. Up close, The Elder can stomp on you and swipe at you with great force. While you can block a portion of these attacks, it’s generally not recommended to stay close to its feet for long periods of time. 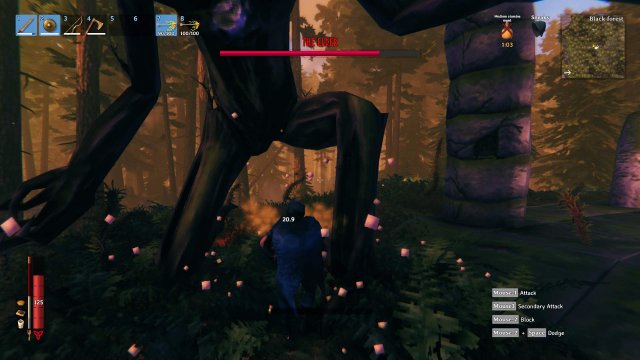 No matter what distance you are fighting at, The Elder will also summon vicious roots from the ground that will lash out and attack you if you’re too close. These roots are fairly easy to take down, but they are just as easy to avoid completely, too, as they will eventually despawn. If you’re feeling brave, you can run in and slash at The Elder’s legs while it’s summoning the roots to attack. Just don’t stay in there too long!

Lastly, the most devastating attack The Elder possesses is a ranged attack that consists of it launching a series of spiked roots at you. These can go surprisingly far and break through just about anything. So, hiding behind a tree or rock isn’t going to do you much good here, unfortunately.

If you’re caught in the spiked roots, The Elder will pull you into the air and sap a large amount of your health. It’s best to avoid this attack completely by running to the side of it or dodge rolling out of the way. 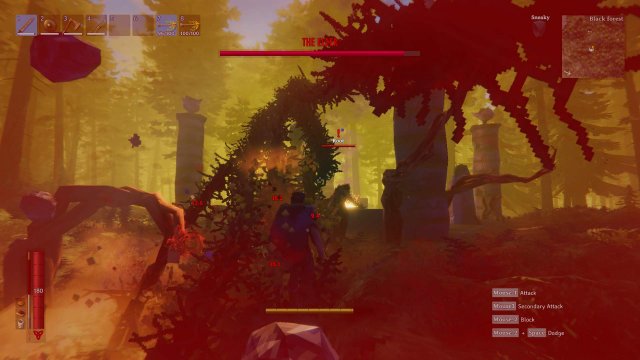 Thankfully, The Elder does a good job of telegraphing its moves, and the quicker you can identify each attack, the better prepared you will be in the long run.

The best defense you have with this arena are the four pillars located at each corner. These are indestructible and provide much-needed cover from The Elder’s devastating ranged spiked root attack. 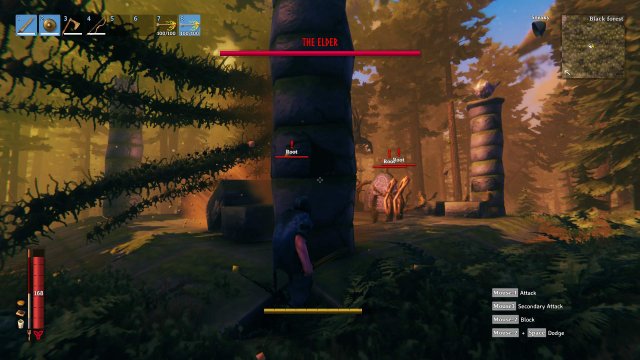 Always keep one of these pillars between you and The Elder, and when it lashes out to attack, simply hide behind the pillar to avoid taking damage. If you’re quick enough, you can get some arrow shots in after it finishes the ranged attack animation.

Continue moving around the arena as The Elder approaches you. A good time to move to another pillar is when it summons the roots from the ground as this animation takes a moment and gives you time to get to safety.

The key to this fight is to keep The Elder at medium range, avoiding (or elminating) its summoned roots, and staying away from its spiked root attack. Keep a steady barrage of fire arrows on The Elder, as the fire will damage its health over time and keep its health bar slowly draining as you navigate the arena. 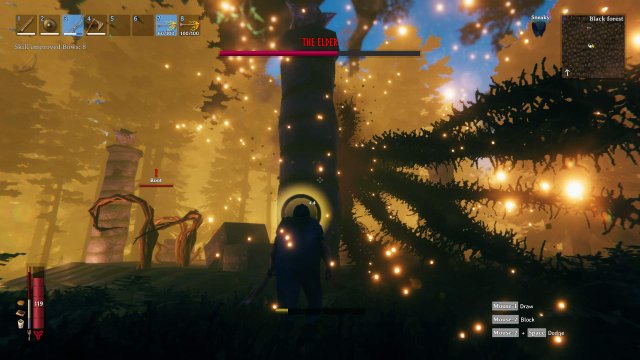 Also, beware of Greydwarfs or other enemies wandering into the arena during this fight. They can take damage from The Elder’s attacks, but it’s best to eliminate them yourself as quickly as possible to avoid any unwanted attacks.

After you’ve taken its health down about halfway, the arena will turn green. At this point, a Greydwarf Shaman will enter the arena and begin healing The Elder. 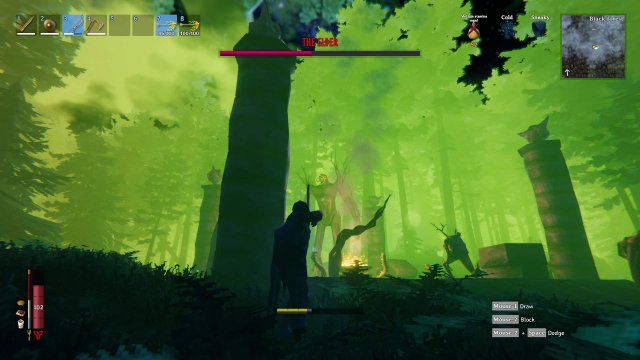 Find this Greydwarf Shaman and eliminate it as quickly as possible. Be cautious of its poison spray attack which will cause damage to you over time. It can also heal itself, so it’s best to take it out quickly. 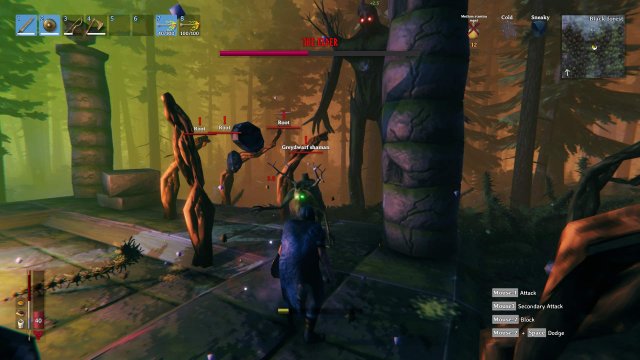 Stay vigilant, keep firing fire arrows to whittle down its health, and eventually you’ll take down The Elder.

When it dies, it leaves behind its head as a trophy as well as a Swamp Key that you’ll need to access the Sunken Crypts in the Swamp biome. 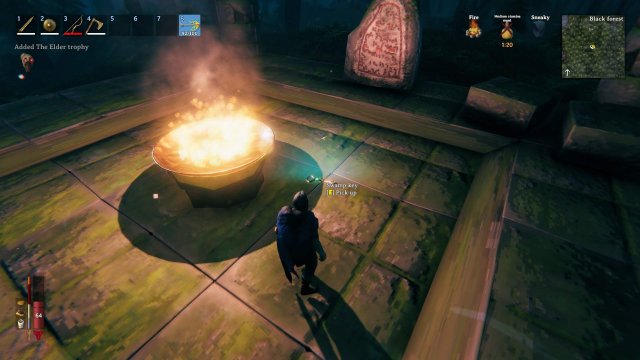 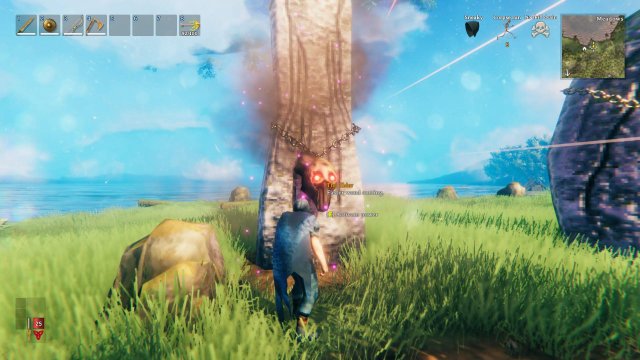 Valheim – How to Portal with Metal

Valheim – Setting Up a Dedicated Server

This guide will help you setting up a dedicated server or you can click the link below to order your own game server! Click here to Create an Instant Valheim […]