Obviously the three classes with bullet buffs are extremely powerful and can mow down enemies. This build, unfortunately, focuses on bullets, too. Fortunately, however, they are through the Tool of Destruction’s hold skill, the minigun. Here’s how it works. 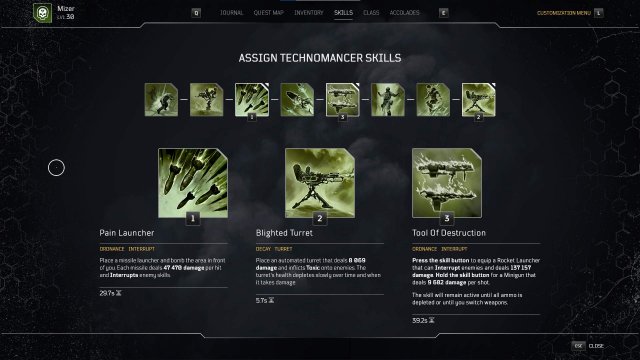 It’s sad that the Grim Inventor set buffs the rocket launcher with its tier 3 mods and ignores the much better Minigun, but it is what it is. This build is so focused on the minigun that if you do accidentally pop the rocket launcher (which is actually somewhat easy to do), you’ll be in for some kiting or potentially outright die depending on the content.

This skill is necessary since unlike our Blighted Rounds brethren, we can’t apply toxic through our gun at all. Which is fine, the combination of this skill and our melee with the proper class node are more than enough to keep the toxic around. We need this toxic for not just a centerpiece tier 2 armor mod of the build, but also for the extremely beneficial class node that applies vulnerability.

Pain Launcher’s main draw is that it will help you burst down elites much faster than anything else in our arsenal. On top of that, your anomaly power will be stacking so high through your minigun that it isn’t uncommon to see rockets from this skill all hitting for 100k+ in tier 15 expeditions. I usually always take this one.

Cryo Turret is there as an extra target to get the heat off of you, to toss behind enemy cover to force them out, and it can synergize with some class mods pretty well. I rarely take this one.

Cold Snap gets a special mention since it has an extremely burst heavy tier 3 armor mod. Unfortunately, you need the requisite legendary to get it. Honestly, I’d rather just stick to pain launcher, anyways. The CC is unneeded in this build. 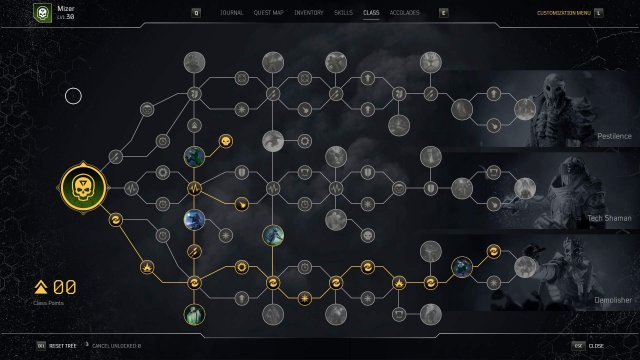 Each node is pretty self explanatory and will just clutter the guide if I write them all down, so I’ll just cover the main ones.

This is one of your bread and butter nodes. You need toxic on enemies to make use of an armor mod on top of increasing your damage. Enemies just love to charge you down constantly.

Exposing Toxin and Marked for Execution

Vulnerable makes enemies take 25% more damage. Applying it through your melee or turret is extremely easy. You can’t go wrong with this. Oh, did I mention you buff that 25% by another 40%?

This game is perfect. And because it is perfect, let me explain why I am not taking Adrenalizing Antenna or Tech Bond. /s Put simply, they don’t seem to play nice with the Armor Mod that is the biggest draw to even play this build. I am unsure of how buff stacking works. You wouldn’t think there is a problem with it, but all three buffs use the same symbol on your buff bar so it’s very hard to tell. Move things around in the build to fit them in if you want, but I’ve had very inconsistent results on keeping my armor mod active with either and both of these class nodes in the build.

None. The build isn’t focused on them, and if you’re forced to use them, then the anomaly buff of the armor mod broke or you ran yourself out of ammo on the Minigun. In the case that these happen, I highly recommend burst damage based weapon mods like Ultimate Storm Whip on an assault variant gun.

No legendaries needed. Technically, this build only needs 3 mods to make it work. And is therefore even blue gear friendly (and also very friendly to level up with and advance through expeditions with).

The primary mod of the entire build. No cap to the stack limit means this will quickly get you hitting for some extremely high numbers in dense mob arenas.

The mod that lets you be near invincible. Just keep your armor upgraded to your world tier or expedition tier and it builds up right along with you.

It is a tier 2 mod, so if you don’t have it, don’t fret. The build still works just fine without it for a very long while. Just because you have a minigun doesn’t mean you need to keep your finger held on the trigger. Many enemies will only need 1-2 bullets when you’re sitting on plenty of stacks of Massacre.

Useful Mods: (Add these in as you unlock them)

Bigger mag means less downtime early on and after you have Toxic Rounds, it means less chance to accidentally run out of ammo.

One of the more forgettable mods of the build. If you chance upon toxic lead and are upgrading through expeditions using blues so you don’t get the huge titanium and drop pod resource hit. This would be the mod to drop.

It is a substantial difference in damage with and without this mod. However, when you get the Massacre mod rolling, you may find you don’t need this one as much. I keep it in the build, regardless.

Yes, I listed all but one of the tier 1 Minigun mods. It’s a solid build. Other mods to look out for when you start gearing more in purples and legendaries would be any that give % damage. % damage vs. frozen enemies, % damage vs. elite enemies. Other anomaly buff based armor mods could work, just be wary they may cause issues with Massacre.

This build has 2 problems:

Outside of those problems, it’s a pretty relaxed style of play. Most of the time I’m just trundling forward through mass waves of enemies mowing them all down while they hardly do anything to me. I’ve hit rank 15 in both World Tier and Expeditions using this exact build. And I can get gold on a few of the expeditions every time.

The Only Damage Source You Need after New Horizon Update / Comfort for All Classes That’s all. Everything else, go full defense / build whatever you want, you don’t even […]

A very simple, easy guide to some of the game’s basic gameplay patterns and how one may improve themselves accordingly or discover new, viable ways to embark on their journey […]