How best to prepare for the Marion Reform, and how to manipulate the AI to your benefit.

Before we start, you should know we will be playing as the Scipio Faction, as they have the best starting position for this tactic.

Basic Information about the Marion Reform

Now that we’ve gotten that out of the way, let’s prepare for our invasion of Rome.

As stated before, we’ll be playing as the Scipio Faction. The Scipio’s have the best early game set up, and are in the perfect position for World Conquest.

Our two allies, The Julii and The Brutii, are actually our greatest enemies. We can’t attack them right now, but we can make them stagnate. Here’s how it works:

The AI will only siege another city that directly borders its own. What this means is, we can prevent our two greatest allies from becoming our worst nightmares. We just have to be quick about it. 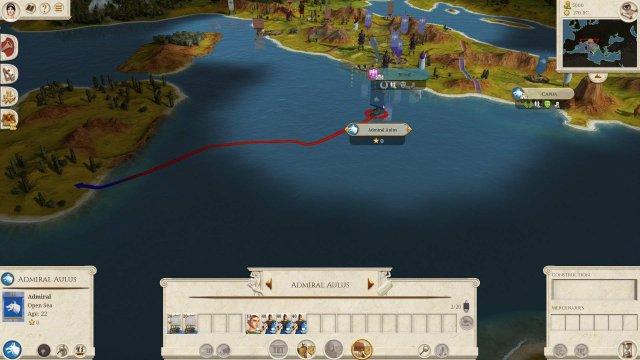 We’ve got no time to lose. Pick up Gaius, and all three of the Hastati in the area. Stick them on a boat, and sail immediately for the island to the West, Caralis. If you don’t start sailing here on Turn 1, the Julii will take it instead, throwing a huge wrench in our plan. Recruit more Hastati in Capua, and build a Shrine to Neptune here.

Meanwhile, send the rest of your men to take Syracuse. It shouldn’t be difficult to take, but hire a Merc if you need.

As soon as Gaius reaches Caralis, send him in. The city has no defenses, and can be taken out quick. Hire a merc or two, leave them behind, and take Gaius and the Hastati near Lilybaeum. Have them meet up with your men who took Syracuse, and take the city fast. 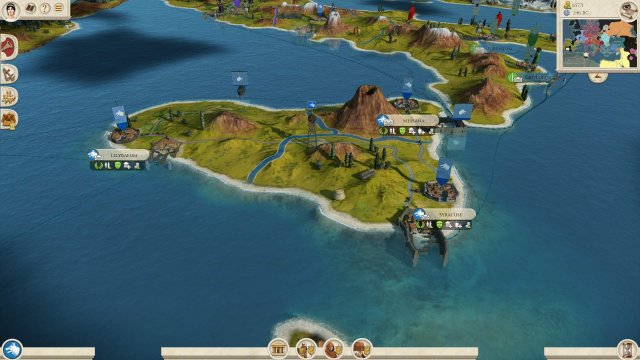 This is our Base of Operations. Our Troop factory, if you will. You will want to dedicate each city to producing one type of units. Here’s how I do it:

After you’ve taken the island of Sicily, the Senate is going to want you to continue your war with Carthage. Instead, recruit a Diplomat, and request a Ceasefire. Sweeten the deal with Trade Rights if you need too. Carthage is a quagmire, and it’s only going to slow us down right now.

Instead, gather as many Hastati and Equites as you can, and take Gaius East. We’re taking over Greece.

Athens – The City of Gold

As soon as you land on the shores of Greece, siege and take Sparta. It shouldn’t be well defended, as The Greeks will be trying to fight off the Macedonian invasion. After you’ve taken Sparta, leave a skeletal force to hold it, and head straight for Corinth.

Once you’ve taken Corinth, you’ll have The Statue of Zeus, giving you +4 Loyalty in all Settlements.

But the greatest prize to be had here, is Athens. Athens, when fully upgraded, makes the most money of any city in the game, by far. It can easily exceed 10k per turn, so take it early.

As soon as you take a city, make sure to destroy its Temple, and replace it with either a Temple of Saturn or a Temple of Neptune, if its on the coast. 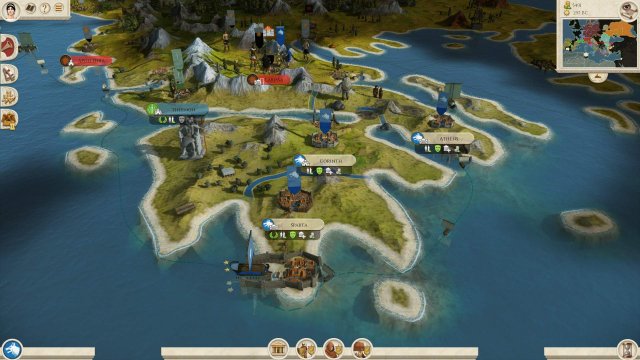 When taking these cities, make sure not to enslave to many of them. Overpopulation in cities can lead to Civil revolts, so make sure to take the exterminate option most of the time. The money doesn’t hurt either, and will go to fueling our war campaign. There will never be a reason to Occupy a city.

Make sure your Troop Island is producing footmen, archers, and horses. Ferry them over to Greece when you have the chance, and help them reinforce your new holds. Make sure Sparta and Corinth are producing units as well, because we’re far from done.

Send a small force, of maybe 4 or 5 units to Kydonia, and take it from the rebels. They won’t pose a threat (You don’t even need to build walls here. No one will ever attack Kydonia for some reason). 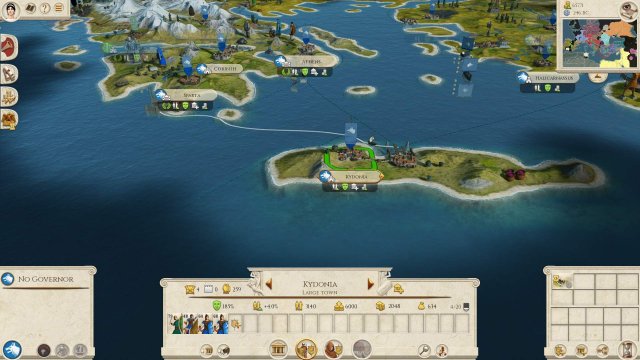 By this time, the Brutii may have taken Thermon, but that’s fine. Take Larissa, and Thessalonica. This should be enough to cut off the Brutii’s advance any further. If the Julii are on track, they should have Salona. Take Blyzora, and the Brutii are stuck, and will not be able to progress any further. 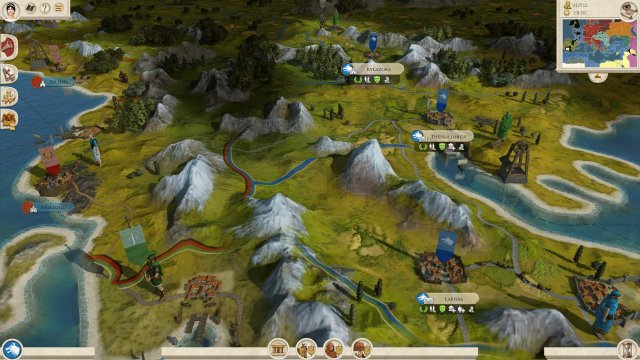 When The Brutii become your enemy, they’ll only have three or four cities to their name, and you’ll be ready.

By now, you should have a pretty sizable army, and Gaius should be proving himself to be a legend.

Now that we’ve secured our position, send a diplomat to Thrace, if they haven’t sent one to you. Accept or Offer them an Alliance. They will expand North, and our friends the Julii won’t bother them for now.

Send Gaius and his men to Halicarnassus, and secure the Mausoleum. Have an army ferry over to Rhodes, and put down the Greeks once and for all. Massacre the populous, and invest in new recruits. 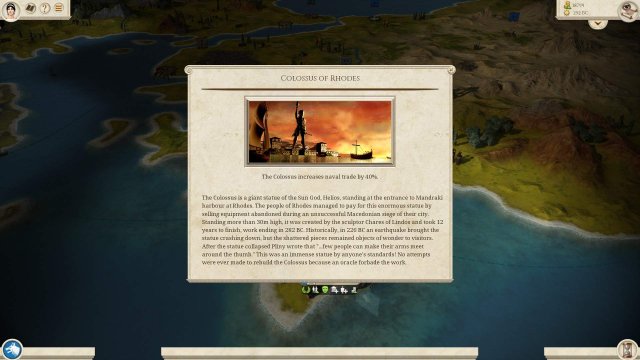 This is where the real money starts rolling in. With Greece, Kydonia, and the Turkish coast under your control, your naval trade will start to skyrocket. But why stop there? Have Gaius and his men take out the Pontics in the region. Try and avoid a war with Egypt right now. 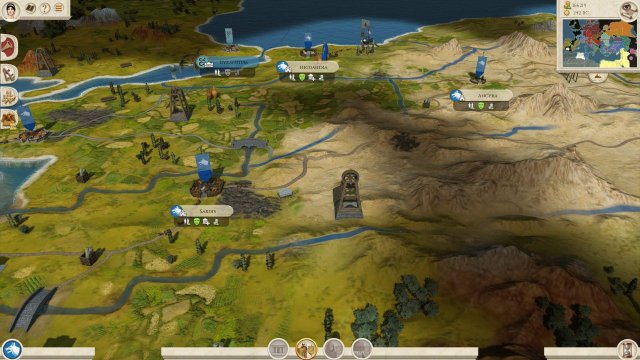 Once you begin to spread you Empire out from here, it is highly recommended that you move your capitol from Capua to Athens. Being near the capitol has a positive effect a on a lot of cities, and Athens should be the center of your empire anyway. Time to make it official.

If you’ve kept up on your Troop factory, now is a great time to finally get the Senate off of your back about Carthage. If you’ve kept your Ceasefire with Carthage, they will most likely have left to fight Numidia and deal with their horrible situation in Spain. Carthage and Thapsus should be easy to take if they aren’t expecting a fight. 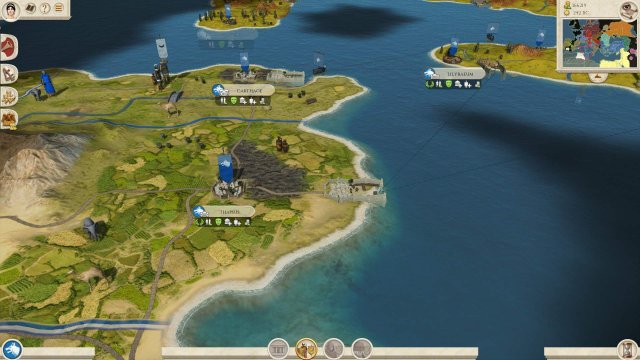 From Carthage, take a boat and sail a small force to Palma, just to make sure the Julii can’t use it for their own purposes.

Now take your armies of Roman Steel, and spread them East and West at the same time. Take out Pontus, but try and ignore Armenia. Feel free to attack Egypt after you’ve dealt with Pontus, but keep in mind the Marion Reform is drawing ever closer. We need to begin to turn out sights inward. 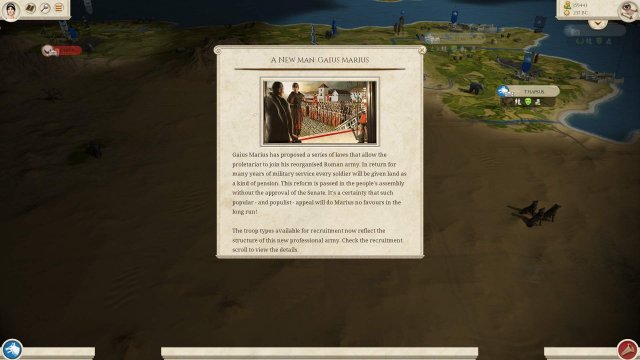 You will more than likely be able to build a Royal Palace before either of the other factions can. However, do not build it. Once the project is complete, you will institute the Marion Reform, and begin the next stage of the game.

Eventually, you will have to build it as your city gets more and more people, but you can put that off for a while before the civil unrest starts. There are two reasons you do not want to build a Royal Palace right away. 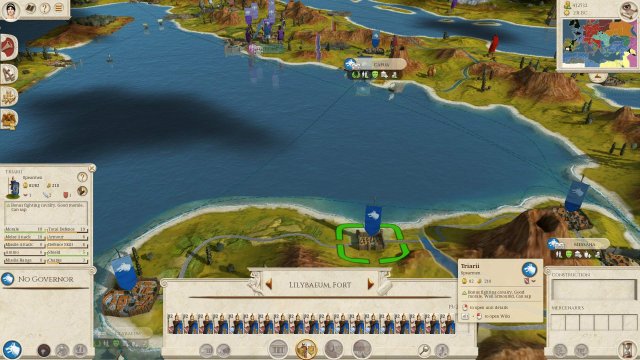 Now that the Marion Reform is here, we need to be prepared to war against our allies. Recruit as many armies as you see fit, and begin placing them around the Brutii cities of Croton and Tarentum. They shouldn’t be well defended.

Take your main force, and place them near Capua. As soon as you’re ready, launch an attack on Rome. You should have a sizable advantage, as Rome cannot produce the newer Marion units as quickly as you. Take the city, and the Civil War begins.

Seige Tarentum and Croton, and whatever territory they managed to get on the Greek coast. If you were successful in cutting them off earlier, then congratulations, that should be the end of them.

The Julii have no doubt expanded North at this point, dedicating most of their armies to fighting Briton and Germania. Use your surprise attack on Rome to swallow up the rest of Italy. The Julii will be forced further and further North, while you can take your time expanding in whichever direction you see fit. 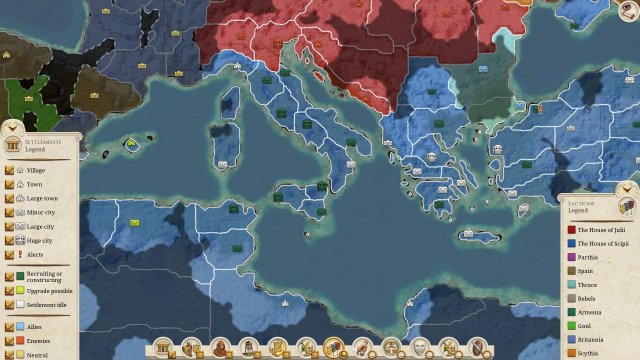 From here, it’s all a matter of patience. The Julii are entrenched North, but they shouldn’t pose a serious threat. You’ve already won, they just don’t know it yet.

Here’s a handful of tips to help you along the way.

Keep your cities building, and it’ll keep most of them happy. In turn, most of your cities will start turning profits the more you trade with yourself and other factions.

Important note: When A Man Of The Hour is selected, you must accept it immediately from your “Alerts” Tab. If you move the Army who got the Man of the Hour award, and then go to accept him as a new general, it will fail and tell you the man is already dead. Be careful.

In this guide, I share a map of all the Base Farming Levels of all the settlements in the game and explain how you can use it to access late […]