A quick and easy guide to Mercenaries in Rome Total War.

Mercenaries are an effective, yet expensive unit type, that can make or break your army.

But not all Mercenaries are created equal. Some of them are better than your base units, while others are not worth your time.

Some Important Notes About Mercenaries

Side Note: I used screenshots from the Original Rome, as the Remastered Version only gives you a tiny corner to look over your units.

With that out of the way, let’s get to the tier list.

The Best of the Best. Description: The absolute best Missile in the entire game. The Cretan Archer is not only stronger than your end game Archers, but they have incredible range and accuracy to back it up. Recruit these Mercs whenever you can.

This Tier is reserved for units that are incredibly useful, but hold some drawbacks. When used effectively, these Mercenaries can make all the difference. 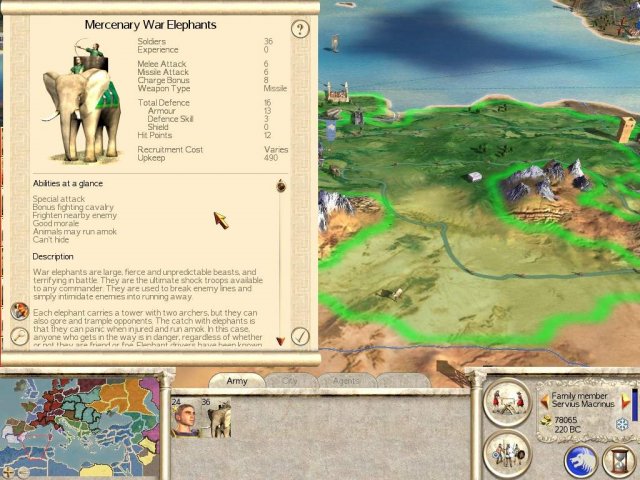 Description: The most elusive, yet easily the most destructive Mercenary in the game. Elephants are awesome. If your Elephants get the jump on infantry, they will knock them over like bowling pins. As if that wasn’t enough, Elephants are actually Ranged Units as well, and will fire arrows like Missile Cavalry.

What’s more, Elephants can actually knock down Wooden Walls, and bash in gates of cities. They are living Rams. Though this is not recommended for Large Walls, as the oil will run them amok.

Speaking of, all Elephants come with one major drawback. Elephants are easily scared, and will berserk if frightened. They will attack anything in their way when panicked, especially your own troops. Fire Arrows can scare Elephants before they even get close, and can wipe out your entire army if you aren’t careful. Additionally, Elephants do poorly in cities and small enclosed areas. Use them at your own risk. 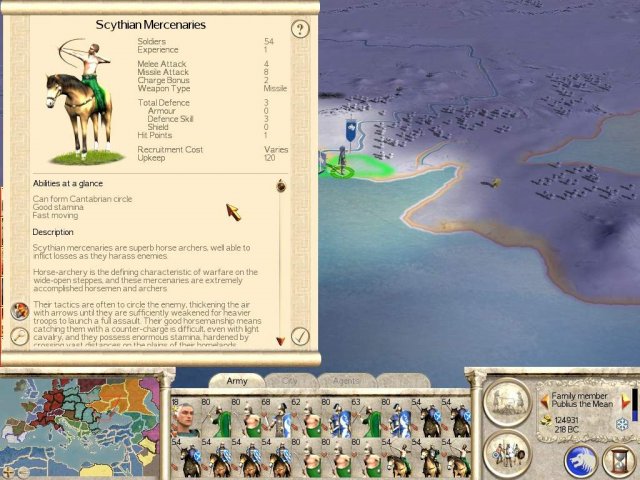 Description: These Mounted Horse Archers are the best Missile Cavalry Unit Rome can recruit. This might be the only Mercenary Unit you could viably make an entire army out of. Horse Archers can pick off your enemy at a distance, and are not easy to catch. Keep them out of range of enemy Cavalry, and they can be an excellent addition to your army. Description: My original impulse was to place these guys in B tier, as their effectiveness drops off by late game. However, they are the only Phalanx Spearmen Rome can recruit, and can be absolutely deadly to a Chariot charge. Hoplites work best against Egypt, Macedonia, and Scythia, as they seem to have the most Mounted Cavalry Units in the game.

Hoplites can also be very effective in cities. Place a few of them at the front line while taking a city. The computer is very likely to try and run its cavalry down the narrow streets. They are perfect for engaging an enemy, and having one of your better units flank the enemy from behind. At the very worst, they are effective meat shields. 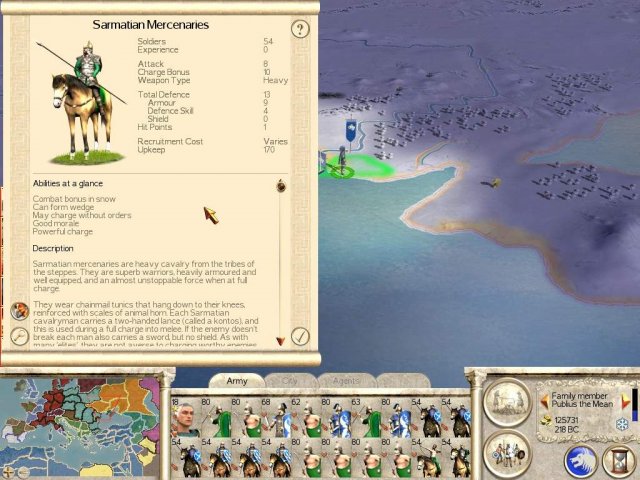 Description: Sarmatian’s are the only Heavy Cavalry Mercenary Unit in the game. Their attack is decent enough, but they also come with a 10 point charge bonus. Heavy Cavalry is always good to have, and these Mercenaries make very effective additions to your own.

These Mercenaries are decent enough, and can help in a pinch. These Units can be effective when used right, but can come with some pretty serious drawbacks. 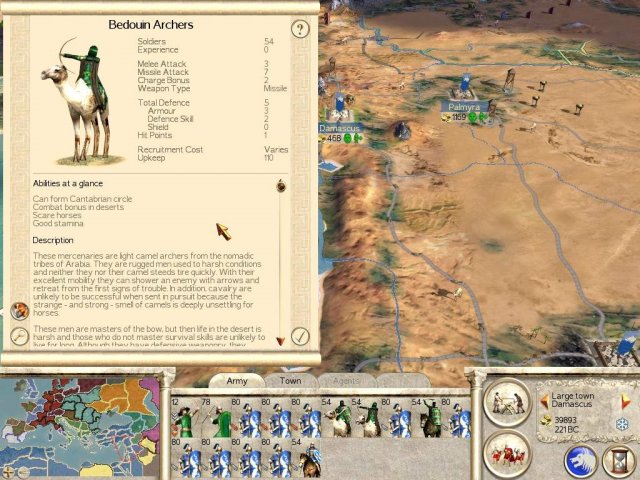 Description: Bedouin Archers are Camel Riders, and as such, have the passive ability to scare horses. Enemy Cavalry can lose morale around Camels, but these archers typically don’t get close enough for that to happen. Still, they are very effective Mounted Missile Cavalry, outclassed only by Scythian Mercenaries. 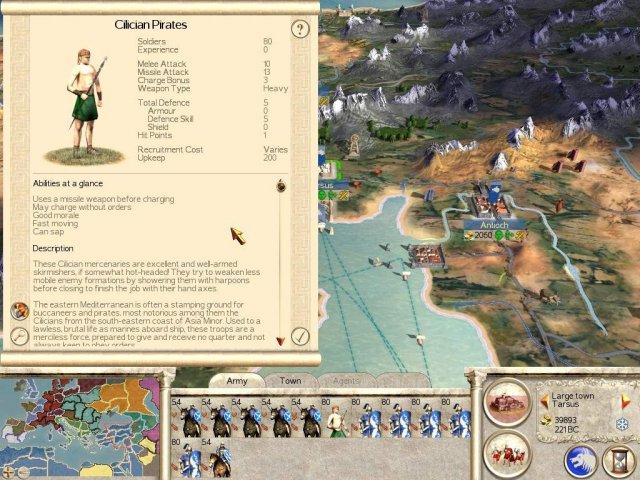 Description: These Pirates might be one of the stranger units in the game. They are very fast, and fire off a missile before they charge. If they charge an already engaged enemy, they will rip through them. Just don’t count on them to hold a line, especially against cavalry. They are pretty cheap compared to most mercenaries, and pack a solid punch. 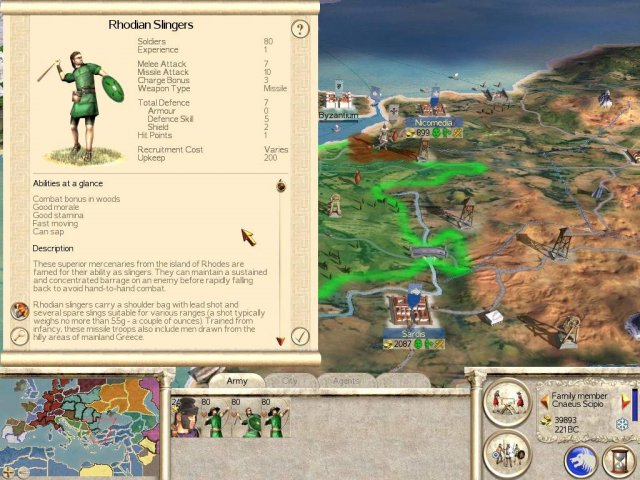 Description: I know, I was surprised too. Rhodian Slingers actually pack a solid punch, but lack any real range to use this effectively. That being said, they are excellent on Large Walls for Defensive Sieges.

Rhodian Slingers also come with a surprising amount of durability. They have their own shields, and while they are by no means melee fighters, their defense can keep them from being annihilated when engaged. Don’t sleep on the Rhodian Slingers. They can, and will, surprise you.

Warning: Slingers fire in a straight line, not in an arc. If you position your Slingers like Archers, they will kill your own Troops. Use caution. 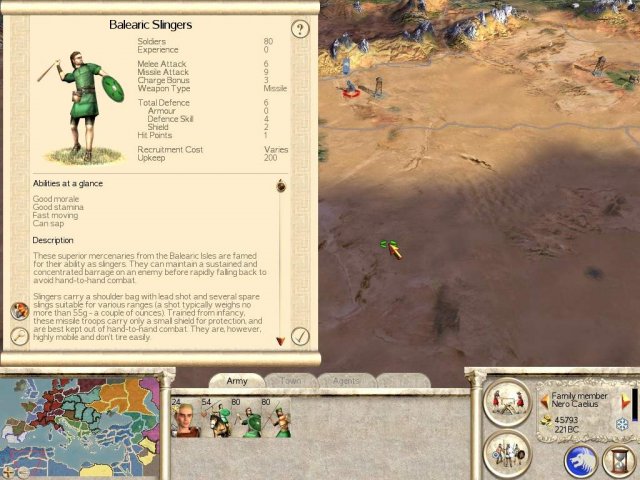 Warning: Just like Rhodians, Balearic Slingers will fire in a straight line. Do not use them like Archers.

Any Mercenary ranked at C or below is generally only fit for garrison duty. These units aren’t very special, and aren’t generally worth the money otherwise. Description: Thracian Mercenaries can do a large amount of damage very quickly. However, they break even quicker, and can’t stand up to most infantry or cavalry. They can use the ability Warcry, which boosts their attack for a short time. You cannot use this ability while already in combat, however, so timing is everything. 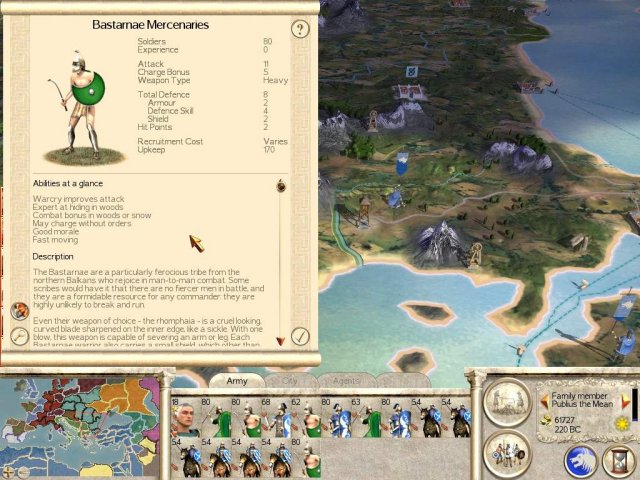 Description: Bastarnae Mercenaries are almost identical to Thracian Mercenaries, with two exceptions. Bastarnae’s have double the health of their Thracian counterparts, and extra morale to boot. Bastarnae are the superior version of the Thracian Mercenary, but are about just as useful. They are quite expensive, so use them only if you really need some extra infantry. Description: Barbarian Cavalry are honestly not good for much. They can help reinforce your cavalry charges, but that’s about it. They become obsolete very quickly, and are best used to scout out the map in advance of your army. They are very cheap however, so they are a fantastic option as a garrison unit. Description: Spanish Mercenaries are basically discount Legionaries. They fire a missile before they charge, and can take a hit from lesser units. These Units aren’t bad, but they aren’t great. They can help bolster your Infantry if needed, or flank an engaged enemy. Otherwise, these mercenaries make decent garrison troops.

This is where things start to get really bad. These units all basically serve the purpose of artificially bolstering your ranks. They’re not great. 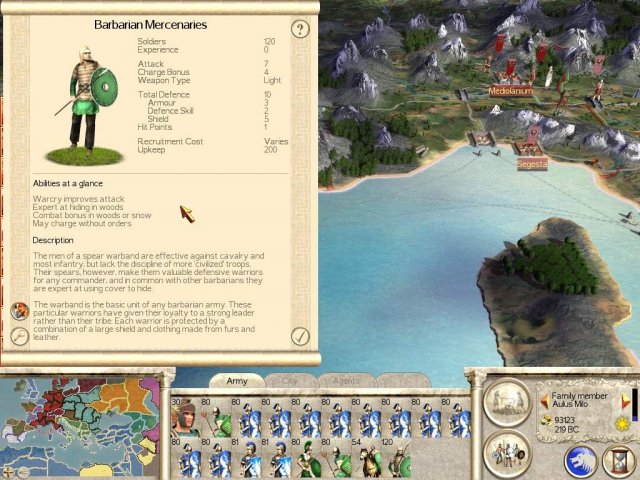 Description: These mercenaries are terrible. Their only saving grace, is that there is a lot of them. They come in bigger numbers than most other mercenaries, but this doesn’t help them on the battlefield. They’re numbers can create an effective meat-shield in a Siege Defense, but you can also disperse them inside your cities for a small population boost. That’s probably their best use honestly. 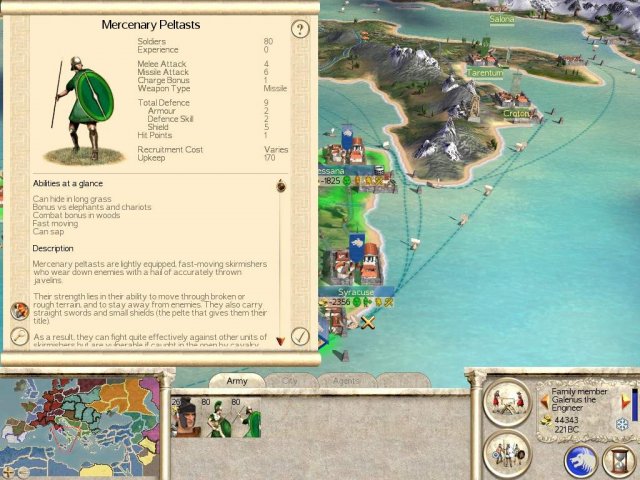 Description: These units are pretty pathetic. They have a bonus against Elephants and Chariots, but their range keeps them from being effective. They can be used to defend cities, until they run out of ammunition. They’re pretty much dead after that. Description: A slightly upgraded version of the Mercenary Peltast. They have slightly better attack, but nothing else to offer. They also do bonus damage to Elephants and Chariots, for what it’s worth. Not a bad garrison troop if you’re expecting a siege, but not enough to turn the tide. 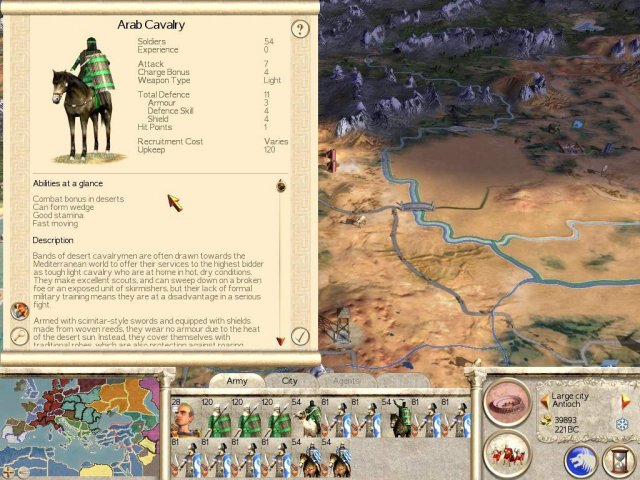 Description: One of, if not these most, useless Cavalry Unit in the game. Arab Cavalry doesn’t offer much, and can’t stand prolonged fights. They are honestly more trouble then they are worth. The only reason they don’t make E Tier, is because they are Cavalry, and can add to a larger Cavalry Charge. Not recommended overall, especially not for the price.

Bottom of the barrel. These Units are barely fit to garrison a city. They are warm bodies, and nothing else. Description: Samnite Mercenaries are Spearmen in name only. They have a natural bonus against Cavalry, but you’d never know it. These units fall pretty hard, pretty quickly. Even though Spearmen are rare in Rome, these are not worth your time. 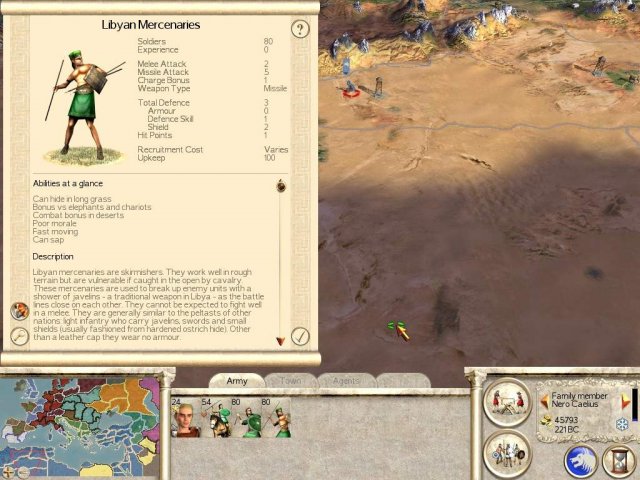 Description: These Missile Units are abysmal. They are weak, they can’t take a hit, they have almost no morale, and they run out of ammo fast. Their only benefit, is that they are fast. Don’t bother, unless you really need some bodies. They’re cheap for a reason. 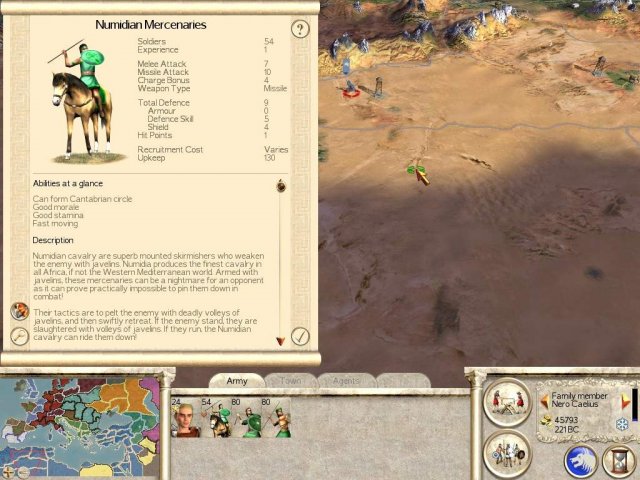 Description: Pathetic Missile Cavalry. They have weak attack, and limited ammo. You can use them to distract a group of enemies of two, but that’s about it. They would be useful to sacrifice, but they aren’t worth the cost. 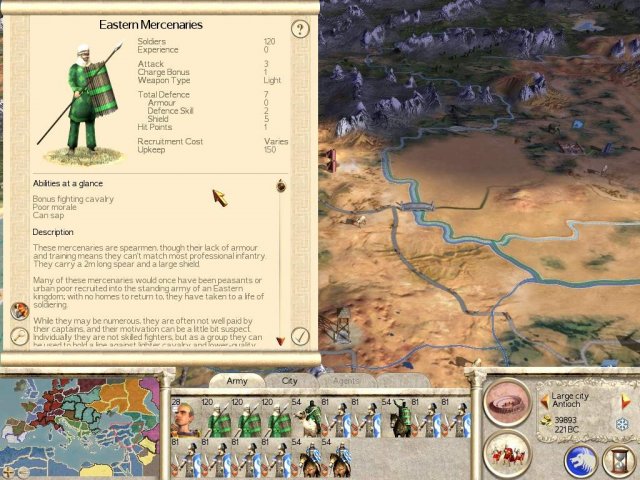 Description: One of the worst Units in the entire game. These Spearmen can be decimated by a full on Cavalry Charge, if that tells you anything. They have no attack, no defense, and no morale. They will disappoint you 100% of the time. You can use them to garrison cities or to increase your population. Other than that, don’t even bother. You’re better off training Peasants.

Extra Tips and Tricks regarding Mercenaries

Total War: Rome Remastered – How to Unlock All Factions, Tweak and Configure the Game