Ranking of all the items in Risk of Rain 2, including commons, uncommons, legendaries, and actives (plus advice!).

This guide is organized by way of quality, so white items will have their own list, so will green, red, etc. This is because S TIER would be dominated by red items only if they were all in one category. Plus, the higher quality items are obviously better than the lower quality items.

Furthermore, certain items are especially good on certain characters. This will be notated under the description of the item if so.

These are the items you really want to fish for on any character. They all stack very well, so if you come across a 3D Printer with one of these, don’t be afraid to grab a few extra.

You should be happy to get these items, but don’t go too far out of your way.

These are the items you really want to fish for on any character. They all stack very well, so be very glad if you get more than one!

You should be happy to get these items, but don’t go too far out of your way.

All of the reds are pretty great. Some are better than others! But you should be happy to get any of these.

These are the top tier legendaries that can really make your run.

Not all actives were created equal! Actives obviously become more potent when you have more than one charge of them.

These are the top tier actives that can really help out your run. The more charges you have of these, the better. 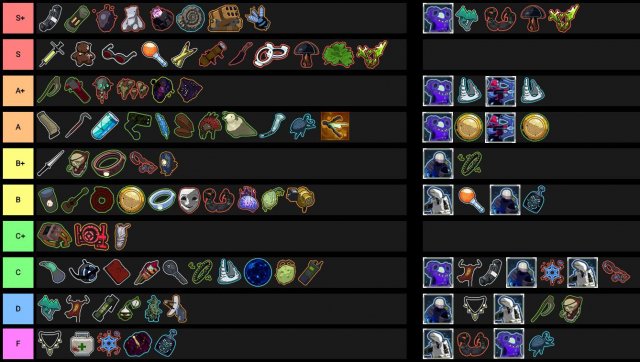 Risk of Rain 2 – How to Find Teleporters

You can’t find teleporters? I also struggled first time, spent 10 mins per stages to find one so here I will share the tips. Other Risk of Rain 2 Guides: […]

Showing locations and pattern inputs for Risk of Rain 2 artifacts. ContentsHow to UnlockSpiteCommandHonorEnigmaChaosGlassDissonanceEvolutionMetamorphosisSacrificeVengeanceKinSwarmsDeathFrailtySoul How to Unlock In order to unlock the artifact, you will have to complete a challenge […]

Risk of Rain 2 – Altar of Gold, Gilded Coast and the Aurelionite

A guide that will talk about the Altar of Gold, what it is, the area it unlocks and the boss within. Other Risk of Rain 2 Guides: Beginner’s Guide (Tips […]