Pronounced “YAHT-soo-no-kah-mee.” Yatsu-no-kami is a serpent god with a horn made of countless blades protruding from its forehead. These blades can be shot like arrows at the yokai’snn foes. Under the influence of the Dark Realm, its snakelike arms gain sentience and psing forth from its body to join the fight. Take heed when its white body turns black, for this is a sign that it is about to call forth the Dark Realm. 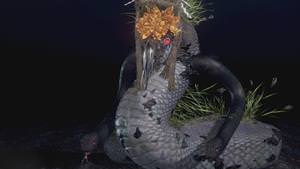 While it is now called a god, Yatsu-no-kami was originally a guardian deity to humans who were in pursuit of certain goals. It is said that many Yatsu-no-kami once thrived in the wetlands, until a man named Matachi of the Yahazu clan attempted to cultivate their land. The yokai stood in his way, and were driven from those lands as a result. Matachi planted a stake in the ground and declared it a border between the realm of the humans and the yokai. He then built a shrine so as to appease the yokai and avoid their wrath.

It’s good to have a long reaching weapon for this fight, preferably one that has an overhead vertical attack of some kind so that you can strike the head and arms easily.

When the fight starts the snake will charge you immediately, step to the side and try to sever one arm with a vertical attack or two, and then the other arm if you can. It’s hard to get both arms, but you can usually get one at least. Then be prepared to Block any attacks he may do and dodge if he tries to grab you.

Next you want to try to bait his orange attacks so you can get some free hits, making sure to Block if he tail swipes and dodge if he grabs. There are few openings where you can attack safely and still have Ki to Block, so stay patient and look for the openings.

When you go to the Dark Realm you’ll want to dodge him as much as you can, and avoid the small snakes if you didn’t sever both arms. You don’t need to focus on them and they rarely do anything noteworthy, so try to stick to the Boss and avoid getting killed.

While it’s generally a good idea to play defensively in this phase, and you should, you can still get some opportunities to attack now and then if you pay attention. Punish his mistakes, and get in shots when he does his orange attacks in this phase if you can.

When you return to normal mode, it’s business as usual, but he will summon new arms shortly afterwards. Again try to sever these when you get openings, but don’t be too aggressive. Rinse and repeat, Blocking all attacks but the grab, and punishing the openings made by the orange attacks.