A quick and dirty overview of Bardin’s weapons and talents, explaining their strengths and weaknesses to help you make your own builds.

I’ve played Vermintide 2 for near on 300 hours, all of which have been spent on Bardin (to be fair, I tried Kruber once. Didn’t like it, camera was too far off the ground.) I put this together to help intermediate players understand the roles of different weapons and talents, to help you make your own builds. This is all based on my personal experience with the game, and I won’t be breaking out any spreadsheets. This guide does not contain any specific builds or detailed information on breakpoints and optimal stats, just a quick overview so you can easily look up how different weapons and talents play in practice.

The greataxe has great alpha damage and damage output against single targets, and is excellent for both elites and monsters. That said, it’s slow, has poor dodge, and struggles against hordes. Slayer can make great use of it thanks to getting a second melee to deal with hordes, but on other classes you’ll probably want either a versatile or anti-horde melee weapon.

The one-handed axe is a faster and more versatile alternative to the greataxe. It has slightly worse alpha damage and damage output, but far better dodge and speed. It can fill the same role of killing elites/monsters while also being usable against hordes, assuming you stack attack speed.

Dual axes have very high attack speed, damage output, and dodge, but lack cleave, stagger, and block. It’s good for killing monsters and unarmored elites, but struggles with hordes and armor. Hard to use, but a good option in combination with another melee weapon.

Axe and shield is Bardin’s safest weapon by far. It has immense block, amazing crowd control, and farms THP at an insane rate. It fares well against all targets, but kills slowly and suffers from poor dodge. Kill speed isn’t much of an issue until Cata, so it’s a little overpowered for Legend and below. For Cata, axe and shield means your melee is purely for crowd control, and you’ll need to rely on your ranged weapons and/or your teammates to deal damage.

Hammer and shield is mostly the same as axe and shield, except it kills hordes slightly faster at the expense of worse single target damage. I would argue the versatility of axe and shield makes it a better option for most situations, but hammer and shield can be good on Ranger if you actively use your ranged weapon to kill elites/monsters.

The one-handed hammer is a quick and versatile weapon. A lot of players consider it a very good defensive weapon, but I find that it performs poorly in all situations. Very much a jack-of-all-trades situation.

The greathammer has great single target damage against armor, and its high stagger allows it to keep hordes at bay if needed. Being a two-hander, it’s slow and has poor dodge, so it’s still not a great choice for killing hordes.

Dual hammers are by far Bardin’s best weapon for killing hordes. They have high stagger, good dodge, and their combination of high stagger cleave, wide arc, and good attack speed means you’re essentially putting up a wall in front of yourself that only very dense hordes and break through. It’s very safe and still pretty killy, and has decent alpha damage against armor to boot. Its single target damage output is lacking and it doesn’t have the best block, but it’s hard to go wrong with dual hammers.

The war pick is an extreme one trick pony. Its easy to land headshots, and heavy attacks deal tremendous alpha damage, but that’s the one thing this weapon does. Apart from the alpha damage, the damage output is horrendous, the attack speed is slow, it’s got very little cleave, poor dodge, and so on. The only class that can really make use of the war pick is Slayer, who can take a fast horde killing weapon to complement it and/or stack Trophy Hunter, Skullsplitter, and Smiter to reach further one-hit breakpoints. Even then you’d be devoting most of your build to a gimmick, and it could be argued you’d be better off not being such a weirdy and just using an axe. With the release of the Engineer came the coghammer, which has almost as high alpha damage with its heavy attacks, but whose light attacks are wide and stagger well, making it a much more versatile weapon with largely the same function.

The crossbow used to be the meta ranged weapon for Bardin, but has faded into obscurity after it got nerfed and the hangun got buffed. The crossbow has a lot of ammo, pierces enemies, and reloads fast, giving it a pretty decent fire rate. It’s also pretty accurate from the hip, but can become pinpoint if you spend a quick moment ADSing. Back when it could reliably bodyshot specials and elites, there was literally no downside to it. Now it’s got less damage, meaning in order to pull off one-shots you’re gonna need to go for headshots, which can be tough given that it’s a physical projectile with travel time, and a bit of drop over range. If you’re able to consistently headshot with it, it’s an amazing weapon, but in the heat of battle you’re usually better off with something that’s easier to use.

The handgun is the new meta ranged weapon, able to one-shot bodyshot most specials. With the right properties and Enhanced Power you can one-shot all important specials with a bodyshot, and one-shot the rest with a headshot. Even without power stacking, some careful aim still nets you a one-shot so long as you’re able to take headshots. It’s got a lot of ammo, and reloads reasonably quickly. The only real downside is that it’s very inaccurate when firing from the hip, and it demands that you spend some time ADSing to make proper use of it.

The masterwork pistol is like a smaller, more gimmicky handgun. In theory it does the same damage, but at range it’s slower, less accurate and has hefty damage falloff over range. At close range you can fan the hammer and spam out six incredibly inaccurate shots. It’s a good weapon for killing patrols, and it’s got high monster damage if you’re willing to throw out most of your ammo, but it’s not as reliable for dealing with specials as the handgun.

The grudge-raker is okay at killing hordes, and can take out unarmored specials at close range with one or two shots. I’ve always found it underwhelming, since you can kill hordes in melee far more safely and almost as quickly. Now that Engineer is out, the minigun really blows this thing out of the water.

Drakefire pistols are a jack-of-all-trades weapon with okay range, okay accuracy, okay damage, and so on. It’s decent against both specials and hordes, and doesn’t rely on ammo.

The drakegun literally melts hordes at close range, but it’s a very risky weapon, and leaves you with no way to kill specials – or anything else, for that matter – at range. Engineer can make up for this with Gromril-Plates Shots, but even then you’re probably better off using the regular minigun for hordes and your ranged weapon for sniping specials.

Ranger Veteran has always been a somewhat underwhelming career, and the release of Outcast Engineer made it virtually obsolete. The only thing Ranger brings to the table that other careers don’t is a bit of team utility in the form of ammo pickups and some buffs to attack speed and THP. 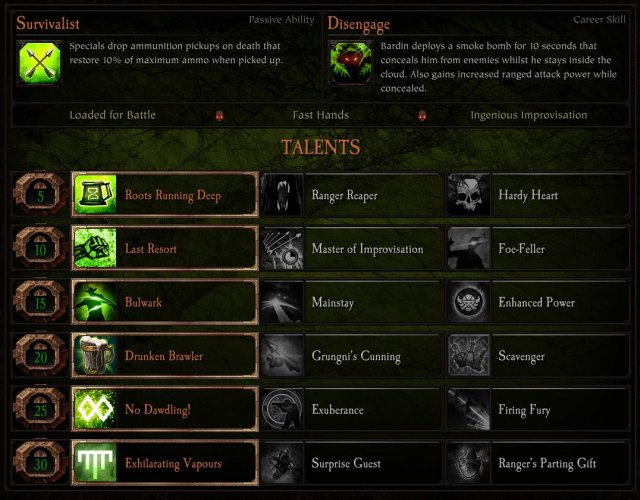 Ironbreaker is easily Bardin’s tankiest career. Gromril Armor allows you to ignore a hit every 20 seconds, which in practice means it will eat up almost all damage you take. Even when your Gromril is down, you still have a flat 30% damage reduction, and your ult, reducing your damage by a further 50%. Thanks to your incredible ability to shrug off damage, THP generation becomes less important, letting you safely take Barkskin instead of Boon, making you very hard to kill once down, and protecting you further against disablers and blightstorms. The only real downside to Ironbreaker is a lack of damage bonuses, but on Legend and below this doesn’t matter. 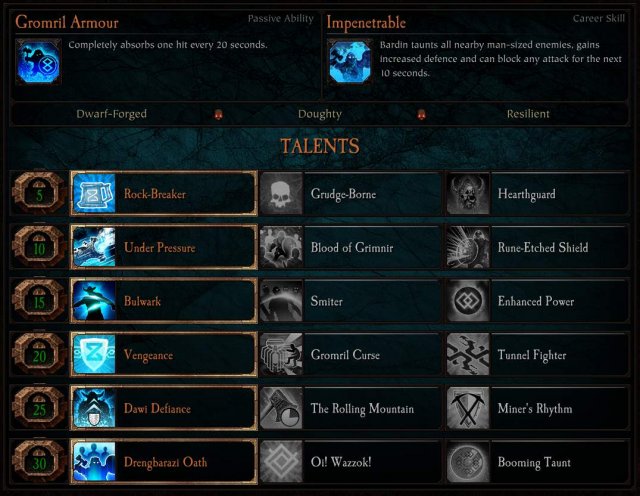 Slayer has the potential to do incredible melee damage, but his lack of versatility and range really hurts him. In order to get the most out of Slayer you need to play very risky and rely on your team to deal with any and all range, which can be rewarding but requires above average skill from both you and your teammates to pull off. 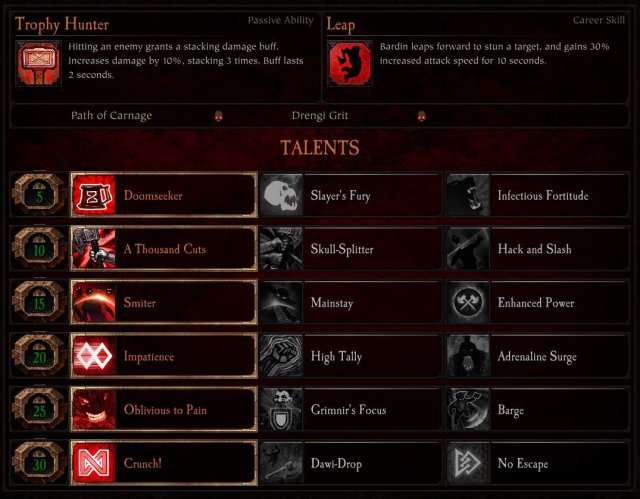 Outcast Engineer is by far the most versatile class Bardin has, if not the most versatile class in the game, period. With the right builds, Engineer is good at everything. He can deal great damage against hordes and monsters with his minigun, and kill armor, elites, and specials at range. He’s not even bad at melee. The only real downside to Engineer is how team reliant you are – most quickplay players will mindlessly run at the enemy all day every day, placing themselves firmly between your gun and what you want to shoot. I’ve even seen players who seem hell-bent on dodging into my line of fire as I try to kill the horde. My assessment? Umgak. 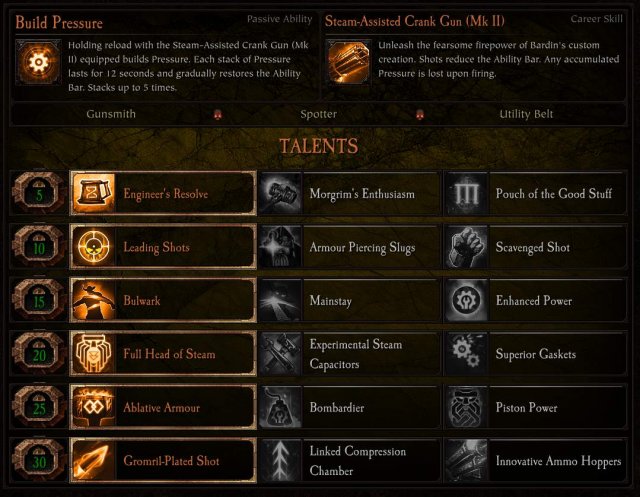 A build for clutching and soloing Legend. Other WV2 Guides: All Tomes and Grimoires (Video Guide). Advanced Guide for Progression and Leveling. Basics of Melee Combat. Sienna Guide. Legendary Ranger. […]

This is a guide on making your bots useful for higher difficulties and twitch / deeds. I used to have almost 100% completion ratio on legend / twitch / deeds […]