The Dead by Daylight Community looks down upon The Doctor. Many people consider him a D Tier killer. I would agree however, he still has potential despite him being one of the weakest killers in DbD. He is not utterly useless, but rather inconsistent. If you manage to master The Doctor, he becomes an anti-loop killer with high situational awareness and when you win, you feel most rewarded.

The Doctor is a very weak killer. Although he doesn’t have much to work with, he still has some anti-loop built into his power. The Doctor also has the ability to easily find survivors at the start of the game if you are too lazy in tracking or if you’re new, it could help you find survivor’s locations. The Doctor also has the ability to slow the game down by forcing people to snap out of Madness.

Here are some tips in playing the Doctor:

Smart an experienced players know that gimmicky builds do not work in Dead by Daylight. (For example: Anti-Healing Builds – Use Anti-Healing perks and survivors will gen rush you and you don’t have enough pressure to do anything about it.) The Doctor however, is probably the only non-M1 killer where gimmicky builds could work. However I wouldn’t recommend using a gimmick build because it’s too planned out and 9/10 times, it doesn’t work.

Here is a video that I’ve made on why gimmicky Anti-Healing Builds don’t work:

If you are in Brown-Green Ranks, the best perk combinations would be: Hex: Ruin, Pop Goes The Weasel, Barbecue & Chili, Unnerving Presence.

If you are in Purple-Red Ranks, the best perk combinations would be: Hex: Ruin, Hex: Huntresses’ Lullaby, Hex: Haunted Grounds, Pop Goes The Weasel.

Gimmicky builds don’t work, but on Doctor, they could (not will, not can, but could).

A build that relies on a Mori is not fun to play as or against since you most likely won’t pip. A decent build to try with Doctor is:

This video shows why Doctor can easily protect totems:

This totem build could work well however, if you want a gimmicky build that has Anti-Healing then try this:

The Doctor has only 4 strong addons. Everything else is decent and/or mediocre. These are the strongest addons:

Iridescent King – there are way too many requisites to this addon for me to put into my own words. I’ve taken a screenshot for you to see what this addon is capable of: 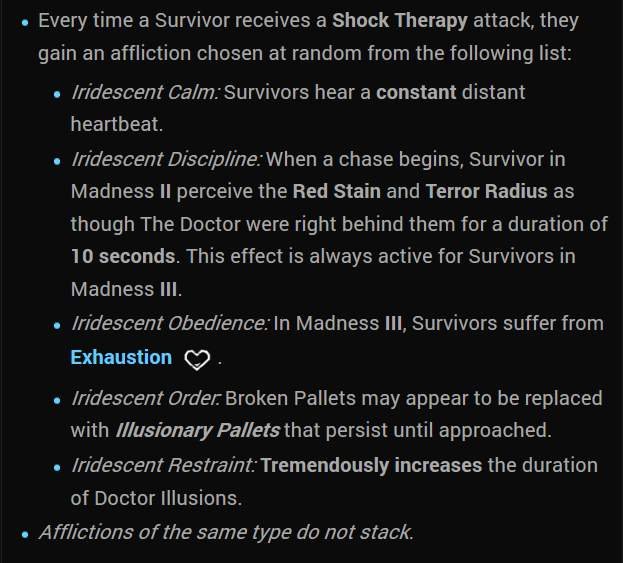 Why is Iridescent King good? There are many reasons:

This removes a survivor’s basic defense – exhaustion perks. This renders every exhaustion perk essentially useless meaning survivors cannot get greedy and if they’re injured, they’ll feed you pallets. You can also sneak up on survivors since they might not know where you’re coming from since they already can see a red stain behind them and hear a loud heartbeat. This helps Doctor with anti-loop since you don’t need to bother with hiding your red stain when mind gaming at loops.

Moldy Electrode – slightly increases the shock therapy’s charge time, but it increases the range by 25%. This Brown Addon what makes Doctor somewhat viable. Why is it better than the others? The others take way too long to charge up and you don’t need an absurd range when shocking survivors. It’s unnecessary; still good however. This addon is what gives Doctor anti-loop potential, but NOT unloopable.

Polished Electrode – moderately increases the shock therapy’s charge time, but it increases the range by 50%. You might think this is better than Moldy Electrode, but it isn’t. Shock range, though it is necessary, absurd range isn’t. Not only do you have an unnecessary “overkill” power, but you also take longer when charging your shock therapy. Shock therapy is what gives the Doctor anti-loop potential. This is still a very good addon.

High Stimulus Electrode – considerably increases the shock therapy’s charge time, but it increases the range by 75%. I will not reiterate why I feel this addon is worse than the previous one and the first one. This is still a very good addon, but not good enough for anti-loop potential.

There are only two good combinations that work against good survivors:

Moldy Electrode with Iridescent King – Moldy Electrode is used for shocking survivors before they can get to a window or a pallet in time. This covers 25% more distance than his normal power, but takes slightly longer to charge. Iridescent King is used for exhaustion on survivors and the constant red stain which makes looping a bit more difficult with survivor since mind gaming would become a lot easier since your red stain is already behind them.

High Stimulus Electrode with Polished Electrode – Though it is not good for anti-looping, it is good for protecting generators, totems, hook saves, etc. By using these two addons, you can cover less distance while traversing through the map. I wouldn’t recommend this combination over the other one since this one is limited to anti-loop capabilities.

The Doctor only has 1 excellent map that is truly Doctor orientated.

The Doctor can essentially win on any map. There is only 1 map that is awful for The Doctor:

How to Use Doctor as Anti-Loop

In these videos, I show you a visual representation of how to put Doctor to work with anti-looping. This is also on Blood Lodge; arguably the most difficult map for killers.

You could essentially block windows and vaults like that in any loop. However at Killer Shack, Doctor could become unloopable. Just make sure that you understand when to time your shock therapy; it has to be PERFECT timing.

3200+ hours competitive gamer explaining how to escape every single time as a survivor team against any type of killer no matter they are good or bad skilled. To Do […]

Playing Freddy is very simple; with both Dream Snares, Dream Pallets, and Dream Channeling. People see Freddy as a very strong killer now and there are many good perk builds […]

Make sure you claw in those items with this handy checklist and reap the benefits of the Lunar New Year in style. Unlockable through the Lurking Stripes Event (25th January […]