Spa or Hot Springs is a special and secret room that are encountered during completing missions. The spa is used by a player which grants a temporary regenerating effect that restores the player’s HP over time, it is best used before fighting bosses or strong enemies to gain a slight advantage in battle.

Spas are baths that can be used by the players to obtain temporary HP regenerating effects. You can only use the hot spring once and it can be replenished and re-used after praying at a shrine. Spas are usually secret rooms that are guarded by a Nurikabe yokai or are usually found near the mission’s objective. 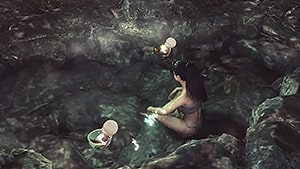 All Spa Locations in Nioh 2

Normally, there are two Spas that can be located in main missions. It is usually found near the mission’s objective before reaching the boss, or it is hidden behind a yokai that is disguised as a wall which is the Nurikabe. When you encounter a Nurikabe, you’ll hear the yokai moaning and if you approach the wall, its eyes will open. To avoid it from becoming hostile, input the right gesture for it to reveal the secret room that has a hot spring.

There’s a secret wall on the first floor of the burning Great Forge near the mission’s objective. You’ll have to taunt Nurikabe a wall Yokai for it to open up a path where you’ll find the Hot Spring.

The Spa can be found in the west inner section from the 2nd Kodama shrine. Before you reach the Spa, you’ll encounter a Gaki, Enki, and an Aberrant Soldier.

Near the third shrine from the Dark Realm where you encounter a One-eyed Oni, exit to the west path and you’ll encounter troops from the Imagawa clan, the hot spring is behind a Nurikabe yokai that’s on the left side next to a soldier that’s sitting.

The second hot spring can be found within the forest near the objective and the shortcut that leads back to the starting point. You’ll find it behind the shack.

Head to the second floor of the castle from the east entrance of the castle’s east gate. You’ll find the hot spring behind a Nurikabe Wall after the large storage room where you encounter an Aberrant Soldier before reaching the third floor.

The spa (hot spring) can be found at a section after passing a temple. It’s guarded by a One-eyed Oni and it can be found just past it and behind a shack.

It can be found behind a Nurikabe wall just before reaching the boss of this mission. After dealing with the third dark realm, go down the incline where you’ll encounter three soldiers guarding the path ahead. In the same area where the soldiers were, there’s a Nurikabe wall nearby. Kill it or pacify it with a gesture so that you can enter the room behind it where you’ll find the hot spring.

Third Shrine: For the Hot Spring, you must rotate the purple bridge and align it leading to the tower of the castle. Once that’s done, head back down the first floor and go to the room where the large spiders were. Go inside the room on the left where you’ll find a rotating panel. You’ll see a hole on the wooden floor which you can jump from to head in the secret room where you’ll also find the last kodama for this mission.

Found near the third shrine. Go to the temple near the garden and destroy the white wall to find the inner section of the temple. Just ahead of the room, there’s a Nurikabe wall, you won’t miss it. The Spa is inside the secret room behind the yokai.

Head to the section past the Nurikabe wall which can be found inside the house near the friendly NPC that joins your party. At the small house where you opened a large chest, go to the path on the right where you encounter a Rokurokubi and an axe-wielding soldier. The hot spring is just past them around the corner on the right.

The spa is located in the cave underneath the innermost section of the fort where the third shrine and last dark realm is. You won’t miss it.

2nd Shrine area: The Spa can be found inside a room where you encounter a bell that’s being guarded by a cannon-wielding soldier and an Aberrant Soldier. The room with the spa is behind the yokai enemy.

First Shrine: From the second section of the courtyard near the first shrine, go inside the bathhouse on the right near the watchtower where you’ll find the Spa.

Third Shrine: Found inside a house. To find it, when you reach the third shrine after fighting Hachisuka Koroku, head down the incline where you’ll find yourself in an open field where a giant yokai shoots projectiles at you. As you go around, about midway, there’s a door on the right that’s being guarded by a Magatsu Warrior within the mist. You must kill the yokai to obtain the Rusty Key that can open the door it was guarding. As you enter, simply head straight until you’re on the roof of a house. Simply jump into the hole where you’ll find the spa and a large yellow crystal that you can destroy.

2nd shrine The lever must be pulled to rotate the bridges. Once that’s done, go to the top, head inside the tower, go around the side and jump out from one of the doors to land on the middle bridge. From here, you’ll want to go left and you’ll find the Spa (Hot Spring) for this mission.

Second Shrine: At the garden section and after clearing the dark realm, check inside the room on the right side near the path leading to the painting of the Yatsu-no-Kami. You’ll find a Nurikabe wall yokai inside, and the room behind it leads to the basement where you’ll find the Spa and a Kodama.

Found on the left side walkway of the temple near the third shrine. You must destroy the rock first that’s found within the dark realm so that the bridge made out of roots appears and connects from the temple to the platform where the Spa is.

Found behind the soldier’s camp near the second kodama shrine and the door leading to the mini-boss of the area.

When you reach the bottom section of the cave where you’ll see a scaffolding that’s engulfed with the dark realm, check the west side and you’ll find a Nurikabe yokai wall. You’ll find the Hot Spring Chamber Key inside the small cave behind the yokai. Next, unlock the gate next to the scaffolding and then go straight and use the key to open the other gate that leads to the spa (hot spring).

It’s located at the same spot behind the shack near the boss area and the shortcut leading to the starting point of the main mission: The Mysterious One Night Castle.

The Viper and the Butterfly

From the starting point, head down the path and go up the incline that’s on the right side. Just before reaching the top, look to your left and you’ll see a Nurikabe wall. Try using the “Backflip” Gesture for it to allow you to pass without fighting. You’ll find the hot spring in the room behind the yokai.

The same area found in the main mission: A Way Out. Near the second shrine in the forest area outside the village. Kill the Mitsume Yazura yokai first to dispel the dark realm, head to its position and check behind the shack, the hot spring is behind it.

Past the second shrine, go around the narrow path towards the east side from the cliffside. You’ll reach the other side of a locked cabin and a yokai mist where you’ll encounter a Yoki. Past the yokai mist, there’s a ladder that you can climb, you’ll find the hot spring at the bottom.