I am Guardian. I have seen a lot of guides that seem to cover only the basics of the game. This guide’s goal is to teach you about everything! Hope you enjoy it.

TLDR: 4 Survivors spawn randomly and need to repair 5 power generators while avoiding getting killed by the Killer.

A list of what you can do as a survivor: 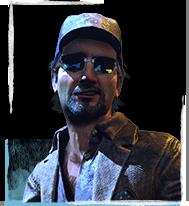 He’s a specialist in luck. His three unique perks increases his chances of getting off a hook by himself, escape from a beartrap, improves his aura reading skills and makes it easier for you to get the best items off a chest. 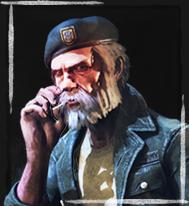 He’s a specialist on survivability. His three unique perks allows him to survive for 40 seconds after getting hit while already bleeding. In this period of time, you can heal yourself and prevent getting put into dying state, getting up from dying state by himself and make repairing fast if he’s all by himself. 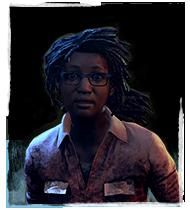 She specializes on aiding/healing. Her unique perks allows the perk user to heal himself without the need of a medkit, detect other bleeding survivors without range limits and heal faster and silently. 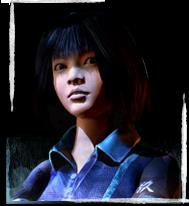 She’s more of a solo survivor. Her perks are really flexible, making her gain speed after vaulting a window or pallet(during a chase), view the killer’s if he damages a generator or destroys a wooden pallet and repairing generators way more silently. 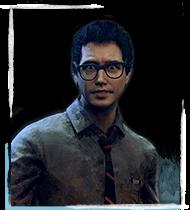 He’s a specialist on teamplay. His perks allow him to see other players near him, increase repair, sabotage and chest search if in range of other survivors. 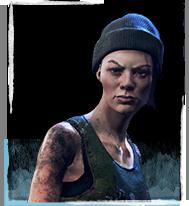 She’s a specialist on moving around the map. Her perks allow her to walk faster while crouching, increasing items duration and not to get staggered if falling off high ground. 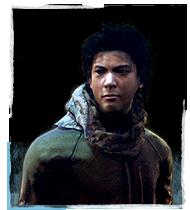 He’s specialized on sabotage. His unique perks allow him to destroy the trapper’s beartraps and killer’s hooks without having a toolbox, walk by crows without triggering them, and to be 100% silent while standing still on bleeding state. 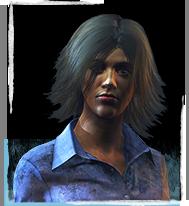 Just like Bill, she specializes in surviving. Her perks can reduce the killer’s aura reading distance, show her the location of the killer(but he’ll see her aura aswell) and escape from the killer’s grasp by hitting a skillcheck that can be triggered only once every match. 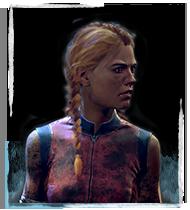 She’s specialized on escaping and running. Her perks allow her to sprint faster when starting to run, heal herself when all of the 5 generators get powered up and producing less noise while entering a locker or sprintvaulting a window. 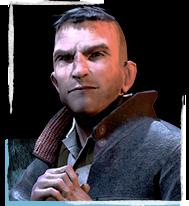 He’s the newest survivor. He specializes in defending his teammates. His perks allow him to get 50% more bloodpoints each time he takes a hit or rescues a survivor from a hook, up to 200%. If in bleeding state, you can burst in speed and dash forward to avoid getting hit and to recover himself from dying state.

Every survivor has 7 health status’, 1 escape and 1 disconnected status.
These statuses are: 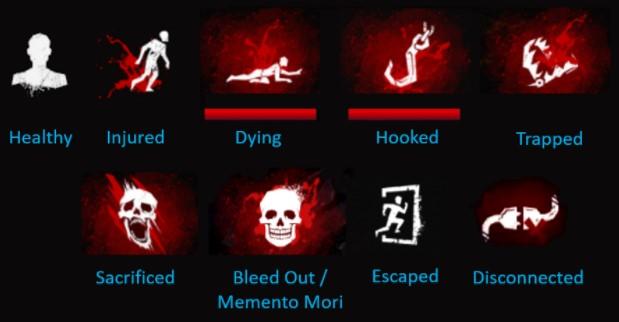 The state you start the match with. A healthy survivor is not injured, neither producing pain noises.

The state you get when you get hit once by the killer, step on a beartrap, or get hit by the Huntresses’ hatchet. An injured survivor produces very high pain groans, leaves blood tracks and moves slower than the usual. You can be healed by teammates, by yourself with a medkit or Claudette Morel’s unique perk, “Self Care”.

The state you get when you take damage when already in Injured Status. Your survivor will start to crawl on the ground, while bleeding out(yes, you can die while in this state). The killer may pick you up while you’re defenseless and try to kill you on sacrifice hooks. You may recover up to 85% of your health while laying on the ground, but you’ll need another survivor to aid you, unless you’re using David King’s perk “No Mither” or Bill Overbeck’s “Unbreakable”.

The state you get when the killer hangs you on one of his sacrificial hooks. You’ll have a health bar that depletes with time. If your health reaches half, you are going to the Struggle State, where you’ll need to hit SPACEBAR multiple times to survive. Other survivors are able to save you 2 times max. If you get hanged for the third time, you will instantly die.

The state you get when you step on a beartrap. You will need to attempt to escape it, and depending on what perks the killer’s using, you can be forced into Dying Status even if you’re 100% healthy. Other survivors may help you aswell.

The state you get if you get killed while hanging on a sacrificial hook. You can no longer play that match, only spectate the other remaining players.

The state other players get when they quit or disconnect from the match. If one of the survivors disconnects before the game starts, you’ll need to repair 4 generators instead of 5.

Tips for Surviving and Outplaying Killers 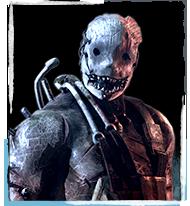 Uses beartraps to hunt his prey. He’ll probably set them up on places with tall grass, on windows or in the middle of pallet drops.
If one of his traps gets disarmed or destroyed, he’ll get an aura warning leading to where the trap was placed.
Can be countered by using toolboxes or Jake Park’s “Saboteur” perk. Destroy his traps and he’ll end up being a regular killer with absolutely no skills to use against you.
Avoid trying to escape by vaulting windows or running without paying attention to your surroundings. 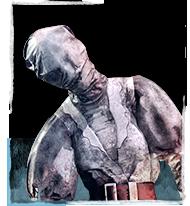 Her weak spots are field of view and movement.
Playing against her as a survivor, the best option is to hide behind props instead of running.
Her abilities allow her to teleport long distances based on the time she channels it.
If she’s been channeling teleportation for a long time(4-5s+), sprint directly at her. She’ll teleport far away from you, and you’ll escape her easily.
Her skill channeling is easily spotted. She will raise her glowing left hand pointing to the direction she will teleport. 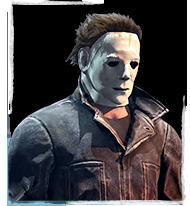 Avoid getting in his line of sight. He’ll get more powerful the more he channels his skill on you.
Avoid trying to escape him by using windows, he can vault over them faster than all of the other killers.
Beware of your surroundings. The Shape’s terror radius while he’s stil level 1 is basically null. He can be channeling his abilities while behind you, and you’ll won’t even notice. 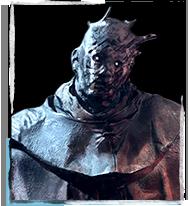 Whenever he turns invisible, you’ll hear an fading-out audio, and when he turns visible, you’ll hear and fading-in audio.
While he’s invisible, he can still be noticed by his groaning and blur around his character.
A great item against him is the flashlight. While he’s invisible, or casting his skill, you can aim the lantern at him(torso/face) and make him get burned. He’ll be stunned for 5 seconds while you can easily escape. 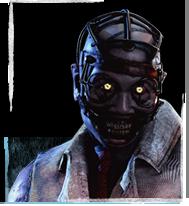 Do not stay in the same spot for too long, otherwise your sanity will begin to fade.
Avoid his terror radius, since it makes your survivor go mad.
Try to predict his shock therapy skill. If struck by it, your character will scream and begin to lose sanity, increasing the chances of your character randomly scream. 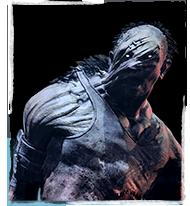 In my opinion, he is the easiest killer to play against.
Avoid open areas, without props, constructions or walls.
His chainsaw will break the wooden pallet INSTANTLY.
He dashes forward with his chainsaw, and if he hits a survivor, the player’ll be automatically forced into dying state. 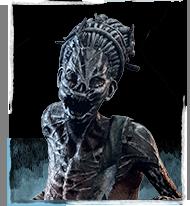 Her traps can be destroyed by aiming at them with a flashlight.
When trying to rescue a teammate, crouch past her traps, they are not going to trigger. 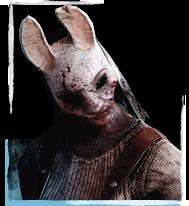 Avoid being out in the open. She is the only killer that has long-distance directly damage dealing.
If being chased by her, stay behind walls, trees, stones or constructions.
She is the most slow killer in the game, making it easy for getting away from her.
She needs to harvest her hatches in lockers.
Do not crouch to dodge her hatchets. Their hitbox is relatively large, so it won’t matter.

Firecrackers that burst into flames, producing loud bangs and intense light flashes. They can be used as a diversion or a blinding device. If you drop it while being chased, the chances of blinding the killer are very high. But beware, if you use it without caution, you may end up blinding your own teammates.

They can be used to blind killers, destroy The Hag’s traps and burn The Wraith while he’s invisible. The best option is to use them while the killer is destroying the wooden pallets.

Medkits allow you to unlock the action to heal yourself. They also increases the healing speed, and depending on the add-ons you have on, they can heal you up to three times.

Toolboxes allow you to destroy the killer’s sacrificial hooks, turn on generators faster and break beartraps. Some of its add-ons may increase the chance of triggering a skillcheck.

Keys can help you track down the hatch, generators, players, the killer, chests, everything, depending on which add-ons you have on. If you have the Skeleton Key, you are able to open the hatch whenever it spawns.

Maps allow you to track down generators, players, etc. and just like the keys, it depends on which add-ons you have on it.

Status Effects are proficiency indicators for survivors while interacting with a generator, totem, chest, teammate or sacrificial hooks.

Displays if the player’s cleansing speed is faster or slower than usual.

Displays if the player’s item consumption rate is increased or decreased.

Displays if the healing speed is faster or slower than usual.

Displays if the repair speed is faster or slower than usual.

Displays if the action progression speed is faster or slower than usual.

Displays if the sabotaging speed is faster or slower than usual.

There are four ways to score points as a survivor. 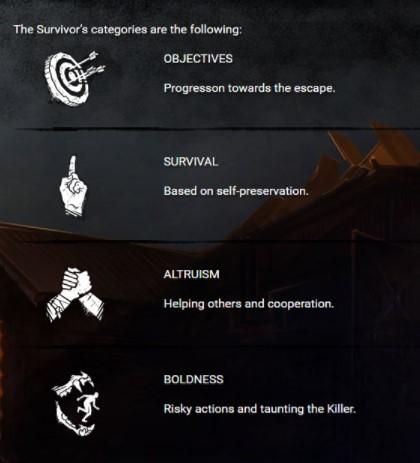 Such as repairing generators, opening exit gates or escaping.

Such as healing yourself, escaping from the hook(by yourself) or searching chests.

Such as saving other players from sacrificial hooks, healing them or doing a co-op action.

Such as taunting the killer, dropping pallets on him, blinding him, doing risky actions that may draw his attention to you.

are on your account, which means you can spend the points you earned, for example, as Claudette Morel to level up Meg Thomas. You can choose not to spend them, but they are capped at 500.000.

Ranking up as a Survivor

Ranks are skill measures in Dead by Daylight. Dead by Daylight – How to Escape when the Hatch is Closed

You are alone, the hatch just got closed by the killer and you have to escape by 1 of the 2 doors. Problem is, you don’t have enough time to […]

Dead by Daylight – How to Unlink Cosmetics

As you may know, the developers added a Promo Code Service to the in-game shop with new 4.10 patch. This guide contains all valid codes and will be updated as […]